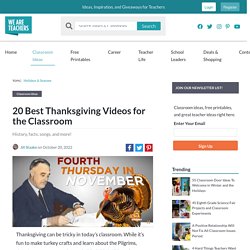 While it’s fun to make turkey crafts and learn about the Pilgrims, there’s a more nuanced story behind this holiday. These Thanksgiving videos can help you share a variety of viewpoints with your students. Learn about the traditional stories and indigenous perspectives, plus find fun songs, facts, and read-alongs. 13 American Colonies. Native Americans for Kids: Cherokee, Apache, Navajo, Iroquois and Sioux. What they didn't teach you about the first Thanksgiving in school. The story of the first Thanksgiving, as told to American children, goes something like this: When the Pilgrims first made it to Plymouth Rock, they suffered through a desperate winter and had great difficulty surviving. 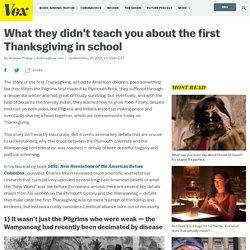 But eventually, and with the help of Squanto the friendly Indian, they learned how to grow food. Finally, despite mistrust on both sides, the Pilgrims and Indians ended up making peace and eventually sharing a feast together, which we commemorate today on Thanksgiving. This story isn't exactly inaccurate. Thanksgiving. American English to British English Vocabulary. While pronunciation, grammar, and spelling are among the many differences between American and British English, perhaps the most difficult to navigate is the difference in American and British vocabulary and word choice. 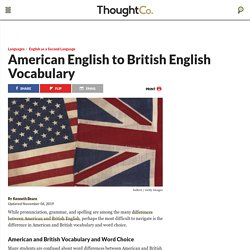 American and British Vocabulary and Word Choice Many students are confused about word differences between American and British English. Generally speaking, it's true that most Americans will understand British English speakers and vice versa despite the many differences. As your English becomes more advanced, however, it becomes more important to decide which form of English you prefer. Once you've decided, try to stick to one form or the other in all aspects including pronunciation differences: General American or Received Pronunciation. The following list provides common American English vocabulary and word choices and their British English equivalents arranged in alphabetical order. Now, test your knowledge with the two quizzes below. Answers. Kortfilmsklubben - engelska: The neighbors' window.

Sambandsord/linking words – Ett öppet klassrum. Homework Help & Study Guides For Students. Which vs. That: How to Choose. In a defining clause, use that.In non-defining clauses, use which.Remember, which is as disposable as a sandwich bag. If you can remove the clause without destroying the meaning of the sentence, the clause is nonessential and you can use which. People use which and that every day. Just because these words are common doesn’t mean they’re easy to use. How to make a bucket list. A bucket list (in case you didn't know) is a list of things you want to do before you kick the bucket. 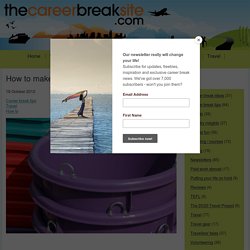 I personally can't stand those '100 things to do before you die' lists because they're not personal enough. Why should someone else tell you what to do? So here are some tips on making your own bucket list - focused on long-term travel and adventure cos that's what we know. Start with the easy stuff. Free Printable Word Lists. Welcome to the printables page! 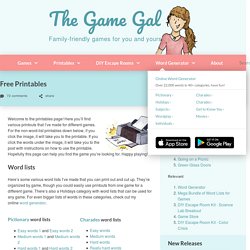 Here you’ll find various printouts that I’ve made for different games. For the non-word-list printables down below, if you click the image, it will take you to the printable. If you click the words under the image, it will take you to the post with instructions on how to use the printable. Hopefully this page can help you find the game you’re looking for. Happy playing! Word lists. How did English become the world’s most spoken language? Five hundred years ago, between five and seven million people spoke English, almost all of them living in the British Isles. 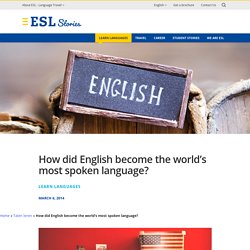 Kiddle - visual search engine for kids. Charlie and the Chocolate Factory-Listening skill. Swedish word of the day: sportlov. The sportlov usually lasts for one week and, depending on where you live in Sweden, comes as early as February 11th-17th or as late as the week of March 4th-10th. 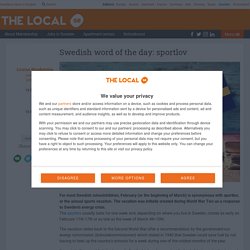 The vacation dates back to the Second World War after a recommendation by the government-run energy commission (bränslekommissionen) which stated in 1940 that Sweden could save fuel by not having to heat up the country's schools for a week during one of the coldest months of the year. It was initially named kokslov (named after the high-carbon content fuel coke), but eventually changed its name to instead match the winter sports activities on offer for the children on vacation. Så får hon eleverna att våga prata. BBC Learning English - Pronunciation. Activities for Students. 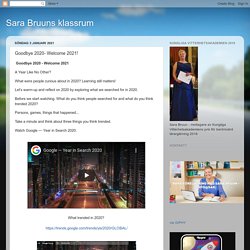 What were people curious about in 2020? Learning still matters! Let's warm-up and reflect on 2020 by exploring what we searched for in 2020. Before we start watching. Persons, games, things that happened... Ten ways to learn new words as a language learner. 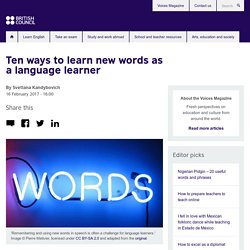