At least 12 dead in Paris after attack on satirical newspaper:Wednesday 7 January 2015. Firefighters and rescue members stand in front of the Paris offices of Charlie Hebdo, a satirical newspaper, after a shooting (REUTERS) Hooded gunmen stormed the Paris offices of a weekly satirical magazine renowned for lampooning radical Islam, killing at least 12 people, including two police officers in the worst militant attack on French soil in recent decades. 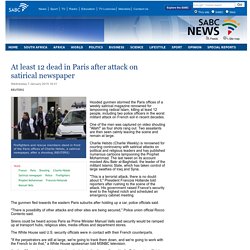 One of the men was captured on video shouting "Allah! " as four shots rang out. Two assailants are then seen calmly leaving the scene and remain at large. Charlie Hebdo (Charlie Weekly) is renowned for courting controversy with satirical attacks on political and religious leaders and has published numerous cartoons lampooning the Prophet Mohammad.

"This is a terrorist attack, there is no doubt about it," President Francois Hollande told reporters after rushing to the scene of the attack. The gunmen fled towards the eastern Paris suburbs after holding up a car, police officials said. "They're coming out. "I am extremely angry. Al Qaeda in Yemen claims responsibility for Paris attack:Wednesday 14 January 2015. World leaders joining Paris march to honour attack victims:Sunday 11 January 2015. Security forces will be on the highest alert for the event, which will attended by about 40 heads of state and government. 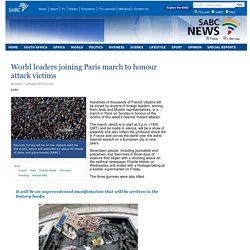 (SABC) Hundreds of thousands of French citizens will be joined by dozens of foreign leaders, among them Arab and Muslim representatives, in a march in Paris on Sunday in honour of the victims of this week's Islamist militant attacks. The march, which is to start at 3 p.m. (1400 GMT) and be made in silence, will be a show of solidarity and also reflect the profound shock felt in France and across the world over the worst Islamist assault on a European city in nine years. Seventeen people, including journalists and policemen, lost their lives in three days of violence that began with a shooting attack on the satirical newspaper Charlie Hebdo on Wednesday and ended with a hostage-taking at a kosher supermarket on Friday.

The three gunmen were also killed. It will be an unprecedented manifestation that will be written in the history books. Brothers behind Paris attack had weapons training in Yemen: sources:Sunday 11 January 2015. The brothers who carried out the bloodiest Islamist attack in Paris. 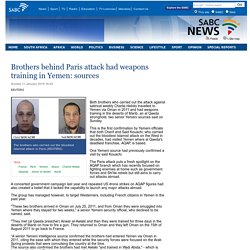 (REUTERS) Both brothers who carried out the attack against satirical weekly Charlie Hebdo travelled to Yemen via Oman in 2011 and had weapons training in the deserts of Marib, an al Qaeda stronghold, two senior Yemeni sources said on Sunday. This is the first confirmation by Yemeni officials that both Cherif and Said Kouachi, who carried out the bloodiest Islamist attack on the West in decades, had visited Yemen where al Qaeda's deadliest franchise, AQAP, is based. One Yemeni source had previously confirmed a visit by said Kouachi. The Paris attack puts a fresh spotlight on the AQAP branch which has recently focused on fighting enemies at home such as government forces and Shi'ite rebels but still aims to carry out attacks abroad.

A concerted government campaign last year and repeated US drone strikes on AQAP figures had also created a belief that it lacked the capability to launch any major attacks abroad. SABC News - Paris attack suspect met prominent al Qaeda preacher in Yemen :Friday 9 January 2015. One of the suspects met U.S. 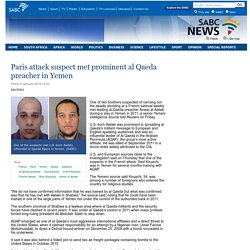 -born Awlaki, influential al Qaeda figure in Yemen. (SABC) One of two brothers suspected of carrying out the deadly shooting at a French satirical weekly met leading al Qaeda preacher Anwar al Awlaki during a stay in Yemen in 2011, a senior Yemeni intelligence source told Reuters on Friday. U.S. -born Awlaki was prominent in spreading al Qaeda's militant message to European and English-speaking audiences and was an influential leader of Al Qaeda in the Arabian Peninsula (AQAP), the group's most active affiliate.

U.S. and European sources close to the investigation said on Thursday that one of the suspects in the French attack, Said Kouachi, was in Yemen for several months training with AQAP. The Yemeni source said Kouachi, 34, was among a number of foreigners who entered the country for religious studies. Suspect hunted over Paris attacks left France last week: sources:Sunday 11 January 2015. Hayat Boumeddiene has been described as "armed and dangerous". 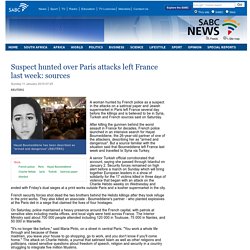 (REUTERS) A woman hunted by French police as a suspect in the attacks on a satirical paper and Jewish supermarket in Paris left France several day before the killings and is believed to be in Syria, Turkish and French sources said on Saturday. After killing the gunmen behind the worst assault in France for decades, French police launched in an intensive search for Hayat Boumeddiene, the 26-year-old partner of one of the attackers, describing her as "armed and dangerous". But a source familiar with the situation said that Boumeddiene left France last week and travelled to Syria via Turkey. A senior Turkish official corroborated that account, saying she passed through Istanbul on January 2. France pursues female suspect after deadly siege:Saturday 10 January 2015. French police officers are in high alert following violence that ensued as of Wednesday. 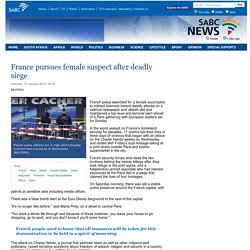 (REUTERS) French police searched for a female accomplice to militant Islamists behind deadly attacks on a satirical newspaper and Jewish deli and maintained a top-level anti-terrorist alert ahead of a Paris gathering with European leaders set for Sunday. AU Commission Chair slams Paris attack:Thursday 8 January 2015. The AU Commission Chair has called Wednesday's deadly shooting as "a horrific and barbaric terrorist attack". 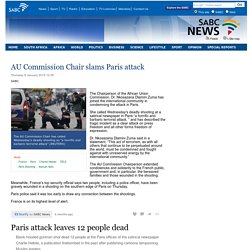 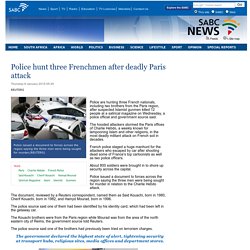 (REUTERS) Police are hunting three French nationals, including two brothers from the Paris region, after suspected Islamist gunmen killed 12 people at a satirical magazine on Wednesday, a police official and government source said. The hooded attackers stormed the Paris offices of Charlie Hebdo, a weekly known for lampooning Islam and other religions, in the most deadly militant attack on French soil in decades. French police staged a huge manhunt for the attackers who escaped by car after shooting dead some of France's top cartoonists as well as two police officers.

About 800 soldiers were brought in to shore up security across the capital. SA government condemns Paris attack:Thursday 8 January 2015. Twelve people were killied on Wednesday in Paris, France. 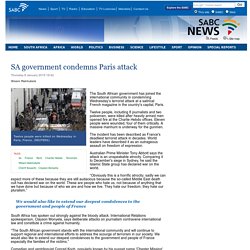 (REUTERS) The South African government has joined the international community in condemning Wednesday’s terrorist attack at a satirical French magazine in the country's capital, Paris. Twelve people, including 8 journalists and two policemen, were killed after heavily armed men opened fire at the Charlie Hebdo offices. Eleven people were wounded, four of them critically. A massive manhunt is underway for the gunmen. Obama condemns cowardly, evil attack in Paris:Wednesday 7 January 2015. Barack Obama said he has reached out to French President Francois Hollande(SABC) President Barack Obama on Wednesday condemned what he called the "cowardly, evil" attack against a satirical newspaper in Paris and offered US assistance to the French government. 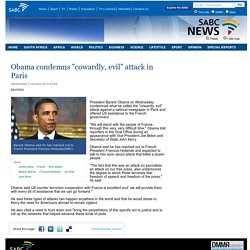 "We will stand with the people of France, through this very, very difficult time," Obama told reporters in the Oval Office during an appearance with Vice President Joe Biden and Secretary of State John Kerry. Obama said he has reached out to French President Francois Hollande and expected to talk to him soon about attack that killed a dozen people. "The fact that this was an attack on journalists, an attack on our free press, also underscores the degree to which these terrorists fear freedom of speech and freedom of the press," he said.

Obama said US counter terrorism cooperation with France is excellent and” we will provide them with every bit of assistance that we can go forward. "