Earthquakes - Q-files Encyclopedia. Many earthquakes take place where one tectonic plate slides down beneath in another in what is called a subduction zone. 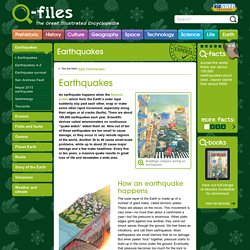 Shock waves are sent out in all directions when, deep under the ground, the locked plates suddenly "give". A subduction zone How an earthquake happens The outer layer of the Earth is made up of a number of giant slabs, called tectonic plates. These are always on the move. P- and S-waves travelling through the Earth's interior Shock waves The sudden jolt of a quake usually lasts no more than a few minutes and may be over in just a few seconds. P-waves (1) squeeze and stretch the rocks.

P-waves (1) and S-waves (2) Shock waves radiate from the epicentre like ripples on a pond. There are different types of shock waves. Customers in a cafe experience an earthquake. Effects of a quake The shock waves hurtling through the crust cause the ground to shake. A road cracks open along a fault line, with one side slipping down a few centimetres. Earthquake Facts And Figures. 29 November 2010 What are earthquakes? 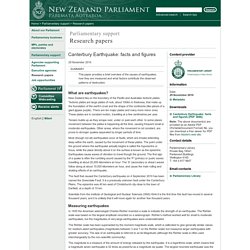 New Zealand lies on the boundary of the Pacific and Australian tectonic plates. Tectonic plates are large plates of rock, about 100km in thickness, that make up the foundation of the earth's crust and the shape of the continents (like pieces of a giant jigsaw puzzle). There are ten major plates and many more minor ones. These plates are in constant motion, travelling at a few centimetres per year. Tension builds up as they scrape over, under or past each other. Most (though not all) earthquakes occur at faults, which are breaks extending deep within the earth, caused by the movement of these plates. The fault that caused the Canterbury earthquake on 4 September 2010 has been named the Greendale Fault. Scientists from the Institute of Geological and Nuclear Sciences (GNS) think it is the first time this fault has moved in several thousand years, and it is unlikely that it will move again for another few thousand years. Measuring earthquakes Aftershocks.

Earthquakes And Tsunamis. Almost every year, a large earthquake occurs somewhere in the world and captures the public's attention. 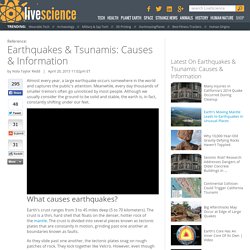 Meanwhile, every day thousands of smaller tremors often go unnoticed by most people. Although we usually consider the ground to be solid and stable, the earth is, in fact, constantly shifting under our feet. What causes earthquakes? Earth's crust ranges from 3 to 45 miles deep (5 to 70 kilometers). The crust is a thin, hard shell that floats on the denser, hotter rock of the mantle. As they slide past one another, the tectonic plates snag on rough patches of rock. An earthquake occurs when the pressure built up along a fault becomes stronger than the pressure holding the rocks together.

Even though the tectonic plates slide at a regular rate over time, the way that faults release stored energy is different with each earthquake, said Shimon Wdowinski, a geophysicist at the University of Miami's Rosentiel School of Marine & Atmospheric Sciences. Tsunamis Measuring earthquakes. Earthquakes. Shaking Intensity. It is a modern human tendency to focus on the number of an earthquake—specifically, the magnitude, or what people used to call the “Richter scale.” 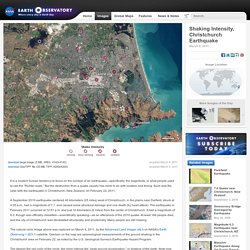 But the destruction from a quake usually has more to do with location and timing. Such was the case with the earthquake in Christchurch, New Zealand, on February 22, 2011. A September 2010 earthquake centered 40 kilometers (25 miles) west of Christchurch, in the plains near Darfield, struck at 4:35 a.m., had a magnitude of 7.1, and caused some structural damage and one death (by heart attack). The earthquake in February 2011 occurred at 12:51 p.m. and just 10 kilometers (6 miles) from the center of Christchurch. It had a magnitude of 6.3, though was officially classified—scientifically speaking—as an aftershock of the 2010 quake. The natural-color image above was captured on March 4, 2011, by the Advanced Land Imager (ALI) on NASA’s Earth Observing-1 (EO-1) satellite. Volcanos. Earthquakes.