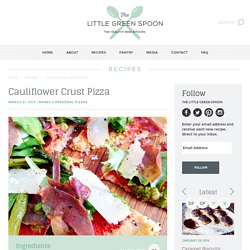 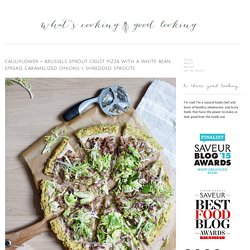 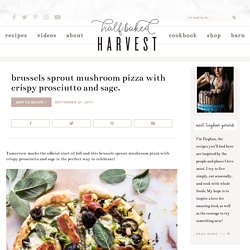 Meyer Lemon Focaccia with Hemp Seeds and Herbs Recipe. You can make this. 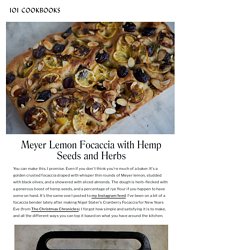 I promise. Even if you don't think you're much of a baker. It's a golden crusted focaccia draped with whisper thin rounds of Meyer lemon, studded with black olives, and a showered with sliced almonds. The dough is herb-flecked with a generous boost of hemp seeds, and a percentage of rye flour if you happen to have some on hand. It's the same one I posted to my Instagram feed. The pre-bake: The shot above is what the focaccia looks like prior to baking. 3-minute pizza : Italian Sausage, Spinach, Cherry tomatoes, Artichoke Hearts and Mozzarella Cheese. 1) Prepare the dough: in a bowl, mix the yeast, sugar & water. 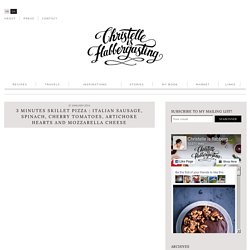 Let stand 10 min., bubbles should form on the surface. 2) In a large bowl, combine flour and salt. Whole Wheat Spinach and Artichoke Pizza + Video. - Half Baked Harvest. All Mondays should include (cheesy) pizza!! 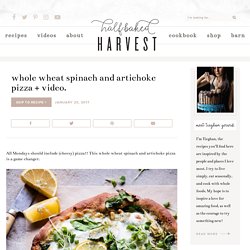 This whole wheat spinach and artichoke pizza is a game changer. I mean, Mondays can be slightly intimidating, but ending the day with pizza gives us something to actually get excited about. I mean, right? RIGHT. This Whole Wheat Spinach and Artichoke Pizza is basically everything and anything you’d want in a pizza. Plus, this pizza only takes around thirty minutes from start to finish, thus allowing it fit into my “30 Minute Monday” theme for 2017. So hey, hi! Easy Pizza Focaccia Bread with Tomato Sauce and Green Onion. This Gluten-Free Zucchini Pizza Crust Changes Everything - The Chalkboard. Zucchini crust or bust! 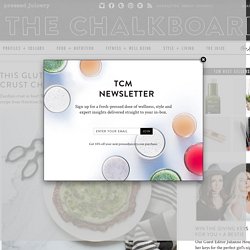 With three layers of veggie goodness and no dairy or gluten, this zucchini pizza recipe from Nutrition Stripped’s McKel Hill means every night can be pizza night… WE WOULDN’T EXPECT pizza to be a solution for loading up on more greens, but are happy to be surprised by this veggied version from plant-based blogger McKel Hill. This green pizza from her new cookbook, Nutrition Stripped piles in three distinct layers of fresh green goodness, and its health factor isn’t diluted by piles of cheese or a carby crust. Find the recipe below and get even more from this plant-based blogger babe here! Falafel pizza recipe. At Well+Good, we’re constantly coming across genius recipes—whether it’s on Instagram, in soon-to-be published cookbooks, or directly from buzzy food bloggers themselves. 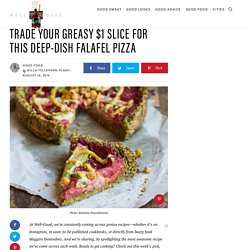 And we’re sharing, by spotlighting the most awesome recipe we’ve come across each week. Ready to get cooking? Very Green Vegan Flatbread Pizza. Who says that pizza is all about melting mozzarella and decadent toppings? 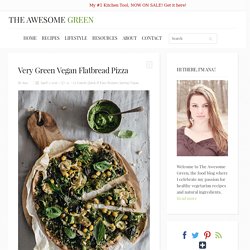 Why wouldn’t it be about a healthy and tasty meal your body will actually enjoy? Half Baked Harvest - Made with Love. Hello Pizza Thursday… and thank you for saving my sanity. 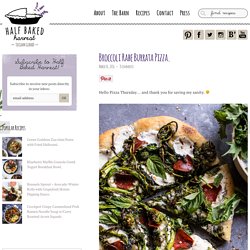 Soo, you think we can all get in on this whole Pizza Thursday thing?? I know it doesn’t quite have the ring of Taco Tuesday, but let’s be real, anything with the word pizza in it sounds pretty dang GOOD. Ok, ok and pizza has a way of curing all. Meaning stress, headaches and all the “oh man, I wish it was Friday” thoughts that are flowing through your head right now. It’s true, pizza is a magical food full of carbs and cheese…aka two of my most favorite ingredients! Pizza For Breakfast: A Seriously Healthy Way To Make It Happen - The Chalkboard. We can’t condone an early A.M. delivery, but if you’re jonesing for pizza for breakfast, here’s how to make it work… What. Pizza for breakfast? We give you full permission to indulge.

Pizza with Crispy Kale, Butternut Squash, Bacon & Smoked Mozzarella Recipes from The Kitchn. You'll only need a small butternut squash for this recipe. A wee two-pounder is plenty for both pizzas, and you'll still sometimes have leftover squash. But since butternuts can be so time-consuming to prepare, I often roast a larger squash and then save or freeze the extra for other meals during the week.

I’ve got a new Facebook page–and I hope you’ll visit me there! I’m perpetually grateful to all of you who’ve “liked” my Diet, Dessert and Dogs page, but it’s time to move on. With a new cookbook on the horizon and lots of other cool sugar-free, anti-candida and allergy-friendly offerings in the works, I wanted a Facebook page that reflected all of that (along with DDD too, of course!). To keep it simple, this one is just called “Ricki Heller,” and I’ll be posting all the same things I now do on the DDD page (which will be shut down on August 31, 2013).

So please hop over to the new page and “like” it so you won’t miss out when things switch over this summer! Hard to believe, but today is the HH‘s and my 16th anniversary! Our friends often tell me that the HH and I perfectly embody the expression, “opposites attract.” Gluten-Free Tuesday: Easy Pizza Crust. Golubka Kitchen.

Spelt Pizza with Caramelized Onion, Artichokes and Chard. Anti-candida, sugar-free, grain-free, vegan Caramelized Onion, Shaved Butternut and Goat Cheese Pizza Recipe. When I was in grade school, there was exactly one boy (let’s call him Jerome) in our school who had a food allergy (to peanuts). Jerome was already a bit too large (he towered over the rest of us; even in grade three, he was already level with our teacher, Mrs. B’s shoulders); a bit too goofy (he had one of those snorty-hiccuping laughs, sounding slightly porcine and aquatic at the same time); and a bit too fleshy, with excess skin seeming to hang from his waistband and cheeks, his complexion as white and matte as newly painted classrooms after summer break.

I always felt sorry for him. Even though he sometimes played the class clown out in the school yard, I never saw him smiling around food. He carried his dietary restrictions around like a backpack full of rocks–at once too heavy, yet requiring great attention to avoid causing injury–while the rest of us flaunted our peanut butter and jelly sandwiches for lunch. Adapted from this recipe by Cara Lyons For the Crust: For the Toppings: Anti-Candida, Sugar-Free, Gluten Free, Grain-Free Vegan Pizza Crust Recipe. [Breakfast pizza: topped with sweet potato-almond spread, chopped chard, and cinnamon-coated apple slices] Although the anti-candida diet doesn’t require its victims suckers followers to eat a grain-free diet, I’ve found more and more that I tend to find it easier to adhere to the torment misery regimen when I eat grain free. But let’s face it: cutting out yeast, sugars, gluten, fermented foods, and basically all common allergens (the critria of the ACD) is hard enough; why would someone also want to cut out all grains as well?

(For some insightful, inspiring musings on living a life with food restrictions–for whatever reasons–take a peek at Iris’s honest post about her own dietary parameters). As it stands, my friends generally think of me as pretty wacky (oh, wait, they thought that even before the ACD) and it’s always a challenge to join in on “normal” social activities while on this diet. That’s why I vowed to make my ACD-friendly foods just as appetizing as “regular” food.