Bystander Effect - Definition, Examples and Experiment. Bystander Effect Definition The bystander effect, also called bystander apathy, is a term in psychology that refers to the tendency of people to take no action in an emergency situation when there are others present. This phenomenon is highly studied in the field of sociology. Bystander Effect Explained Psychologically, there are many causes of the bystander effect. They range from thinking someone else is in charge, to not understanding the gravity of a situation because there are other people not taking action. This concept was popularized after the 1964 killing of Kitty Genovese in New York City, giving rise to the term, “Genovese Syndrome”. The figure depicts individuals engaged in bystander apathy. As the above image shows, there are a number of potential reasons that people will use to ignore an emergency situation.

Bystander Effect Examples In the event of an emergency, the first decision that a person needs to make is whether or not an emergency actually exists. Quiz. The Science of Empathy.

This video has provided its audience with a platform to comprehend the bystander effects. It supports the different views of individuals' perspectives. A bystander effect is when a group would unlikely render help thinking that someone else would. The experiment was conducted in a group of 10, 5 and followed by being alone. It was timed and observed how long they took to help the host as he struggled with the setting up the tent alone. A Group of 10 took 8 minutes and 1 second, a group of 5 took 7 minutes and 25 seconds and when alone, individual took 3 minutes and 19 seconds. I am surprised to see that being alone would render help much faster than in groups. As in groups, help among friends/ colleagues/ family members can support each other to help the situation. – amandang005

In this video, it talks about the bystander effect. It caused by the diffusion of responsibility and willingness to help. The diffusion of responsibility is when one decides to enter into the situation to help. However, willingness to help will be one would think that the Doctor or the police will have more knowledge to help. Individuals Focus vs Group: Individuals look at others and conform to not help and people in group pays attention to each other. Personal responsibility occurs whether to help before coming into a conclusion. In the workplace, the bystander effects take place with the idea, opinion, and concern. The worker can choose to be a bytsander or report to the managment. – amandang005

Factors contributed for not support in emergency crisis. Research suggests that bystander action in medical emergencies is complex. 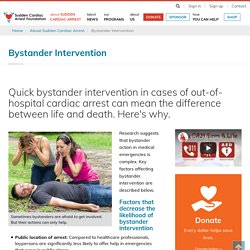 Key factors affecting bystander intervention are described below. Factors that decrease the likelihood of bystander intervention Public location of arrest: Compared to healthcare professionals, laypersons are significantly less likely to offer help in emergencies that occur in public places. Ignorance and confusion: When people do not understand what is happening or are confused about the unfolding situation, they are less likely to intervene.

Difficulty in recognizing medical emergencies: It is difficult to perceive that a medical emergency is occurring because indications often are ambiguous. The Bystander Effect and Altruism. Learning Objectives Explain the factors that influence human altruism, including reciprocal altruism and diffusion of responsibility.

Go to YouTube and search for episodes of “Primetime: What Would You Do?” You will find video segments in which apparently innocent individuals are victimized, while onlookers typically fail to intervene. The events are all staged, but they are very real to the bystanders on the scene. The entertainment offered is the nature of the bystanders’ responses, and viewers are outraged when bystanders fail to intervene. Figure 1. When Do People Help? Social psychologists began trying to answer this question following the unfortunate murder of Kitty Genovese in 1964 (Dovidio, Piliavin, Schroeder, & Penner, 2006; Penner, Dovidio, Piliavin, & Schroeder, 2005). More recently, in 2010, Hugo Alfredo Tale-Yax was stabbed when he apparently tried to intervene in an argument between a man and woman.

Bystander Effect: What Is It and What You Can Do About It. What the bystander effect looks like A little after 3 a.m. on March 13, 1964, Catherine “Kitty” Genovese parked her car and walked to her apartment in Queens, New York, after finishing her shift as a bar manager.

Many of us have either encounter as a person in need of help or in a position of helping. Often caught in a situation, "how do I help?", "will I make a difference?", "maybe I am not needed.". These are questions or self-thoughts we have when we had before stepping in to assist. Questions can give a wide range of responses and bring us to confusion with initial intention. Ultimately, each of us is given choices to help or not. We should take responsibility as it either hinders help to people or usher assistance. – amandang005

Serial killer Winston Moseley was out to victimize someone that night. Genovese became his target. When he followed her, she ran. As Moseley reached her and began stabbing her with a hunting knife, Genovese screamed, “Oh, my God, he stabbed me! When lights in surrounding apartments flipped on and one man called out his window, the attacker ran and hid in the shadows. There was widespread public condemnation of the witnesses who did not come to Kitty Genovese’s aid.

The related terms “bystander effect” and “diffusion of responsibility” were coined by social psychologists as a result of this research.