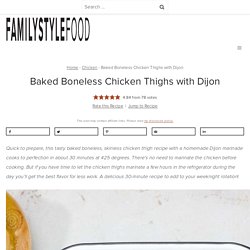 Please read my disclosure policy. Quick to prepare, this tasty baked boneless, skinless chicken thigh recipe with a homemade Dijon marinade cooks to perfection in about 30 minutes at 425 degrees. There’s no need to marinate the chicken before cooking. But if you have time to let the chicken thighs marinate a few hours in the refrigerator during the day you’ll get the best flavor for less work. 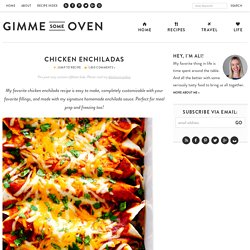 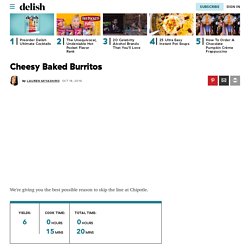 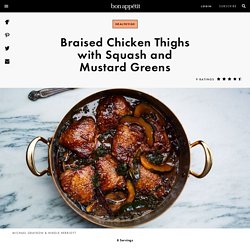 I modified a few things: maple syrup because I had no brown sugar, and then I added some flower to the sauce to make more gravy instead of letting it reduce. It was just so yummy. Everyone from my toddler to my grandpa had two servings. Easy One Skillet Creamy Cilantro Lime Chicken. Easy skillet cilantro lime chicken is creamy, full-flavored and made just 20 minutes! 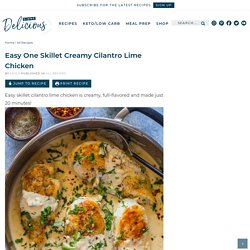 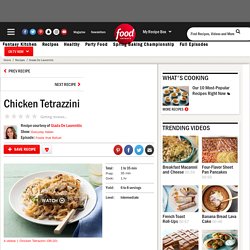 Preheat the oven to 450 degrees F. Spread 1 tablespoon of butter over a 13 by 9 by 2-inch baking dish. Melt 1 tablespoon each of butter and oil in a deep large nonstick frying pan over medium-high heat. Sprinkle the chicken with 1/2 teaspoon each of salt and pepper. Add the chicken to the hot pan and cook until pale golden and just cooked through, about 4 minutes per side. Meanwhile, add 1 tablespoon each of butter and oil to the same pan. Melt 3 more tablespoons butter in the same pan over medium-low heat. Bring a large pot of salted water to a boil. Transfer the pasta mixture to the prepared baking dish. Honey-Garlic Slow Cooker Chicken Thighs Recipe. Chicken Tetrazzini Recipe. Crock Pot Buffalo Chicken Sandwiches.

You will love these 3-ingredient Crock Pot Buffalo Chicken Sandwiches! 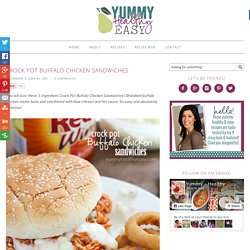 Shredded buffalo chicken inside buns and smothered with blue cheese and hot sauce. So easy and absolutely delicious! Two. That’s the number of Christmas gifts I’ve purchased for my kids to this date AND the number of weeks until the big day. Ugh. How many gifts have you bought so far? Every goshdarn year, I say “I’m doing my Christmas shopping super early next year” and every goshdarn year I don’t. 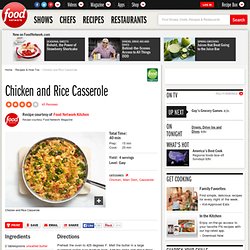 Melt the butter in a large ovenproof skillet over medium heat. Add the garlic and about three-quarters of the scallions and cook, stirring occasionally, until soft, about 2 minutes. Add the broccoli, chicken, rice, tomato, 1 teaspoon salt, and pepper to taste; stir to combine. Whisk the chicken broth and sour cream in a bowl, pour into the skillet and bring to a simmer. Turn on the broiler. Per serving: Calories 626; Fat 32 g (Saturated 16 g); Cholesterol 186 mg; Sodium 1,299 mg; Carbohydrate 38 g; Fiber 3 g; Protein 45 g Photograph by Christopher Testani. Coconut lime baked chicken - Running to the Kitchen. This coconut lime baked chicken is served with coconut infused mango sticky rice for a deliciously crispy, tender and tropical chicken dinner. 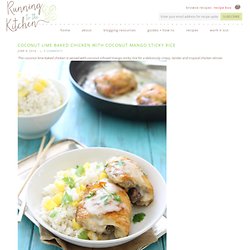 Having eaten more Cliff bars and beef jerky over the last week than I probably have in my entire life, one thing that makes easing back into real life after vacation a little easier is the fact that at least I have access to real food 24/7 without having to pay some exorbitant tourist price for it. Before we left, I had just found a new place nearby to buy organic chicken at a very reasonable price. Poblanos Stuffed with Cheddar and Chicken. User reviews made it? 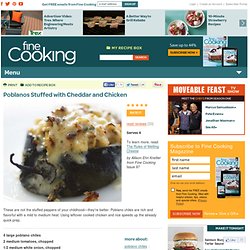 RATE IT! By user-3572737, 7/7/2014 This was EXCELLENT! 30-Minute Dinner Recipes. Sriracha Chicken. I feel like all I’ve purchased in the last two weeks while on this paleo challenge thing has been meat. Last week I spent $85 on just beef, chicken and turkey and thought that was going to last me at least until the end of this month, especially since it’s just me in the house during the week. Ha. Not at this rate. And trying to figure out what to DO with all that meat is no easy task. I’m trying to keep things interesting because if I can’t eat dessert after a meal, the meal itself better damn well be bursting with flavor. Chicken and Bulgur Salad with Avocado Recipe - Marcia Kiesel. Lasagna Cupcakes Recipe. Fajita Seasoning Recipe. Chicken-and-Cheese Enchiladas Recipe : Food Network Kitchens.

Directions Preheat the broiler. Slice half of the onion into thin rings and set aside. Place the other onion half, tomatillos and serranos on a foil-lined baking sheet and broil until the vegetables are soft and slightly brown, 7 to 10 minutes, turning as needed. Transfer the vegetables and any liquid to a blender, add the broth and puree. Season with 1/2 teaspoon salt and the sugar. Meanwhile, stack the tortillas, wrap in a damp paper towel and microwave just until warm and soft, 1 minute; keep covered. Pour the tomatillo sauce over the enchiladas and top with the remaining 1/2 cup shredded cheese. Per serving: Calories 626; Fat 32 g (Saturated 13 g); Cholesterol 98 mg; Inside-Out Chicken Cordon Bleu Recipe : Food Network Kitchens. Directions Mix the jam, thyme, and salt and pepper to taste in a bowl. Lay out a long piece of plastic wrap on a cutting board.

Place the chicken on the plastic and brush half of the jam mixture evenly on top of each breast. Mound a quarter of the cheese on each piece of chicken, then wrap 2 slices of ham around each breast to cover the cheese. Hoisin-Glazed Chicken With Cabbage Slaw. Crispy Chicken Thighs With Cauliflower and Cilantro. Chicken Salad with Grapes and Pecans Recipe. Pioneer Woman’s Buttermilk Fried Chicken. Thursday, October 29, 2009 I know there are certain foods that I really shouldn’t mess with, one of them being fried chicken. And after all these years of cooking, last week was the very first time that I made real buttermilk fried chicken without tinkering, gourmetizing or ethnic-tizin’ with funky ingredients like panko, garam masala, five spice or corn flakes.

Just fried chicken straight up. And it’s all thanks to my good friend Ree of The Pioneer Woman, who just came out with her very first cookbook called The Pioneer Woman Cookbook: Recipes from an Accidental Country Girl. One of the best parts of blogging is the sisterhood bond that blossoms between us gals. If you are lucky enough to be near any of the cities that Ree and family will stop at, please do go seek her out. Pecan Crusted Chicken with Mustard Sauce. Hawaiian Chicken Kabobs Recipe. Zucchini Noodles with Chicken and Tangy Peanut Sauce.