The Dude Diet: Buffalo Chicken "Fingie" Edition- Domesticate ME! Are you still with me, dudes? 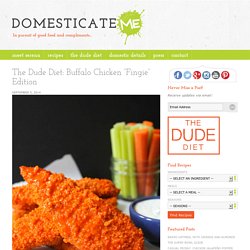 I know it’s been a while, and I have no excuse, so I’ll just say: I’m sorry. Please forgive me. I sincerely hope your moobs have not returned in my absence. Truth be told, it’s been a rough summer for The Dude Diet. Buttermilk roast chicken. Without a doubt, the very best part of fried chicken is the battered, seasoned, gold-tinged and impossibly crisp exterior. 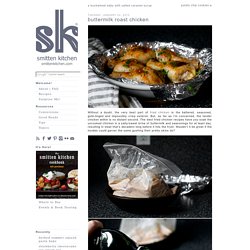 But, as far as I’m concerned, the tender chicken within is no distant second. The best fried chicken recipes have you soak the uncooked chicken in a salty/sweet brine of buttermilk and seasonings for at least day, resulting in meat that’s decadent long before it hits the fryer. Wouldn’t it be great if the insides could garner the same gushing their pretty skins do? Canal House's crispy chicken thighs recipe: A variation on Paul Bertolli's genius bottom-up technique. Photo by James Ransom This post originally appeared on Food52. 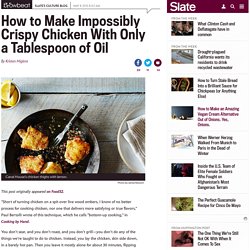 “Short of turning chicken on a spit over live wood embers, I know of no better process for cooking chicken, nor one that delivers more satisfying or true flavors,” Paul Bertolli wrote of this technique, which he calls “bottom-up cooking,” in Cooking by Hand. You don’t sear, and you don’t roast, and you don’t grill—you don’t do any of the things we’re taught to do to chicken. Roasted Chicken with Garlic and Bread recipe on Food52.com. Cooking is more fun with friends. 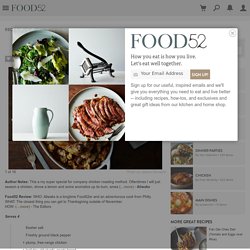 Find your friends who are already on Food52, and invite others who aren't to join. Let's GoLearn more Join Our Community Follow amazing home cooks. Collect recipes and articles. Baked Boneless Buffalo Wings - Love to be in the Kitchen. A healthier alternative to fried Buffalo Wings. 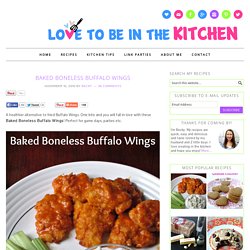 One bite and you will fall in love with these Baked Boneless Buffalo Wings! Perfect for game days, parties etc. (Updated 1/2014 Since I first posted this recipe over 3 years ago I have made it countless times. My husband and I love these and make them all the time! Maintenance - Food52. Recipe: Parmesan-Crusted Chicken with Kale Caesar Salad and Toasted Hazelnuts - Blue Apron. Hunter's-Style Chicken recipe on Food52.com. Cooking is more fun with friends. 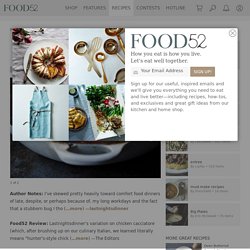 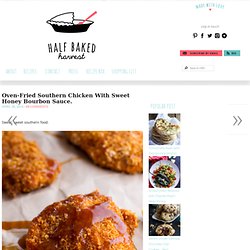 Chinese Orange Chicken. When my dad worked at the airport, he loved going to Panda Express for lunch. 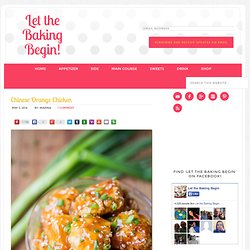 There, he would always get the same exact thing every time. Half noodles, half rice & a good load of their Orange Chicken. Slightly Spicy, Tangy, with pronounced Orange flavor it was party on a plate. The Chinese Orange Sauce that you drown the chicken in, is so amazing you will be licking your plate to make sure you get all of it in! I substituted the orange juice mentioned in the original recipe with the orange juice concentrate for a more pronounced orange flavor, and I think it was perfect!

This recipe by Damned Delicious requires you to marinate the chicken for about 30 minutes before you can start cooking it so a bit of prep work required. Double Crunch Honey Garlic Chicken Breasts : food. Easy Chicken Tacos. One of my...ahem...New Year's Resolutions was to start blogging about simple weeknight dinners. 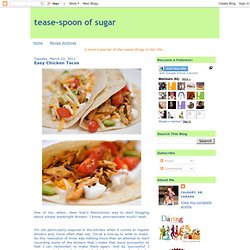 I know, procrastinate much? Yeah. I'm not particularly inspired in the kitchen when it comes to regular dinners and, more often than not, I'm at a loss as to what to make. So this resolution of mine was nothing more than an attempt to start recording some of the dinners that I make that were successful so that I can remember to make them again. And by 'successful' I mean merely having fed at least 3 of the 4 members of my family. So bear with me. If someone else happens to find something here that inspires them in their daily struggle to feed their family, then that's a major bonus. This recipe for Easy Chicken Tacos was in the America's Test Kitchen magazine. Recipe for Easy Chicken Tacos (Source: The Best of America's Test Kitchen 2011) 3 Tbsp. unsalted butter 4 garlic cloves, minced 2 tsp. minced canned chipotle chile in adobo sauce (use sparingly unless you like spice!) 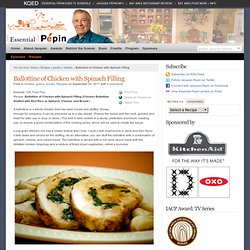 Showy enough for company, it can be prepared up to a day ahead. (Freeze the bones and the neck, gizzard, and heart for later use in soup or stock.) This bird is best cooked in a sturdy, preferably aluminum, roasting pan, to ensure a good condensation of the cooking juices, which will be used to create the sauce. Long-grain Wehani rice has a chewy texture that I love.

Serves 4 1 chicken (about 3 3/4 pounds), boned 1/4 teaspoon salt 1/4 teaspoon freshly ground black pepper Red Rice Stuffing or Spinach, Cheese, and Bread Stuffing (see recipes below) Preheat the oven to 400 degrees. Lay the chicken skin side down on the work surface and sprinkle with the salt and pepper.