Recipe: sweet & sour chicken. I was ridiculously excited when I came across this recipe for homemade sweet and sour chicken. 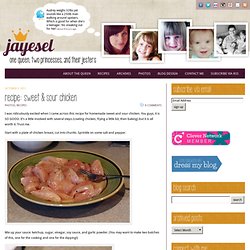 You guys, it is SO GOOD. It’s a little involved with several steps (coating chicken, frying a little bit, then baking) but it is all worth it. Trust me. Start with a plate of chicken breast, cut into chunks. Sprinkle on some salt and pepper. Mix up your sauce: ketchup, sugar, vinegar, soy sauce, and garlic powder. Dip the chicken into cornstarch and then in beaten egg. Transfer the chicken to a baking dish and coat all the pieces with the sauce. Bake that for about an hour, turning the pieces once or twice. Serve it all together and enjoy! Chinese Pineapple Chicken. I call this dish Pineapple chicken. 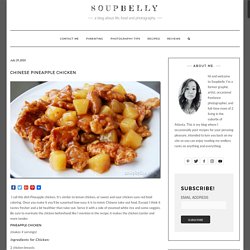 It’s similar to lemon chicken, or sweet and sour chicken sans red food coloring. Once you make it you’ll be surprised how easy it is to mimic Chinese take-out food. Kung Pao Chicken Recipe. Here’s the recipe you all might have been waiting for – the legendary Kung Pao Chicken! 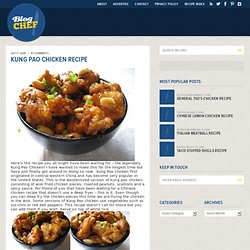 I have wanted to make this for the longest time but have just finally got around to doing so now. Kung Pao chicken first originated in central-western China and has become very popular in the United States. This is the westernized version of kung pao chicken consisting of wok fried chicken pieces, roasted peanuts, scallions and a spicy sauce. Asian Chicken Salad. One of my strengths as a teacher is the impromptu game. 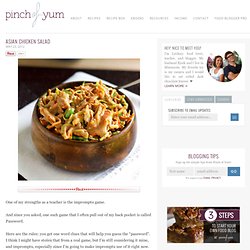 And since you asked, one such game that I often pull out of my back pocket is called Password. Here are the rules: you get one word clues that will help you guess the “password”. I think I might have stolen that from a real game, but I’m still considering it mine, and impromptu, especially since I’m going to make impromptu use of it right now. Ready? Chinese Lemon Chicken. Most sane people keep a drawer full of delivery menus for the sole purpose of...ordering delivery. 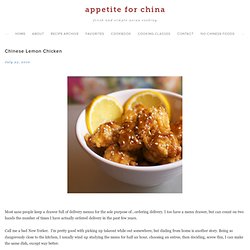 I too have a menu drawer, but can count on two hands the number of times I have actually ordered delivery in the past few years. Call me a bad New Yorker. I'm pretty good with picking up takeout while out somewhere, but dialing from home is another story. Being so dangerously close to the kitchen, I usually wind up studying the menu for half an hour, choosing an entree, then deciding, screw this, I can make the same dish, except way better. This hubris usually leads me to spend another couple of hours ransacking my cabinets, schlepping to the grocery store, figuring out a strategy, then executing it. Honey Soy Chicken Wings. I first made these honey soy chicken wings a few years ago when I was working long hours in San Francisco. 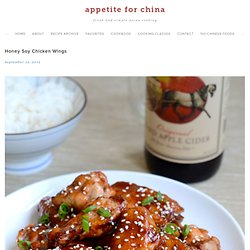 I wanted a nice comforting dish that didn't involve standing in front of the stove for too long. And preferably something that could be reheated easily the next day. The result was these chicken wings, which take only 10 minutes of marinating time and 30 minutes in the oven. They are as delicious as they are easy, packed with flavor from the honey, hoisin sauce, sesame oil, and soy sauce. Try them out and let me know what you think! I want to share a recipe that has always been dependable, through good days and bad. True, they're more of an appetizer than a full-on meal, but sometimes what you really need after a day of answering calls and working with spreadsheets is to just plop in front of the TV, drink cheap wine from a Mason jar, and eat chicken wings with your hands.

Coca-Cola Chicken Wings. Here's a goody from the archives. 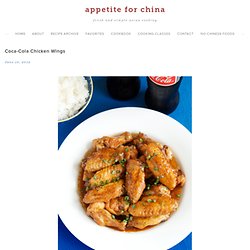 A number of you have tried this recipe for Coca-cola Chicken wings that I first posted in March 2011. You wouldn't guess just how delicious it is based on the simple ingredients. In this recipe that's a favorite of home cooks in China, Cola-Cola and soy sauce meld to form a great sweet and savory glaze for the chicken. You get a great caramelized flavor without the work! Sweet and Sour Pork. For the past few weeks I've been working on a new project that has left me little time for cooking. 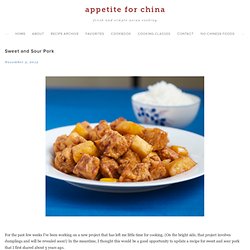 (On the bright side, that project involves dumplings and will be revealed soon!) In the meantime, I thought this would be a good opportunity to update a recipe for sweet and sour pork that I first shared about 5 years ago. Since 2008 I've made this multiple times, and retested it over and over for my cookbook. It's the best I've found for making crispy pork that's reminiscent of takeout without all the grease and gloppiness. Kung Pao Chicken. Kung pao chicken, known by most fans as a Sichuan dish, has a much-debated origin within China. 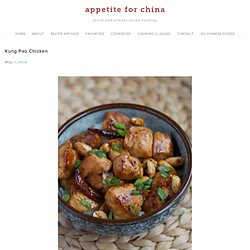 One popular theory is that Ding Baozhen, a Qing Dynasty governor in Sichuan province, tried it at a Sichuan restaurant and liked it so much that the dish was named after his official title, Gong Bao (which became “Kung Pao” in English). Others, however, dispute its origin in Sichuan, claiming the governor brought it from his childhood home in Guizhou province. Whichever the case, the important thing is that this highly addictive stir-fried chicken continues to be one of the most popular Chinese dishes in China as well as America. The succulent, complex sauce of salty, sweet, sour, and spicy flavors is hard to pass up.

One faux-pas restaurants in the U.S. sometimes make is adding tons of vegetatables like bell peppers and broccoli. General Tso’s Chicken. This recipe for General Tso's chicken has been the most popular on this site since I first posted it in 2009. 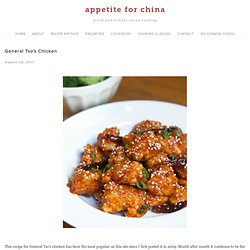 Month after month it continues to be the most viewed and searched for recipe here. I love that so many of you, presumably, have visited on a mission to replicate this tasty dish from a favorite take-out. Over the past few months, I've been testing and retesting this recipe for my cookbook, and want to share a new revised version. Spicy Wok-Fried Chicken with Chilis. I had been meaning to update this recipe for a while. Whenever I teach Intro to Sichuan cooking classes, we focus on simple and easy-to-love stir-fry dishes such as Kung Pao Chicken, Mapo Tofu, and Dan Dan Noodles. But anyone who has spent enough time in good Sichuan restaurants is bound to eventually try a dish listed as Chongqing chicken, Sichuan chicken with chilis, wok-fried chicken, or a number of similar names. (Lazi jiding is the name in Mandarin.) And inevitably in every class, when I go around the room during the intro ice-breaker and have students list their favorite Sichuan dish of all time, at least one or two will mention this dish.

Ga Kho- Vietnamese Caramelized Spicy Chicken. Ga Kho- Vietnamese Caramelized Spicy Chicken Judge me if you’d like, but I sure miss being able to eat American Chinese food. Not the fancy stuff or dim sum… I’m talking about Panda Express-style orange or General Tso’s chicken. And while I’m in disclosure mode, I may as well admit that I wouldn’t mind a goldfinger or crab rangoon either. Sure, this caramelized spicy chicken isn’t Chinese food. But the good news? I’m thinking this is a dish that could appeal to the whole family- just adjust the Thai chiles according to heat tolerance and preference.

General Tso's Chicken Recipe. I was thinking of a Szechuan style spicy dish for my Chinese shebang dinner for Father's Day. My mother (who has awesome timing) sent me a link for a recipe for General Tso's Chicken ( shortly after. This recipe is based on that recipe, which originally appeared in The Chinese Kitchen by Eileen Yin-Fei Lo.Mix together the marinade ingredients and add it to the chicken. Ensure the chicken is throughly coated then set it aside for at least 15 minutes.Combine the sauce ingredients in a bowl and set aside.Heat the peanut oil in your wok over high heat till it starts to smoke.

You can test this by putting in prawn crackers into the oil. If they bloom out sufficiently quickly, then it’s hot enough.One at a time, bread the chicken pieces with the breadcrumbs. General Tso's Chicken...possibly the best food ever. A recipe! Can you believe it? The last couple of posts were just chatting chatting chatting. What happened to the food on this food blog? It is here. Waiting. Sesame Chicken Recipe. Sesame Chicken Recipe I first discovered Sesame Chicken when I was eating at a Chinese buffet. The juicy chicken and the amazing sauce had me hooked from the first bite. I knew right then that I had to make this at home and after trying a couple different recipes, I came up with one that I enjoyed the most. As you might have noticed I garnished this dish with not only the traditional sesame seeds but sliced scallions as well.

One Pan Sticky Thai Chicken Wings. Friday… thank goodness you’re here. Seriously. And the only reason I’m saying that is because I had an almost actual heart attack last night while watching Grey’s Anatomy, another show I’m not so invested in until the season finale rolls around, and really, I think I almost died.