POULET DE BRESSE AOP. Poulet de Bresse – BRESSE GAULOISE- Will it be all that it’s cracked up to be? Well I just want to start by saying that it’s nearly midnight here in the UK and I am thinking about some of my eggs in the incubator Believe me when I say I have a fair few in there, now there is one particular group of eggs I am particularly interested in, and they are due to hatch in about a weeks time. – A Breed of Poultry named The Bresse Gauloise or in French, Poulet de Bresse. 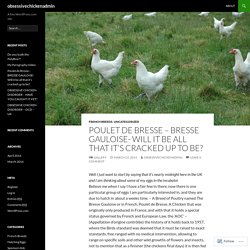 A Chicken that was originally only produced in France, and with that it holds a special status governed by French and European Law, the ‘AOC’ – (Appellation d’origine contrôlée) the history of it holds back to 1957, where the Birds standard was deemed that it must be raised to exact standards, free ranged with no medical intervention, allowing to range on specific soils and other wild growths of flowers and insects, not to mention that as a finisher (the chickens final days) it is then fed on milk!

– Does this add to the distinct flavour of the this Breed? The American Bresse? Bresse Gauloise. 15 Amazing facts about Eggs ! Cooking, Science, Everything. Wyandotte Chickens. Uses: Utility (meat) and exhibition. 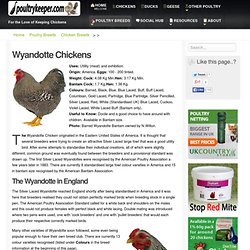 Many other varieties of Wyandotte soon followed, some even being popular enough to have their own breed club. New colour varieties are still being created. Dual Purpose Breed Chickens for Sale. Chicken Breed Profiles - Breeds for the Small Farm. Once you've decided to keep chickens, you need to choose the chicken breed or breeds you are going to raise on your small farm or homestead. 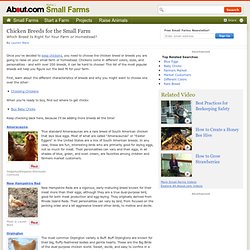 Chickens come in different colors, sizes, and personalities - and with over 200 breeds, it can be hard to choose! This list of the most popular breeds will help you figure out the best fit for your farm. First, learn about the different characteristics of breeds and why you might want to choose one over the other: Choosing Chickens When you're ready to buy, find out where to get chicks: Buy Baby Chicks Keep checking back here, because I'll be adding more breeds all the time! 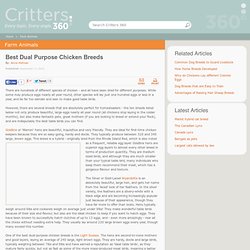 While some may produce eggs nearly all year round, other species will lay just one hundred eggs or less in a year, and be far too slender and lean to make good table birds. However, there are several breeds that are absolutely perfect for homesteaders - the ten breeds listed below not only produce beautiful, large eggs nearly all year round (all chickens stop laying in the colder months), but also make fantastic pets, great mothers (if you are looking to breed or extend your flock), and are indisputably the best table birds you can find. Goldline or 'Warren' hens are beautiful, inquisitive and very friendly. Wyandottes. History Wyandottes originate from the United States and no one really knows which breeds were used to create the Wyandotte breed. 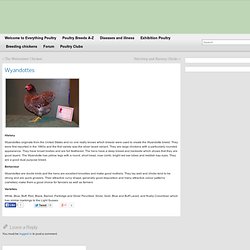 They were first reported in the 1860s and the first variety was the silver laced variant. Sussex - Chicken breeds. The Sussex is an old but exceptional dual purpose breed, developed using the old Kent fowl (now extinct), Dorking and Brahma.

The Sussex was primarily used as a white skinned table bird to fulfil the London market during the second half of the 19th century. The breed has the best egg laying capabilities of all traditional British breeds and its table qualities are superior than the slightly better laying Rhode Island Red and Leghorn. The Sussex has a graceful carriage with a long, broad and flat back. Legs and feet are white. Face, comb, earlobes and wattles are red. 5 Best Breeds For Meat Chickens. With the growing popularity of raising backyard chickens comes an increasing interest in raising meat chickens. 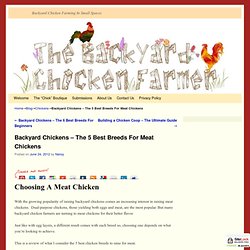 Dual-purpose chickens, those yielding both eggs and meat, are the most popular. But many backyard chicken farmers are turning to meat chickens for their better flavor. Buff Orpington Chicks for Sale. Hatching year round. 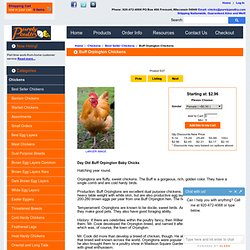 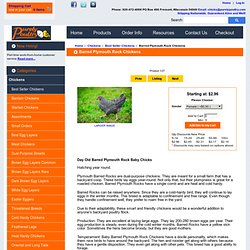 Plymouth Barred Rocks are dual-purpose chickens. They are meant for a small farm that has a backyard coop. Poultry Research, Commercial & Scientific Poultry Information. Home > ... 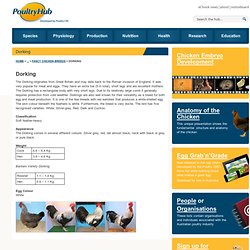 > Fancy Chicken Breeds > Dorking The Dorking originates from Great Britain and may date back to the Roman invasion of England. It was very popular for meat and eggs. They have an extra toe (5 in total), short legs and are excellent mothers. The Dorking has a rectangular body with very short legs. Due to its relatively large comb it generally requires protection from cold weather.

Home > ... > Fancy Chicken Breeds > Sussex As its name might suggest, the Sussex originates from the United Kingdom. It is a great breed for either meat or eggs, depending on how it has been bred. Though not as efficient as the Australorp, the Sussex has the ability to lay up to 280 eggs annually. Poultry Research, Commercial & Scientific Poultry Information. Home > ... > Fancy Chicken Breeds > Wyandotte Apart from its appearance, a major factor in favour of the Wyandotte is the ease of which these birds can be kept. This breed originated in the US and with the cooperation of the British, the Wyandotte is now a well-rounded dual purpose bird. The Wyandotte can be expected to lay approximately 180-200 eggs a year, which makes it a reasonable egg producer. Poultry Research, Commercial & Scientific Poultry Information. Home > ... > Fancy Chicken Breeds > Rhode Island Rhode Island chickens are a very popular dual purpose poultry breed.

The Red variety is capable of producing 200- 250 large eggs annually, however the cock is very aggressive. This must be taken into account before choosing this particular breed as a pet or mixing it with other varieties. The Rhode Island has Yellow shanks and performs well under most conditions and rarely goes broody. Poultry Research, Commercial & Scientific Poultry Information. Home > ... > Fancy Chicken Breeds > Plymouth Rock The Plymouth rock is a very popular breed in the United Kingdom and the United States of America. It is a friendly, hardy, dual purpose breed, which was originally used to produce commercial broilers. This breed demonstrates great mothering skills and on average produces 160-180 eggs per year. Due to these qualities, the Plymouth is an ideal bird for beginners. Poultry Research, Commercial & Scientific Poultry Information.

Poultry Research, Commercial & Scientific Poultry Information. Cochin chicken. A Blue Cochin hen Quick Facts[edit] Cochin ancestors first originated in the United States after the Chinese chicken, which was tight-feathered and had moderate to no feathers on their legs, was brought to the eastern coast around 1845. They soon became a hit, and Shanghai lovers took the fluffiest and most feather legged chickens to breed them for those traits exactly. Their result was very nice, with the fully feather-legged and fluffy chicken we now call the Cochin. This began what was known as the “hen craze,” which stretched from the mid-1800s to the early 1900s, when people around the world bred chickens purely for their looks, rather than to create a better egg layer and such.

History[edit] Characteristics[edit] Cochin rooster As above, the most distinctive feature of the Cochin is the excessive plumage that covers leg and foot. See also[edit] Delayed feathering in chickens, a condition found in this breed. References[edit] - Standard of Perfection External links[edit] Plymouth Rock chicken. Orpington chicken. Brahma chicken. Chicken Breeds - Brahma.