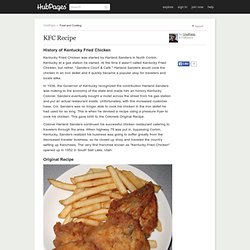 At the time it wasn't called Kentucky Fried Chicken, but rather, "Sanders Court & Cafe. " Harland Sanders would cook the chicken in an iron skillet and it quickly became a popular stop for travelers and locals alike. In 1936, the Governor of Kentucky recognized the contribution Harland Sanders was making to the economy of the state and made him an honory Kentucky Colonel. Sanders eventually bought a motel across the street from his gas station and put an actual restaurant inside.

Colonel Harland Sanders continued his successful chicken restaurant catering to travelers through the area. Original Recipe Chicken Most companies try not to let their restaurant recipes get into the hands of the general public. Because of the secrecy of KFC's Original Recipe, nobody can honestly claim to know they can make this at home. 17 KFC Original Recipe Exposed In 22 Pages. Believe it or not? 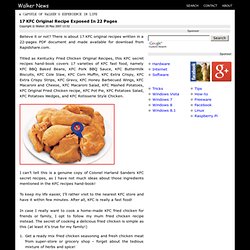 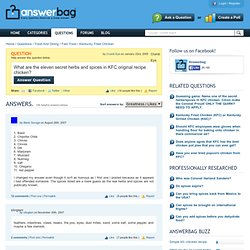 Counting the one's that have passed away, Margret Sanders the Colonel's daughter was the first to know other than the Colonel, because she was the "chief taste Tester" when it was being developed. The Colonel's second wife Claudia knows the secret. Sanders' personal secretary, Shirley Topmiller put the recipe in type written form. If she remembered it or past it along is unknown. In 1964 Kentucky Fried Chicken was sold to Jack Massey (money bags) and John Y. KFC Original Recipe Copycat) Recipe - Food.com - 58947. Don’t tell the colonel! KFC recipe may be out - Books - booknews - TODAYshow.com. The obsession started years ago after a challenge from his wife: Could finance manager Ron Douglas, an avid cook and Kentucky Fried Chicken fan, really crack the code to the best-kept culinary secret in the country? 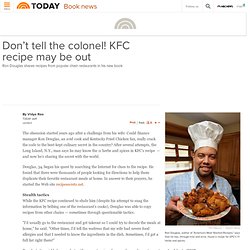 After several attempts, the Long Island, N.Y., man says he may know the 11 herbs and spices in KFC’s recipe — and now he's sharing the secret with the world. Douglas, 34, began his quest by searching the Internet for clues to the recipe. He found that there were thousands of people looking for directions to help them duplicate their favorite restaurant meals at home. Secret recipes of America's favorite restaurants. Kfc original recipe fried chicken - The Secret Recipe Forum. Colonel Sanders' KFC Recipe Revealed! « Wonderment Blog. Colonel Sanders' KFC Recipe Revealed! 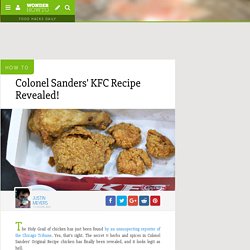 The Holy Grail of chicken has just been found by an unsuspecting reporter of the Chicago Tribune. Yes, that's right. The secret 11 herbs and spices in Colonel Sanders' Original Recipe chicken has finally been revealed, and it looks legit as hell. While a copy of the Original Recipe chicken is locked down tight in KFC's headquarters, another version has been sitting in the photo album of Sanders' second wife, Claudia Ledington, which is now in the possession of her nephew, Joe Ledington.