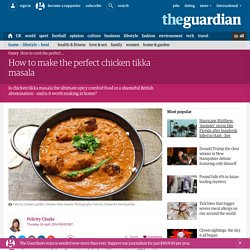 Ahmed Aslam Ali claims he invented the dish, which bears a strong resemblance to Punjabi butter chicken, in his Glasgow restaurant in the early 1970s after a customer complained that his chicken tikka was "a bit dry" – a story repeated by innumerable others, often embellished with the detail that the original sauce was made from tinned tomato soup.

But as credit has also been given to everyone from the last Mughal emperor, Bahadur Shah II, to Tony Blair's friend Sir Gulam Noon and Delhi street food vendors, it seems likely that we will never know who first came up with the idea of smothering tandoori chicken in a rich, tomatoey gravy. Madhur's Chicken Tikka Masala. Probably created in Britain, chicken tikka masala – or CTM as it is often called – is easily the most popular Indian curry in the UK today. 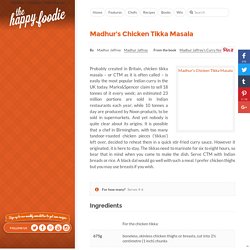 Marks&Spencer claim to sell 18 tonnes of it every week; an estimated 23 million portions are sold in Indian restaurants each year; while 10 tonnes a day are produced by Noon products, to be sold in supermarkets. And yet nobody is quite clear about its origins. Chicken Tikka Masala with Fluffy Basmati Rice. Put the kettle on to boil Heat a large frying pan over medium to high heat and add the garam masala and paprika. 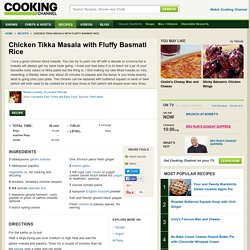 Toast for a couple of minutes then tip the spices onto a plate and set aside. Drizzle some oil into the frying pan. Cut the chicken breasts into bite-sized chunks and fry, tossing from time to time, until brown all over, about 5 minutes. Tip the rice into a medium pan and add the turmeric (or curry powder or saffron strands) if using. While the rice is cooking away, give the chicken a little toss and then trim and finely slice the spring onions (both the green and the white bits), peel and grate the ginger and peel and finely chop the garlic. The English Kitchen: Chicken Tikka Masala. I know . . . 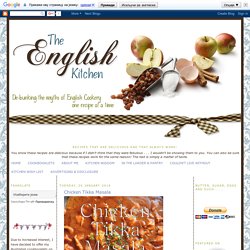 Tuesday is not normally curry night, but I was asked to bring a meal over to a family this week and so I made a Chicken Tikka Masala for them because it was something I could make enough of that it would also feed Todd and myself, and it would be easy to transport. OH, and not forgetting it's delicious! Not surprisingly, Curry is one of the most popular dishes here in the UK. There was a program on the telly a few years ago where they did a run down of the top ten food dishes in the UK, and Curry was the second most popular dish, second only to fish and chips. Chicken Tikka Masala was one of the first dishes I learned to make when I went to Culinary School. Gordon Ramsays Tikka Masala Recipe. Chicken masala Recipe by Bal Arneson. Ingredients View the great selection of wines we've chosen to complement this recipe. 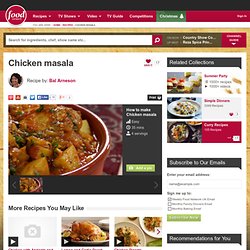 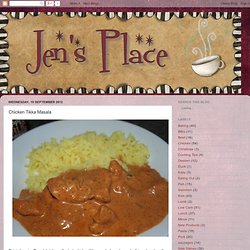 I saw her make this on her show the other night, and it looked easy. All her meals are so easy to do, and always turn out lovely so I really expected this one to. I wasn't as keen on this as I thought I would be, but everyone else ate it. Even my 4 year old ate it, with extra cream added. I am looking forward to trying out more recipes from her book even though I am very disappointed by this one! 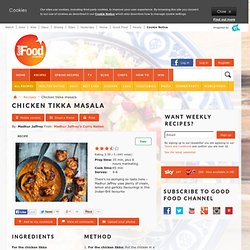 For the chicken tikka: Put the chicken in a bowl and rub in 1¼ teaspoon salt and the lemon juice. Prod the chicken pieces lightly with the tip of a knife and rub the seasoning in again, then set aside for 20 minutes. 2. Add the ginger, garlic, cumin, paprika, chilli powder, whipping cream and garam masala. Mix well, cover and refrigerate for 6-8 hours, though longer will not hurt. 3. 4. 5. 6. 7. 8. For more ideas, take a look at our easy curry recipes Photography ©Jean Cazals. How to Make Heston’s Perfect Chicken Tikka Masala recipe from In Search of Perfection : In Search Of Heston. Our attempt to cook all of Heston’s Perfection recipes continues with the Fat Duck Chef’s Perfect Chicken Tikka Masala recipe. 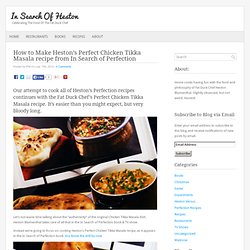 It’s easier than you might expect, but very bloody long. Let’s not waste time talking about the “authenticity” of the original Chicken Tikka Masala dish. Heston Blumenthal takes care of all that in the In Search of Perfection book & TV show. Instead we’re going to focus on cooking Heston’s Perfect Chicken Tikka Masala recipe, as it appears in the In Search of Perfection book. You know the drill by now. Recipes: Heston Blumenthal’s Perfect Chicken Tikka Masala recipe Special Equipment: Pressure Cooker, Spice Grinder, Blender, Metal Skewers, Barbecue, house bricks, Special Ingredients: Melon seeds, black cardomon pods, chickpea flour, Kashmiri chilli powderTime: 3 daysServes: 4 (but we made double, to provide some extra to freeze)Difficulty: Medium Here’s what we’re hoping to achieve.