Horns Offense - Quick Hitters and More - Hoop Student. The Horns offense is a basketball offense that begins with two perimeter players located in the corners, two high post players, and a primary ball handler at the top of the key. 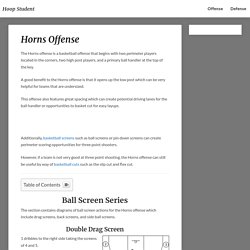 A good benefit to the Horns offense is that it opens up the low post which can be very helpful for teams that are undersized. This offense also features great spacing which can create potential driving lanes for the ball handler or opportunities to basket cut for easy layups. Additionally, basketball screens such as ball screens or pin down screens can create perimeter scoring opportunities for three point shooters. However, if a team is not very good at three point shooting, the Horns offense can still be useful by way of basketball cuts such as the slip cut and flex cut. Ball Screen Series The section contains diagrams of ball screen actions for the Horns offense which include drag screens, back screens, and side ball screens. Double Drag Screen.

The Mirror Drill - Improve Lateral Speed and Quickness. "Out on an Island" - 1v1 Corner to Wing Shooting Drill. This is a great 1v1 shooting drill to use to improve your scoring ability. 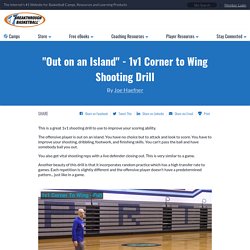 The offensive player is out on an island. You have no choice but to attack and look to score. You have to improve your shooting, dribbling, footwork, and finishing skills. You can't pass the ball and have somebody bail you out. You also get vital shooting reps with a live defender closing out. Another beauty of this drill is that it incorporates random practice which has a high transfer rate to games. Instructions: Legs and Abs Workout. The majority of your power on the bike comes from your legs, so that’s why having a strong posterior chain—the back side of your body that includes your glutes, hamstrings, and calves—is so important. 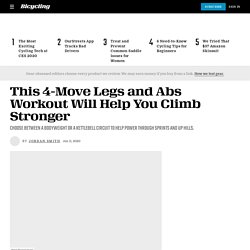 One way to build power in your legs: doing single-leg exercises. That’s because working your muscles in this way helps isolate each leg to build more strength as well as increase mobility, explains Noam Tamir, C.S.C.S., CEO and founder of TS Fitness in New York City. Plus, you’re usually hunched over when you ride, which is why you’ll also want a strong core—essential for holding yourself in an aerodynamic position as well as exploding on the bike during sprints or powering up hills. [Want to fly up hills? Climb! That’s why Tamir created these circuits of legs and abs exercises—one bodyweight circuit and one kettlebell circuit so you can choose from to strengthen your legs and core at the same time. Bodyweight Workout Single Leg Hip Thrust Hollow Body Rocks Alternating Lateral Lunge. 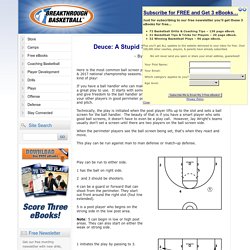 It's really simple, yet highly effective. The best kind of play! If you have a ball handler who can make good decisions in ball screen situations, this is a great play to use. It starts with some good motion that will occupy the help defense and give freedom to the ball handler and the screener to make some plays. It also puts your other players in good perimeter positions for three-point shots on the penetrate and pitch. 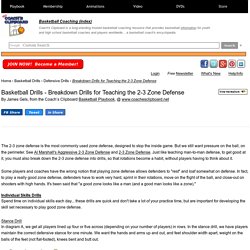 But we still want pressure on the ball, on the perimeter. See Al Marshall's Aggressive 2-3 Zone Defense and 2-3 Zone Defense. Just like teaching man-to-man defense, to get good at it, you must also break down the 2-3 zone defense into drills, so that rotations become a habit, without players having to think about it.

Some players and coaches have the wrong notion that playing zone defense allows defenders to "rest" and loaf somewhat on defense. Individual Skills Drills Spend time on individual skills each day... these drills are quick and don't take a lot of your practice time, but are important for developing the skill set necessary to play good zone defense. Stance Drill In diagram A, we get all players lined up four or five across (depending on your number of players) in rows. Flex Offense - Complete Coaching Guide. Flex Offense Origin Before we get into how to run the flex offense, let’s have a quick look at its history in the game of basketball. 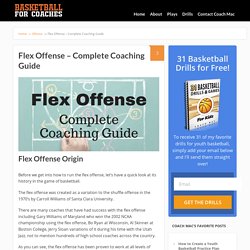 The flex offense was created as a variation to the shuffle offense in the 1970’s by Carroll Williams of Santa Clara University. There are many coaches that have had success with the flex offense including Gary Williams of Maryland who won the 2002 NCAA championship using the flex offense, Bo Ryan at Wisconsin, Al Skinner at Boston College, Jerry Sloan variations of it during his time with the Utah Jazz, not to mention hundreds of high school coaches across the country. As you can see, the flex offense has been proven to work at all levels of basketball.

It is a staple offense among many high school teams.