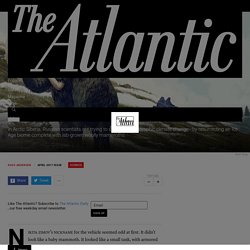 It didn’t look like a baby mammoth. It looked like a small tank, with armored wheels and a pit bull’s center of gravity. Only after he smashed us into the first tree did the connection become clear. We were driving through a remote forest in Eastern Siberia, just north of the Arctic Circle, when it happened. The summer thaw was in full swing. Listen to the audio version of this article:Download the Audm app for your iPhone to listen to more titles. I had never seen Nikita happier. “In general, I like trees,” Nikita said. Behind us, through the fresh gap in the forest, our destination shone in the July sun. 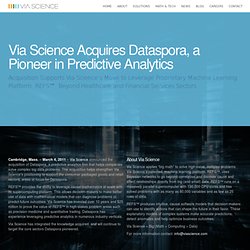 The acquisition helps strengthen Via Science’s positioning to support the consumer packaged goods and retail sectors, areas of focus for Dataspora. REFS™ provides the ability to leverage causal mathematics at scale with its supercomputing platform. This allows decision-makers to make better use of data with mathematical models that can diagnose problems or predict future outcomes. Via Science has invested over 10 years and $25 million to prove the value of REFS™ in high-stakes problem areas such as precision medicine and quantitative trading. Dataspora has experience leveraging predictive analytics in numerous industry verticals. Via Science has integrated the knowledge acquired, and will continue to target the core sectors Dataspora pioneered.

Spacelog: space exploration stories from the original transcripts. 100 Year Starship Study. Why Not Space? 24 views this month; 0 overall Ask a random sampling of people if they think we will have colonized space in 500 years, and I expect it will be a while before you run into someone who says it’s unlikely. 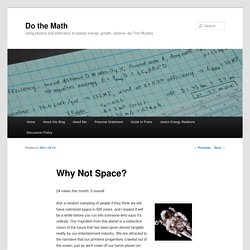 Our migration from this planet is a seductive vision of the future that has been given almost tangible reality by our entertainment industry. We are attracted to the narrative that our primitive progenitors crawled out of the ocean, just as we’ll crawl off our home planet (en masse) some day. I’m not going to claim that this vision is false: how could I know that? But I will point out a few of the unappreciated difficulties with this view. I was completely astonished by the prevalence of the “space” reaction to the inaugural Do the Math post on galactic-scale energy. Celebrating the 20th Anniversary of the Hubble Telescope. The Space Elevator Blog - For scalable, inexpensive access to space… LiftPort Group - The Space Elevator Companies - Home. 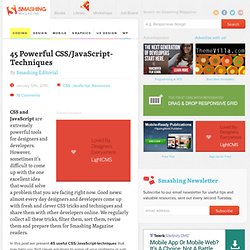 However, sometimes it’s difficult to come up with the one excellent idea that would solve a problem that you are facing right now. Good news: almost every day designers and developers come up with fresh and clever CSS tricks and techniques and share them with other developers online. Ultra Fractal: Advanced Fractal Animation Software. Aesthetics + computation group. Dirty Little Secret - ELLE - Dirty Little Secret Series. 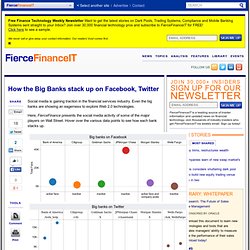 Even the big banks are showing an eagerness to explore Web 2.0 technologies. Here, FierceFinance presents the social media activity of some of the major players on Wall Street. Hover over the various data points to see how each bank stacks up. Dashboard 2 <br /><a href="#"><img alt="Dashboard 2 " src=" height="100%" /></a> So far, six of the top banks command a large Facebook presence. All six of the biggest U.S. financial firms operate a Twitter account, with thousands of followers and daily "tweet" updates.

But in order for banks to fully embrace social media and make them effective tools for the finance industry, they must first conquer regulatory and compliance issues. Truthy. 53) Back It Up - Caro Emerald. SitePoint : Become a Better Web Developer. Gravity. Teamly: individual productivity and team performance management software for businesses. Eddy. ProgrammableWeb - Mashups, APIs, and the Web as Platform.