Anthony J James on LinkedIn: The future of warehouse logistics. These are STO Express’s logistics. How it Works, Particle bulb — Particle Bulb. iCapital Network, Nasdaq Launch Fintech Platform to Bring Liquidity to Private-Equity Investors – IPO Edge. Nano Antennas for Data Transfer – Could Allow Processor Cores to Exchange Data at Speed of Light. Let there be light — and it was directional: The world’s first electrically powered Yagi-Uda antenna was built at the University of Würzburg’s Department of Physics. 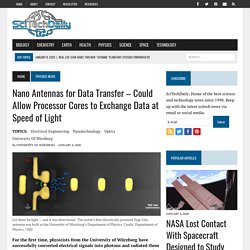 Credit: Department of Physics / JMU For the first time, physicists from the University of Würzburg have successfully converted electrical signals into photons and radiated them in specific directions using a low-footprint optical antenna that is only 800 nanometers in size. Directional antennas convert electrical signals to radio waves and emit them in a particular direction, allowing increased performance and reduced interference. This principle, which is useful in radio wave technology, could also be interesting for miniaturized light sources. After all, almost all Internet-based communication utilizes optical light communication. Electronics & Gadget Stores, Websites & Businesses For Sale. Self serve check-outs: New black.ai tech being tested could stop theft. RIGHT now in a clutch of Australian supermarkets, their locations under wraps, a “hush, hush” plan is underway that could eliminate the temptation to indulge in a sly bit of self-serve checkout theft forever. 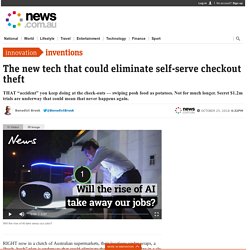 The days of surreptitiously swiping ginger while pretending it’s a cheap potato may soon be gone. And that completely legitimate mistake you keep making of swiping an organic avocado as a non-organic one — well that won’t be happening for much longer either. That’s if a new checkout technology, dreamt up by three Melburnians who met at a coding competition, catches the eye of the big retailers. In trials, it’s already managed to work out what’s in shoppers’ baskets before they even reach the checkout. Keaton Okkonen, co-founder of robotics firm black.ai told news.com.au the system of cameras and sensors could virtually eliminate what he terms self-serve “stock bleed”.

And he has reason to be confident. Smart roads: emerging technologies promising to revolutionise our roads. IN A tech obsessed world constantly looking for the latest innovation, there’s a big part of our daily lives that hasn’t changed much over the years — our roads. 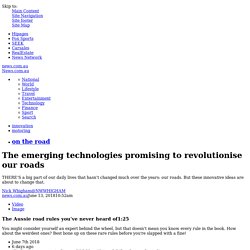 The idea of smart roads that can generate their own electricity to power lights, street signs and electric cars has been around for quite a while but when it comes to the execution, the technology is still in the early stages of development and economic feasibility. However, it’s an idea that has been gaining traction in a number of countries around the world and holds the promise to revolutionise daily transport. A recent report by US firm IDTechEX, which does market research on emerging technologies, has high hopes for new road tech and believes “electrically smart roads” can be a $23 billion industry in 10 years. “We reveal that adoption of electrical smart road technology is rapid and widespread with much more to come,” the report claims, drawing on examples “spanning 37 different technologies in 18 countries”.

LG introduces robots, ThinQ AI, Google Assistant and smart devices. Turn Your Old Asus Routers Into A Mesh Network With This Software Update. Smart homes, blockchain and AI: How tech will change property in 2018. Bolt On Additional Profit to Your Physiotherapy Clinic. As a licensee, you'll be able to offer the back rehabilitation program that currently holds the highest pain reduction success rate based on a study involving 47,692 back patients (Evaluation of medical and economic effectiveness with Matthias Hoppe, Chief Training Officer, FPZ, Germany, David World Research Forum Proceedings 2014). 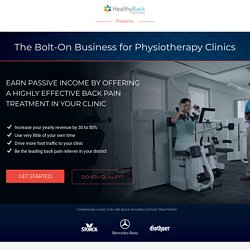 What makes this form of treatment effective for 93.4% of patients? Through the unique design of the HBS Rehabilitation Devices, HBS is the only treatment which enables the targeting of the deep and superficial spinal musculature with strength and range of movement progressions specific to the particular muscles being targeted. No other machines match the completeness of treatment — nor the technological advances, nor the research support and validation — demonstrated by the HBS Devices. Learn more during a briefing session The Only Evidence-Based BACK Rehabilitation Program WITH A 93.4% Success Rate. Synology Cloud Sync: Create a hybrid cloud using Dropbox, Google Drive, and more. Dropbox, Google Drive, OneDrive, and the other cloud drive services have shown considerable growth over the past few years because they're just so incredibly useful. 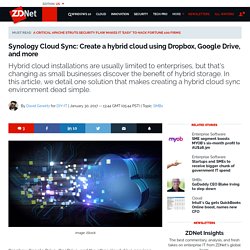 The ability to both store files in the cloud and access them on the desktop has proven a boon for file sharing, collaboration, mobile access, and flexibility. special feature Integrating the Hybrid Cloud As far and fast as cloud computing is embedding itself into the enterprise, there remain many cloud-resistant applications and services.

How to setup multiroom music with Chromecast - CNET. Ever dreamed of having a future home? 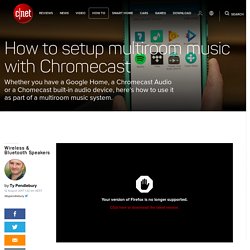 One where your music plays in multiple rooms simultaneously, and from multiple devices, party-style? Google's Chomecast technology, formerly known as Google Cast, can realize that dream for an affordable price. The $35 Chromecast Audio, the Google Home speaker, and numerous other Chromecast built-in devices such as the Sony STR-DN1080 receiver and the JBL Playlist speaker, can now work in concert together throughout your home. You can create groups of multiple devices and send music, news or whatever to any or all of them at the same time, using the Google Home app on your phone. 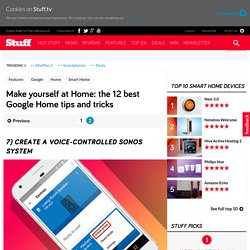 But it is also a much cheaper way to get voice-controlled, multi-room tunes, particularly if you already have a bunch of speakers that play nicely with Chromecast dongles. To set it up, tap the ‘devices’ button in the top right-hand corner of the app to see your list of available sources. Now press the three-dot card menu on one of the devices, and choose ‘create Group’.