Australian researchers claim new internet speed record of 44.2 Tbps. Australia’s internet isn’t exactly world-class, but it could one day lead the world in speed if it’s the first to take advantage of a new discovery by some local scientists. 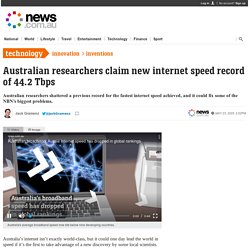 A team of researchers from three Melbourne universities have this week claimed the world’s fastest internet speed using a single optical chip, which they said will facilitate faster networks with more capacity in the future. The new record speed of 44.2tbps (terabits per second) shattered the previous record of 30.1tbps, and the chip used in the latest test is said to have used less than half the spectrum. That speed is roughly one million times the speed you’d currently get on the most popular NBN bundle. The researchers from RMIT, Monash and Swinburne universities used something called a micro-comb to replace 80 separate lasers inside a fibre optic cable with one chip. The researchers focused on the integration because it offered the biggest return on investment.

RELATED: NBN demand surges in pandemic. An ancient sexual energy mushroom is on the brink of mass production. Glen Sycamore is a dating coach who specializes in helping his clientele find love. 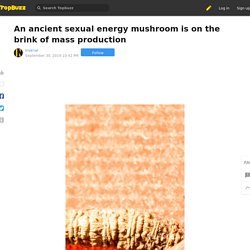 On his website, you’ll find Tinder tips, or an article on “finding a foreign girlfriend” or “how to get out of the friend zone and avoid it forever” You may also find his first-person account of how a fungus often found protruding from the corpse of a Tibetan caterpillar made him an “animal in the sack, with increased level of sexual stamina.”

That mushroom, which Sycamore discusses at length on his blog, is called Ophiocordyceps sinensis (C. sinensis). In nature, the C. sinensis fungus colonizes the larvae of the ghost moth, which lives high in the Tibetan Himalayas. Highest paid jobs: The removalists earning more than doctors. TO EARN big dollars these days you don’t have to spend years at uni. 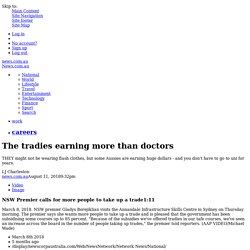 Tradies are pulling in huge amounts of cash, but the riches aren’t spread evenly among them. Not only do they have to work hard, they have to be smart about building their business. When Adrian Fadini started his plumbing business 25 years ago, he was full of youthful vigour and enthusiasm. Extracting drinking water from dry desert air is no longer a pipe dream - Science News - ABC News. Imagine you're stuck in the Australian desert. 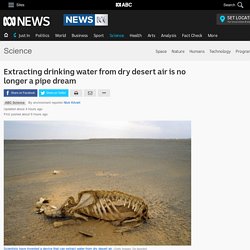 Your car has broken down, and there's no sign of another person for miles. A survival expert will tell you your first priority is finding water. It's probably not a situation many of us will ever face, but for some people and in certain regions of the world, reliable access to clean drinking water can be a constant struggle, and droughts can be deadly. So being able to effectively conjure water from thin air, as fanciful as that sounds, could dramatically change people's lives.

Earlier this year, a team of researchers from the University of California Berkeley reported they had created a device that can extract water from dry desert air, without using an external fuel source. Immersive Virtual Experiences for Any Property - Matterport. Malnutrition in children: Why the first 1000 days of a baby’s life is critical. News.com.au and World Vision explore the East Africa crisis. 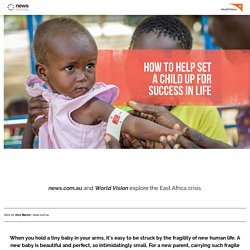 World Vision is working to save lives and create long-term change in communities affected by hunger in East Africa. 500 East African children need sponsors by 30 September. Act now. How artificial intelligence is changing personal finance. There seems to be an app for everything these days, except for one that can make you a millionaire. 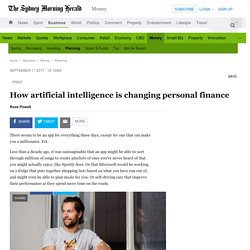 Yet. Less than a decade ago, it was unimaginable that an app might be able to sort through millions of songs to create playlists of ones you've never heard of that you might actually enjoy, like Spotify does. Or that Microsoft would be working on a fridge that puts together shopping lists based on what you have run out of, and might even be able to plan meals for you. Or self-driving cars that improve their performance as they spend more time on the roads. Recycling companies stockpiling thousands of tonnes of glass as cheap imports leave market in crisis. Updated. 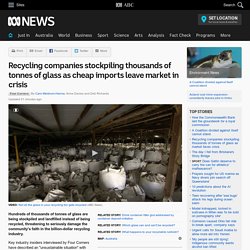 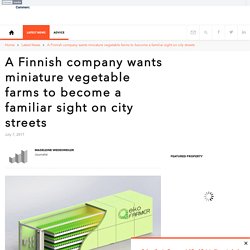 Shipping containers are a popular and affordable building material, and now Exsilio Oy believes they are the perfect vessel for ‘the EkoFARMER’. The EkoFARMER is a 13-metre long shipping container that can be set up where there is a water and electrical supply. With one glass side and a partly glass roof, as well as temperature controls, it functions as a greenhouse, though Exsilio says it could produce a crop yield three times larger than a traditional greenhouse. It would allow city workers to grow their own produce, as ‘urban farming’ becomes an increasingly popular phenomenon. The other credit risk to watch in China: Fintech-fuelled debt. China's government has copped what Scott Morrison is so desperate to avoid: a credit rating downgrade. 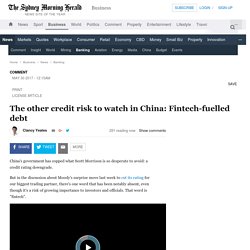 But in the discussion about Moody's surprise move last week to cut its rating for our biggest trading partner, there's one word that has been notably absent, even though it's a risk of growing importance to investors and officials. That word is "fintech". This is a modal window. This modal can be closed by pressing the Escape key or activating the close button. Caption Settings Dialog Beginning of dialog window.

Seven disruptive technologies to watch out for in 2017. Women Entrepreneurs Have A New BFF And She Is Always There For You. The latest tech set to change apartment living. Thanks to a rapidly emerging design trend incorporating a plethora of advanced lifestyle technologies, the once humble unit or townhouse can now offer an experience that channels science fiction rather than urban norm. 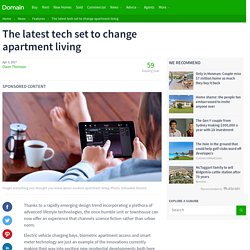 Electric vehicle charging bays, biometric apartment access and smart meter technology are just an example of the innovations currently making their way into exciting new residential developments both here and abroad. Notable for their emphasis on enabling sustainable lifestyles, such inclusions allow residents to control living costs and reduce their carbon footprints. Then there’s the simple, inescapable fun of living in a responsive and interactive space. Reebok is making sneakers out of corn. Be more…biodegradable. In an effort to create more sustainable products, Reebok is going to start making sneakers out of corn. The sole of the sneaker will be made with petroleum-free, non-toxic industrial-grown corn, while the body of the shoe will be made with 100 percent organic cotton. The line is part of the company’s Corn + Cotton initiative. “Reebok is trying to clean up the entire life cycle of shoe making,” Bill McInnis, vice president of Reebok’s future team, said in a statement.

Mosquitos: There should have been a plague this summer but where have that all gone? A mosquito killer robot was displayed at the China Hi-Tech Fair (CHTF), which launched in Shenzhen, on Wednesday. The robot is produced by Shenzhen Robotics Association. According to their marketing manager Jack Shaw, the robot can "detect a mosquito stretch and catch it, and then finish it off using laser technology.

The device is intended to be used in Africa and south Asia. Liverpool is the top suburb for online shopping in NSW. NSW is the fastest-growing state for online shopping, but there is one suburb heading to the online checkout the most: Liverpool. Thirty-two kilometres south-west of the CBD and home to more than 140 languages, Liverpool and its population of more than 24,000 makes the most online shopping purchases in NSW. This is a modal window.

This modal can be closed by pressing the Escape key or activating the close button. Our amazing year in health technology. Our amazing year in health technology Our amazing year in health technology Story by ALICE WILLIAMS | news.com.au IT'S a pretty a commonly accepted idea that technology is making us all lazier by delivering the world right to our greedy, ever plumper, fingers. But the truth is that now more than ever, modern technology is actually creating new ways to inspire us to lead healthier lifestyles and take better care of our bods. Future of Sydney’s Retail and Online Shopping. Online shopping won’t kill off the high-street store. But it is changing customer expectations, and physical shops will have to adapt their retail experience. The first thing that hits you is the smell. And that’s the point. The small Mon Purse boutique on William St, Paddington, is the future of retail.

The only thing missing is drones. This gleaming white room is where a booming online sales business in bespoke leather accessories comes face-to-face with customers who want to see, handle and smell the goods. Welcome. South East Asia internet economy to grow. Australian investors are ‘living on a different planet’

The sale of Clint’s Crazy Bargains’ 115 stores to New Zealand company The Warehouse in 2000 marked the beginning of a series of high-profile collapses of Australian discount retailers. The coolest kitchen products on the planet. Tesla Suit means that one day you'll be able to hug your partner remotely. Taste test: Are Jack's Newtown burgers Sydney's best? Gaming is about to change forever. This is why. This is what we should do to foster start-ups in Australia. Evocca College, Unique International College, Phoenix Institute slapped by Australian Skills Quality Authority. This is the future of schools. How Digital Disruptors Could Transform Trade Finance. From making scarves to building a $165 million tech start-up: Canva's Melanie Perkins. Skip, Companion, Water Balance: Why the app store is destroying humanity. Opening a window on Australia's job opportunities in the face of massive changes.

Possible cancer cure being tested in human medical trials in Sydney, Melbourne. IiNet: New world of devices. Australians play video games for 1.5 hours a day: survey. The high cost of Australia’s housing obsession. Queen of Silicon Valley Sandra Kurtzig on success of ASK Computers. YouTube star Natalie Tran is a prolific apologiser. The microwave is on the verge of its biggest update in 50 years. Taylor Swift and Fleetwood Mac lead the blockbuster concert box office in Australia for 2015.

Facial recognition software is expected to link your MasterCard account to the image of your face. The seven global megatrends that could change our future. Action on fixing the Great Barrier Reef is “urgent” Chip implants beneath the skin bring a new meaning to 'pay wave' Clinica-Lase, Melbourne. $10 hedge fund supercomputer sweeps Wall Street with power from the cloud. L'Oreal is 3D printing its own human skin to test cosmetics. Upscale stores try ‘smart’ mirrors to help customers shop.

Forbes.com writer Jason Lim launches Asia Recon, an initiative exposing Aussies to hidden opportunities across Asia - Startup Daily. Business Diploma gold rush: Private colleges sign 10,000 students up to $90m worth of loans. Sydney start-up launches The Realm System to bring ‘force’ to video games and virtual reality. Who we are as Australians in 2015. Gyde this: Aussie brothers Andrew and Scott Julian aiming for the Google of streaming video.

Superior Singing Doodle Video – Clickbank – With Video Description Box — Superior Singing Method. Why Millennials Don't Want To Buy Stuff. Why 3D printers are 'the sewing machine for the 21st century' She’s just not that into you: China’s bachelors in crisis thanks to shortage of women. Microsoft unveils HoloLens, gives Windows 10 away for free. Australian YouTube stars are million dollar hot property complete with agents. Whether we like it or not, porn rules our lives and has changed the way we live. This is how. How Lego became the world’s biggest toy company. Smart gadgets power ahead at the Consumer Electronics Show. The year in technology, and what to expect in 2015. You won’t believe what your mobile will do in the future. 3D printing’s journey from science fiction to science fact.