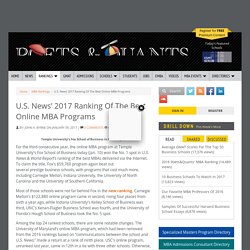 News & World Report‘s ranking of the best MBAs delivered via the Internet. To claim the title, Fox’s $59,760 program again beat out several prestige business schools, with programs that cost much more, including Carnegie Mellon, Indiana University, the University of North Carolina and the University of Southern California. Most of those schools were not far behind Fox in the new ranking. Carnegie Mellon’s $122,880 online program came in second, rising four places from sixth a year ago, while Indiana University’s Kelley School of Business was third, UNC’s Kenan-Flagler Business School was fourth, and the University of Florida’s Hough School of Business took the No. 5 spot. Among the top 24 ranked schools, there are some notable changes. 30 Recommended Apps For Online Students. It just plain makes sense that students who dig incorporating technology into their academic pursuits would likely make mobile computing via tablets and smartphones an integral life component.

Taking advantage of everything these applications have to offer streamlines the largely autonomous process behind enrolling in an online course. 30 Useful Apps For Students You Probably Don't Know About. 10 Business Books Every Entrepreneur Should Read in 2017. Bill Gates recently released his favorite books of 2016. 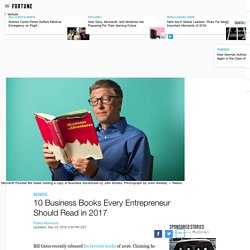 Rugby World Cup final: ‘Just bend the back and get on with it’ - Wallaby captain Stephen Moore’s approach. The 30-day trick to make billions. Jay Samit, CEO of SeaChange International and author of the new book Disrupt Yourself, says there have never been more opportunities to make money — if you know where to look. 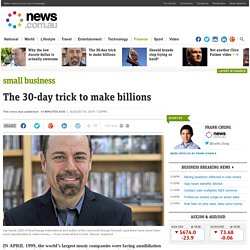 Source: Supplied IN APRIL 1999, the world’s largest music companies were facing annihilation from the spread of peer-to-peer downloading services such as Napster. Jay Samit, an internet pioneer and digital media executive, had just jumped ship from Universal to rival EMI Music. The now-defunct British music giant needed an “intrepreneur” — someone to create an entirely new business division within the company to tackle this thing called the internet. “I told them, ‘I’m not a music guy’,” Mr Samit told news.com.au. The Innovator's Toolkit. Useful Governance Documentation Templates - Effective Governance.

Video Lectures and Slides. Template for Preparing a Management Report to the Board. Tuition provider resources. Video resources The content of these interviews has been prepared by the examining team and have been developed to support your teaching and to share in class. 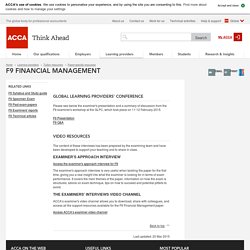 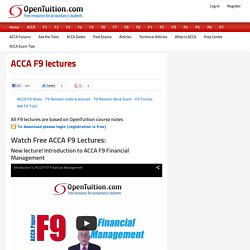 Unfortunately, due to crippling economic circumstances in my country I could no longer afford to take classes or buy online Lectures. The right university degree to study to make a fortune? Engineering. The rise of soft skills: Why top marks no longer get the best jobs. Business Innovation and Investment (Provisional) visa (subclass 188) Your obligations You need to provide valuable input into the Australian economy. 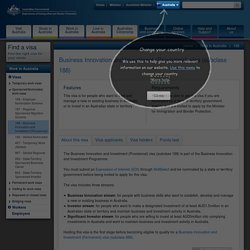 ACCA Past Exams: Download ACCA Questions and Answers. For me Opentuition has been an excellent resource. 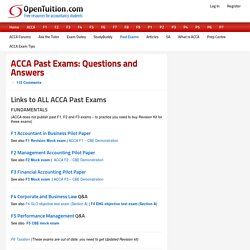 Unfortunately, due to crippling economic circumstances in my country I could no longer afford to take classes or buy online Lectures. But Opentuition gave me the same knowledge and a similar experience than to what I would have experience in a class room. All of Opentuition lecturers are amazing, the level of explanation and clarity is simply excellent, in fact I have seen the same level of quality given by very few lecturers in colleges here. It IS the best study resource on the internet. Australia is heading towards a $1 trillion deficit cliff. Barnaby Joyce has warned the country will go broke if Australia's financial position isn't turned around. 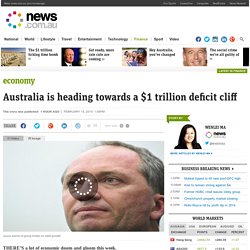 More videos available at the News video hub At least one person has been killed and six injured in separate shootings in the Danish capital. Numbers game: How prices get shoppers 'feeling right' about a deal. Motley Fool Australia » The Motley Fool’s Top Dividend Stock for 2015. Dividends can be an investor's best friend. 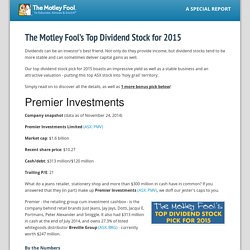 Not only do they provide income, but dividend stocks tend to be more stable and can sometimes deliver capital gains as well. Our top dividend stock pick for 2015 boasts an impressive yield as well as a stable business and an attractive valuation - putting this top ASX stock into 'holy grail' territory. Simply read on to discover all the details, as well as 1 more bonus pick below! Company snapshot (data as of November 24, 2014) Premier Investments Limited (ASX: PMV) Market cap: $1.6 billion Recent share price: $10.27 Cash/debt: $313 million/$120 million Trailing P/E: 21.

Earnings Per Share (EPS) Definition. Outstanding shares refer to a company's stock currently held by all its shareholders, including share blocks held by institutional investors and restricted shares owned by the company’s officers and insiders. 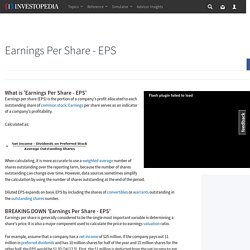 Outstanding shares are shown on a company’s balance sheet under the heading “Capital Stock.” The number of outstanding shares is used in calculating key metrics such as a company’s market capitalization, as well as its earnings per share (EPS) and cash flow per share (CFPS). ROA And ROE Give Clear Picture Of Corporate Health. Current Ratio Definition. DEFINITION of 'Current Ratio' A liquidity ratio that measures a company's ability to pay short-term obligations. The Current Ratio formula is: Also known as "liquidity ratio", "cash asset ratio" and "cash ratio". ROA And ROE Give Clear Picture Of Corporate Health. China's Xiaomi: the rise of a new smartphone giant. A customer examines a product of Xiaomi, which is now China’s No. 1 maker of smartphones, in Beijing. Photo: Gilles Sabrie / The New York Times In China, the smartphone battle used to be Samsung versus Apple. But not anymore. Over the summer, a Chinese company, Xiaomi, took the No. 1 position in China's competitive market and became the world's third-largest phone-maker in the process.

Founded in 2010 as a lean startup to sell smartly designed phones at cheap prices over the internet, Xiaomi was decidedly late to the game. Mainstream and 16 to 19 free school financial template. Corporate Governance Tools. News.com.au Cost of Living Survey shows Australians struggle with rising prices no matter what your income. Channel Nine Finance Expert Ross Greenwood discusses where Aussies are trying to save money these days. Cost of living: What Australians really spend their money on.

Rent and paying a mortgage are among the biggest expenses for Gen X and Gen Y. Source: News Limited EVER wonder where all your money goes? Leaving the chair: generational change under way for boards. Women stall on reaching corporate Australia's highest rungs.