The Contribution of Neanderthals to Phenotypic Variation in Modern Humans: The American Journal of Human Genetics 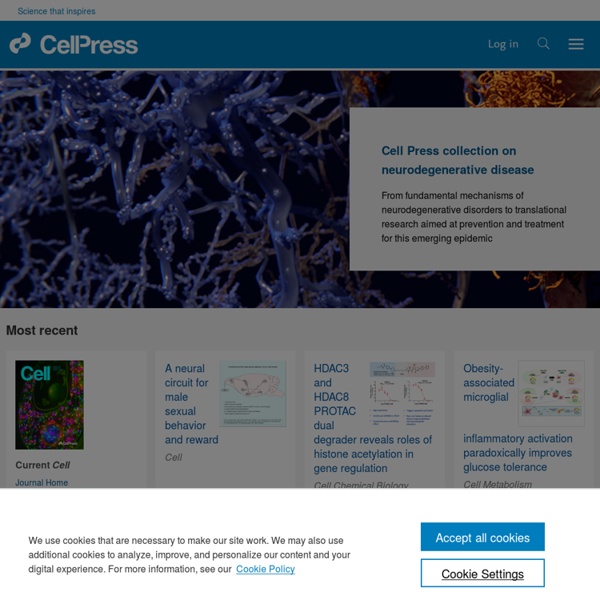 Cell Press celebrates the achievements of James E. Rothman, Randy W. Schekman, and Neuron Editorial Board member Thomas C. Südhof, recipients of the 2013 Nobel Prize in Physiology or Medicine and congratulates Structure Editorial Board member Martin Karplus, Biophysical Journal Editorial Board member Michael Levitt, and Arieh Warshel , the recipients of the 2013 Nobel Prize in Chemistry. Read the award winners' research published in Cell Press journals FREE. Best of 2013: The conclusion of 2013 marks the third year of the Cell Picture Show and its mission of presenting the most compelling imagery in microscopy, bioscience data, and scientifically based art.

Journal home : Nature Raphael Lis, Charles C. Karrasch, Michael G. Poulos, Balvir Kunar, David Redmond, Jose G. Barcia Duran, Chaitanya R. Badwe, William Schachterle, Michael Ginsberg, Jenny Xiang, Arash Rafii Tabrizi, Koji Shido, Zev Rosenwaks, Olivier Elemento, Nancy A. Speck, Jason M. Neanderthals vs. Homo sapiens: Inside the 100,000-year-long battle for supremacy Around 600,000 years ago, humanity split in two. One group stayed in Africa, evolving into us. The other struck out overland, into Asia, then Europe, becoming Homo neanderthalensis – the Neanderthals. They weren’t our ancestors, but a sister species, evolving in parallel. Neanderthals fascinate us because of what they tell us about ourselves – who we were, and who we might have become.

Thrombospondin 1 Thrombospondin 1, abbreviated as THBS1, is a protein that in humans is encoded by the THBS1 gene.[5][6] Thrombospondin 1 is a subunit of a disulfide-linked homotrimeric protein. This protein is an adhesive glycoprotein that mediates cell-to-cell and cell-to-matrix interactions. This protein can bind to fibrinogen, fibronectin, laminin, type V collagen and integrins alpha-V/beta-1. This protein has been shown to play roles in platelet aggregation, angiogenesis, and tumorigenesis.[7] Function[edit] Past 5,000 years prolific for changes to human genome Chris Dascher / Getty Images Humans are carrying around more harmful mutations in the last 5,000 years. The human genome has been busy over the past 5,000 years. Human populations have grown exponentially, and new genetic mutations arise with each generation.

Herbarium specimens show patterns of fruiting phenology in native and invasive plant species across New England - Gallinat - 2018 - American Journal of Botany Premise of the Study Patterns of fruiting phenology in temperate ecosystems are poorly understood, despite the ecological importance of fruiting for animal nutrition and seed dispersal. Herbarium specimens represent an under-utilized resource for investigating geographical and climatic factors affecting fruiting times within species, patterns in fruiting times among species, and differences between native and non-native invasive species. Methods

Neanderthal DNA discovery solves a human history mystery For what felt like forever, evolutionary researchers were frustrated: They simply could not find the Neanderthal Y chromosome — there were just no good samples to be found. The Y chromosome is only possessed by males, passed exclusively from father to son. The issue was the lack of robust DNA from Neanderthal men, which had been preserved badly in comparison to the females’. UNC-5 Discovery of netrins[edit] The term netrin was first used in a study done in 1990 in Caenorhabditis elegans and was called UNC-6.[2] Studies performed on rodents in 1994 have determined that netrins are vital to guidance cues. The vertebrate orthologue of UNC-6, netrin-1 was determined to be a key guidance cue for axons moving toward the ventral midline in the rodent embryo spinal cord.

Mendel-GPU: haplotyping and genotype imputation on graphics processing units + Author Affiliations ↵*To whom correspondence should be addressed Received June 2, 2012. Revision received August 6, 2012. Accepted August 24, 2012. Digitization protocol for scoring reproductive phenology from herbarium specimens of seed plants - Yost - 2018 - Applications in Plant Sciences Premise of the Study Herbarium specimens provide a robust record of historical plant phenology (the timing of seasonal events such as flowering or fruiting). However, the difficulty of aggregating phenological data from specimens arises from a lack of standardized scoring methods and definitions for phenological states across the collections community. Methods and Results To address this problem, we report on a consensus reached by an iDigBio working group of curators, researchers, and data standards experts regarding an efficient scoring protocol and a data-sharing protocol for reproductive traits available from herbarium specimens of seed plants. The phenological data sets generated can be shared via Darwin Core Archives using the Extended MeasurementOrFact extension.