Data Damage Animated Typeface. This software ("the Software Product") and accompanying documentation is licensed and not sold. 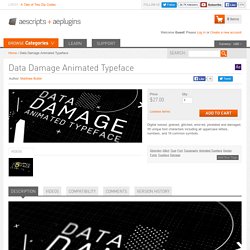 This Software Product is protected by copyright laws and treaties, as well as laws and treaties related to other forms of intellectual property. The author owns intellectual property rights in the Software Product. The Licensee's ("you" or "your") license to download, use, copy, or change the Software Product is subject to these rights and to all the terms and conditions of this End User License Agreement ("Agreement"). Acceptance YOU ACCEPT AND AGREE TO BE BOUND BY THE TERMS OF THIS AGREEMENT BY SELECTING THE "ACCEPT" OPTION AND DOWNLOADING THE SOFTWARE PRODUCT OR BY INSTALLING, USING, OR COPYING THE SOFTWARE PRODUCT.

YOU MUST AGREE TO ALL OF THE TERMS OF THIS AGREEMENT BEFORE YOU WILL BE ALLOWED TO DOWNLOAD THE SOFTWARE PRODUCT. License Grant This Agreement entitles you to install and use one copy of the Software Product. Using Particular & Mosaic Effect in After Effects to Reveal Raining Letters. Although there have been tons and tons of tutorials dealing with creating the Matrix Raining Code Effect, Maltaannon takes a bit of a different approach here, a much better one actually by using particular and After Effects’ Mosaic effect to reveal the leading letters… also Maltaannon Jerzy Drozda returns with a tutorial! 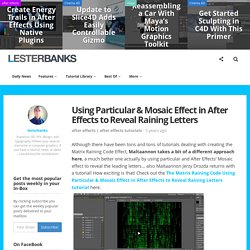 How exciting is that! Check out the The Matrix Raining Code Using Particular & Mosaic Effect in After Effects to Reveal Raining Letters tutorial here. Maltaannon notes on his post: “I figured to change the approach a bit, and instead of having a “leading letter particle” spawn “after vision particles”, I decided to build a grid of letters, and then use Particular and Mosaic effect to reveal them.

That way I could focus on the look, speed, timing and other “artistic” aspects of the work, and not think about how to set up Particular.” The Matrix text effect in After Effects by Rich Young - ProVideo Coalition. There are a number of ways to generate the Matrix text effect, and reflex dictates a list. 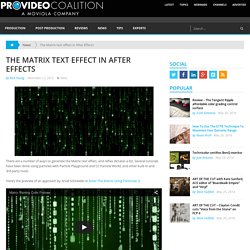 Several tutorials have been done using particles with Particle Playground and CC Particle World, and other built-in and 3rd-party tools. Here’s the preview of an approach by Arvid Schneider in Enter The Matrix Using Particular 2: Here’s some other approaches: Maltaannon posted The Matrix Raining Code, which has a video tutorial, observations, and a free AE project file (pictured top).The Matrix project and text tutorial by Richard Lainhart (RIP), co-founder of a previous incarnation of AENY. This granddaddy is so old that it can’t be opened by CS5, though a version in one of the Meyer books might work. Later, Boris FX added their method for their plug-ins in Boris TV, Episode 191: “The Matrix” Effect. THE MATRIX (MACHINE) CODE IN AFTEREFFECTS – TUTORIAL/САМОУЧИТЕЛЬ by Crawlerz – Russian Tactical seems like it should work: Rich Young. Matrix Code.aep. Matrix Code.aep Iniciar sesión Caps lock is currently onInicio de sesión único habilitadoo Inicia sesión con credenciales de Dropbox Regístrate en Dropbox. 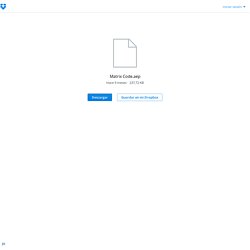 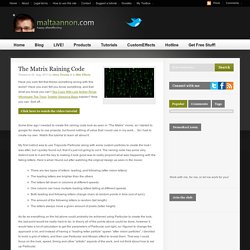 Aug, 2011 by Jerzy Drozda Jr in After Effects Have you ever felt that theres something wrong with this world? Have you ever felt you know something, and that what you know you can’t Tea Cups With Lids Amber Rings Wholesale Tea Trays Toddler Sleeping Bags explain? Now you can. Sort off… Click here to watch the video tutorial Some time ago I needed to create the raining code look as seen in “The Matrix” movie, so I started to google for ready to use projects, but found nothing of value that I could use in my work… So I had to create my own.