Routine DNA tests will put NHS at the 'forefront of medicine' People in England will have access to DNA tests on an unprecedented scale from the autumn when the NHS becomes the first health service in the world to routinely offer genomic medicine. 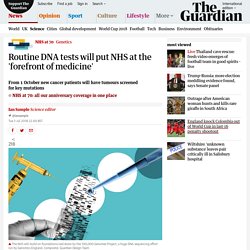 From 1 October, hospitals across England will be connected to specialist centres that read, analyse and interpret patient DNA to help diagnose rare diseases, match patients to the most effective treatments, and reduce adverse drug reactions. The move marks a big step towards “precision medicine”, which offers more efficient therapies that are tailored to individual patients. Under the service, new cancer patients will routinely have their tumour DNA screened for key mutations that can point doctors towards the best drug to use in treatment, or to clinical trials of experimental therapies that patients are likely to benefit from. 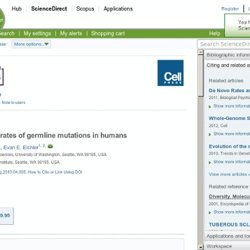 Cell. My DNA Results Spur Alzheimer’s Anxiety at $12,000 Cost. Rare Mutation Triples Risk of Alzheimer's. A mutation found in about one in 200 Icelanders older than 85 raised the risk of developing Alzheimer's disease threefold, researchers said. 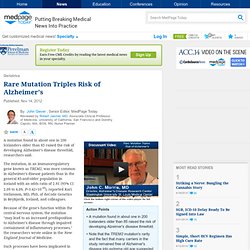 The mutation, in an immunoregulatory gene known as TREM2, was more common in Alzheimer's disease patients than in the general 85-and-older population in Iceland with an odds ratio of 2.91 (95% CI 2.09 to 4.09, P=3.42×10-10), reported Kari Stefansson, MD, PhD, of deCode Genetics in Reykjavik, Iceland, and colleagues. Because of the gene's function within the central nervous system, the mutation "may lead to an increased predisposition to Alzheimer's disease through impaired containment of inflammatory processes," the researchers wrote online in the New England Journal of Medicine. Scientists identify new risk gene for Alzheimer's. Mendel-GPU: haplotyping and genotype imputation on graphics processing units.

+ Author Affiliations ↵*To whom correspondence should be addressed Received June 2, 2012. 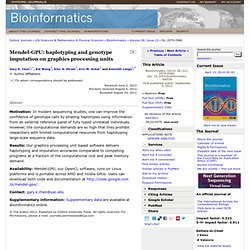 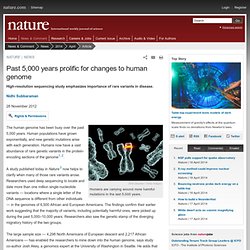 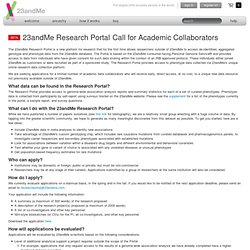 The Portal is based on the 23andMe consumer-facing Personal Genome Service® and provides access to data from individuals who have given consent for such data sharing within the context of an IRB-approved protocol. These individuals either joined 23andMe as customers or were recruited as part of a sponsored study. The Research Portal provides access to phenotype data collected via 23andMe's unique online research data collection platform. We are seeking applications for a limited number of academic beta collaborators who will receive early, direct access, at no cost, to a unique new data resource not previously available outside of 23andMe. 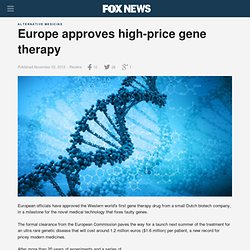 The formal clearance from the European Commission paves the way for a launch next summer of the treatment for an ultra rare genetic disease that will cost around 1.2 million euros ($1.6 million) per patient, a new record for pricey modern medicines. After more than 20 years of experiments and a series of disappointments, the EU approval of Glybera, which treats the genetic disorder lipoprotein lipase deficiency (LPLD), is a significant boost for the gene therapy field. Joern Aldag, chief executive of Amsterdam-based uniQure, said more such treatments would follow and argued a high price was justified because gene therapy restored natural body function and did not just offer a short-term fix. The approval follows a positive recommendation from the European Medicines Agency in July. Phylotastic. News/Phylotastic Hackathon. 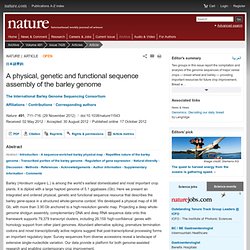 Genomic sequencing. Genomics: The single life. Visuals Unlimited/Corbis All Nicholas Navin needed was one cell — the issue was how to get it. 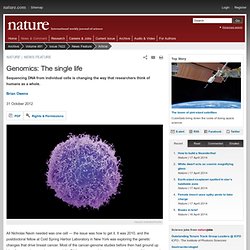 It was 2010, and the postdoctoral fellow at Cold Spring Harbor Laboratory in New York was exploring the genetic changes that drive breast cancer. Most of the cancer-genome studies before then had ground up bits of tumour tissue and sequenced the DNA en masse, giving a consensus picture of the cancer’s genome. Life-Saving DNA Test Overlooked in Rise of Colon Cancer.

Genetic testing is becoming cheaper and more widespread, promising to usher in a revolution in cancer treatment. 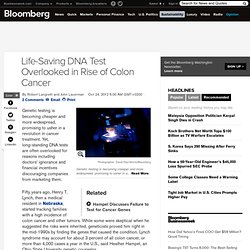 Yet, long-standing DNA tests are often overlooked for reasons including doctors’ ignorance and financial incentives discouraging companies from marketing them. Fifty years ago, Henry T. Lynch, then a medical resident in Nebraska, started tracking families with a high incidence of colon cancer and other tumors. While some were skeptical when he suggested the risks were inherited, geneticists proved him right in the mid-1990s by finding the genes that caused the condition. Lynch syndrome may account for about 3 percent of all colon cancer, or more than 4,000 cases a year in the U.S., said Heather Hampel, an Ohio State University genetic counselor.