The Reptilian Aliens and the Council of the 13 'Royal' Families 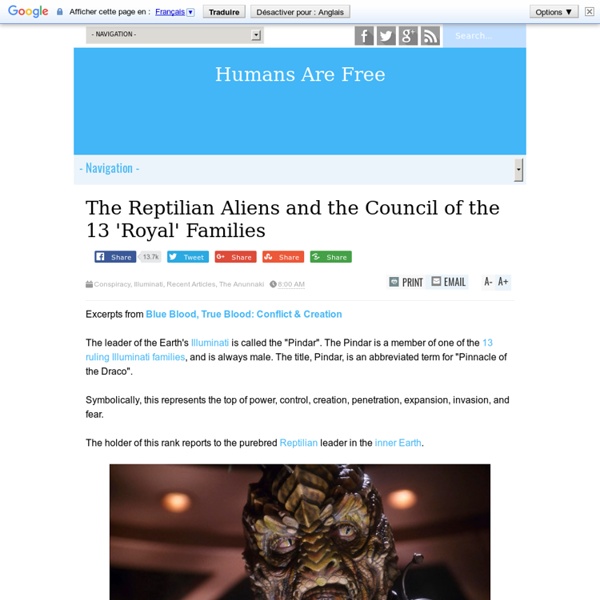 Related:  the ET • You Should Know This

John E. Mack Institute 16 Apr 2008 Stephen Coan, The Witness American film maker Randall Nickerson is currently visiting southern Africa to make a documentary that follows up an incident that happened at the Ariel School in Ruwa, Zimbabwe, in 1994, when 62 children aged between eight and 12 reported seeing a UFO and “strange beings” during their morning break. Those children are now young adults scattered around the globe. Nickerson is tracking them down and interviewing them about the experience. “Their stories have not changed at all,” he says. “Not what you would expect if they had made it all up.”

Google Implements “Right to be Forgotten” and Begins Censoring History The so-called “right to be forgotten” is nothing more than a method of deleting unfavorable incidents from one’s past. Google has approved roughly 100,000 requests and deleted the offending entries from search results. That is 100,000 pieces of history that will no longer show up in search results. In today’s digital world, the censors don’t have to burn books. They just remove the people’s method of finding them. Google’s actions amount to a digital book burning. Other Solar Systems - Zoom Astronomy Recently, many other stars with orbiting planets have been discovered. These planets (called exoplanets) have not yet been directly seen by us, but they have been detected by the very slight "wobble" they induce in their star. Stars with orbiting planets "wobble" slightly as their planets gravitationally tug at them. By measuring the amount of "wobble" over time, astronomers can calculate how massive a planet (or planets) would have to be make that star "wobble" that much.

‘Mummified Alien’ Discovered In Russia Proves Extraterrestrial Life, UFO Conspiracy Theorists Say [Photos/Video] The alien and UFO conspiracy theory blogosphere is revisiting the famous case of the missing body of Alyoshenka (Aleshenka), also known as the Kyshtym Alien or Kyshtym Dwarf, a mysterious, diminutive humanoid corpse found in May 1996 in rural Kaolinovy, near Kyshtym in the Chelyabinsk Oblast, but which later went missing mysteriously. While conspiracy theorists claim that detailed expert autopsy reports, surviving photos, and videos (see below) give definitive proof that the alleged “alien body” was of extraterrestrial origins, skeptics insist that rumors of autopsy reports proving Alyoshenka was non-human were urban legend and that, on the contrary, reports from official sources proved the mummified corpse was a human female fetus born prematurely with severe deformities. But conspiracy theorists allege there were belated efforts by the Russian authorities to cover up the truth about the body. Police sent the alien corpse to local experts for study. [Image via Shutterstock]

9 Key Components of the Shift to Higher Consciousness This article originally appeared in WakingTimes.com. Facing considerable political, economic, social and ecological crises, the human race is desperate for a transformation and a new direction. Business as usual ensures that we are doomed to run a course of half-conscious self-destruction, as man-made catastrophes multiply and stress mounts in every aspect of life. We must overthrow our ignorance, as it has become a fearful master, goading us into war, pollution, waste and exploitation. The social problems and entrenched patterns at the source of global issues are too vast and complex to be solved at the personal level, yet, paradoxically, the personal transformation of the individual offers a lonesome opportunity to avert the catastrophes we are engineering for ourselves.

UFO Researchers: 82 Alien Species Are Currently In Contact With Earth — And At Least Four Are Fighting For Control Over Earth A three-part video (see below) purports to set aside the confusing New Age mumbo-jumbo in favor of the testimony of highly reliable whistleblower sources of information about the known extraterrestrial species visiting Earth. Information about alien species visiting Earth comes from a variety of sources. The first sources are alien abductees and contactees. The second sources are whistleblowers, including former military personnel, intelligence officials, and government scientists or employees. Although the public is often skeptical about the testimonies of alien abductees and contactees, members of the New Age movement and paranormal enthusiasts insist that their reliability has been demonstrated by scientific investigators such as neurologists, hypnotists, and psychologists.

About This page includes information about the aims and scope of BMC Bioinformatics, editorial policies, open access and article-processing charges, the peer review process and other information. For details of how to prepare and submit a manuscript through the online submission system, please see the instructions for authors. Scope BMC Bioinformatics is an open access, peer-reviewed journal that considers articles on all aspects of the development, testing and novel application of computational and statistical methods for the modeling and analysis of all kinds of biological data, as well as other areas of computational biology. BMC Bioinformatics is part of the BMC series which publishes subject-specific journals focused on the needs of individual research communities across all areas of biology and medicine. We offer an efficient, fair and friendly peer review service, and are committed to publishing all sound science, provided that there is some advance in knowledge presented by the work.

DRACONIANS Commentary from Dan Winter: The politics of the interventionist Draco trading colonies (see Dune - whose Arrakeis - the home star of Dracos and Dune - is correctly located in Alpha Draconis) - definitely became represented by Enlil / Yahweh / Michael side of the An - Annunaki family. Also should be seen as the roots of insurance and banking on Earth. The templar followers of the MAG (draco matriliny) line are often credited with 'inventing' insurance and banking for the west. This is absurd - since they had already installed such industry - so close to fear and extortion - to HARVEST COLONIES on hundreds of planets. The "skull and bones" - Orion- origins of the Piracy and Extortion story is an example of insurance and banking that loses its public relations budget. More on the skull of the Mag below.

First 3D Map of the Brain’s Connections We knew anatomy could be gorgeous, but this is beyond anything else we’ve ever seen, and it’s guaranteed to be something you haven’t seen, being the first 3D image of a brain’s connections. Van Wedeen, a Harvard radiology professor, is awestruck: “We’ve never really seen the brain – it’s been hiding in plain sight.” Conventional scanning has offered us a crude glimpse, but scientists such as Wedeen aim to produce the first ever three-dimensional map of all its neurons. They call this circuit diagram the “connectome”, and it could help us better understand everything from imagination and language to the miswirings that cause mental illness. The Greys extracted from Matrix II Since the primary species involved is that of the Greys, we will concentrate on that species. Over the last several years , researchers have unearthed plenty of evidence that: The United States made one or more agreements with a species described as the tall Greys, and has agreed not to interfere with alien operational plans in trade for technology.

Who is the Court of Protection really protecting? Posted by Ellee on Oct 25, 2009 in Alzheimer's, News | 41 comments They say you judge a nation by the way it looks after its elderly and vulnerable population. So who can defend this very disturbing report in today’s Mail on Sunday which claims that the Court of Protection is seizing the assets of thousands of elderly and mentally impaired people and turning control of their lives over to the State – against the wishes of their relatives. The Court of Protection was set up two years ago to act in the interests of people suffering from Alzheimer’s or other mental incapacity.