Why Your Brain Loves Good Storytelling. It is quiet and dark. 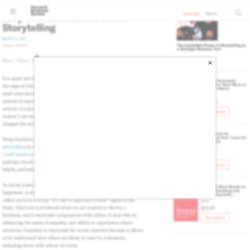 The theater is hushed. James Bond skirts along the edge of a building as his enemy takes aim. Here in the audience, heart rates increase and palms sweat. I know this to be true because instead of enjoying the movie myself, I am measuring the brain activity of a dozen viewers. For me, excitement has a different source: I am watching an amazing neural ballet in which a story line changes the activity of people’s brains. If a novel was good, would you care if it was created by artificial intelligence? Roland Barthes was speaking metaphorically when he suggested in 1967 that “the birth of the reader must be ransomed by the death of the author”. 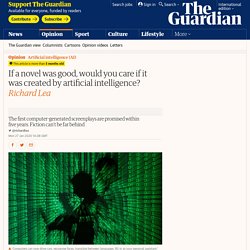 But as artificial intelligence takes its first steps in fiction writing, it seems technology may one day start to make Barthes’ metaphor all too real. AI is still some way off writing a coherent novel, as surreal experiments with Harry Potter show, but the future isn’t so far away in Hollywood. According to Nadira Azermai, whose company ScriptBook is developing a screenwriting AI: “Within five years we’ll have scripts written by AI that you would think are better than human writing.”

The Multigraph – Interacting with Print. A thorough rethinking of a field deserves to take a shape that is in itself new. 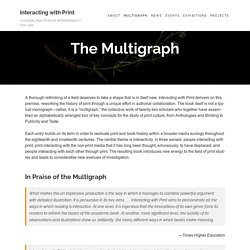 Interacting with Print delivers on this premise, reworking the history of print through a unique effort in authorial collaboration. The book itself is not a typical monograph—rather, it is a “multigraph,” the collective work of twenty-two scholars who together have assembled an alphabetically arranged tour of key concepts for the study of print culture, from Anthologies and Binding to Publicity and Taste. This strange, broken font is designed to help you remember what you read. Researchers at Melbourne's RMIT University have designed a font that is full of gaps and intentionally hard to read. 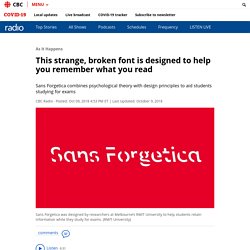 Sans Forgetica was specifically created to help students studying for exams by promoting memory retention while reading. A deeply needless book. Dwight Macdonald, "The Book-of-the-Millennium Club" Published in The New Yorker, November 29, 1952 FOR $249.50, which is (for all practical purposes) $250, one could buy, in 1952, a hundred pounds of Great Books: four hundred and forty-three works by seventy-six authors, ranging chronologically and in other ways from Homer to Dr. 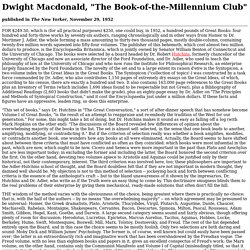 Mortimer J. Adler, the whole forming a mass amounting to thirty-two thousand pages, mostly double-column, containing twenty-five million words squeezed into fifty-four volumes. The publisher of this behemoth, which cost almost two million dollars to produce, is the Encyclopaedia Britannica, which is jointly owned by Senator William Benton of Connecticut and the University of Chicago. The books were selected by a board headed by Dr. "This set of books," says Dr. The Paris Review - Blog Archive The One Book Margaret Atwood Recommends to Every Writer. Outline - Read & annotate without distractions. A Reader's Manifesto. The head of his penis found the place it wanted. 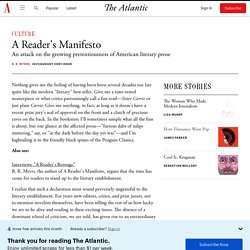 For a moment he waited there, poised, and kissed her—he took her lower lip between his lips and gently held it there. Then with his hands he pulled her to him and at the same time entered her so that she felt his scrotum slap against her skin. Her entire body felt the rightness of it, her entire body was seized to it. Hatsue arched her shoulder blades—her breasts pressed themselves against his chest—and a slow shudder ran through her. NEW! Office Lens for iOS now has the FULL Immersive Reader □ including syllables, parts of speech, line focus, picture dictionary & translate. Rolling out on your iPhone and iPad □ #edtech #accessibility #dyslexia #McrosoftEDU #Bett2020 □

Rose Marie Bentley lived for 99 years with organs in all the wrong places and never knew it. Similar groups of five gathered around bodies on the other 15 tables in the anatomy class, all eager to explore the mysteries of the human body they had seen only in textbooks. 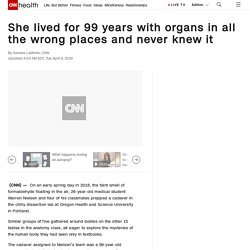 The cadaver assigned to Nielsen's team was a 99-year-old woman who had died of natural causes. Her name was Rose Marie Bentley, but the students didn't know that then. To honor and respect the privacy of those who offer their bodies to science, no further details are given medical students about the person who had once inhabited the body lying on the silvery slab before them.

But as the students and their professors were soon to find out, Bentley was special, so special she deserved her own unique spot in medical literature and history books. The reason? "I think the odds of finding another person like her may be as remote as one in 50 million," said assistant professor Cameron Walker, who teaches the Foundations of Clinical Anatomy class at Oregon Health and Science University. No horizon is so far : Liv Arnesen : Free Download, Borrow, and Streaming.