Doctors, Nurses and the Paperwork Crisis That Could Unite Them. This is why nurses and physicians must come together. 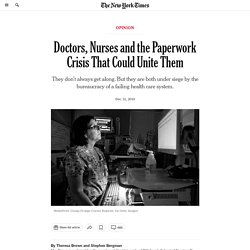 We must acknowledge the harm done by these ever-increasing documentation requirements, without losing the core benefits of electronic record keeping. One inspiration comes from a surprising place. Electronic health records are almost universally disliked, with one telling exception, those used by clinicians at the Department of Veterans Affairs. The reason: Billing concerns don’t shape the records at government-run V.A. hospitals. The Panama Papers Mapped. I'm sure that we are going to see a lot of interactive mapped visualizations of the data exposed by the Panama Papers over the next few months. 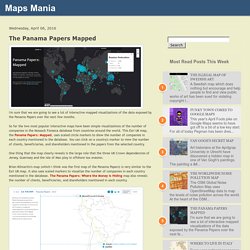 How Afraid of Watson the Robot Should We Be? Watson was just 4 years old when it beat the best human contestants on Jeopardy! 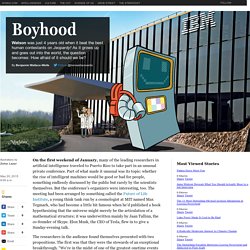 As it grows up and goes out into the world, the question becomes: How afraid of it should we be? Illustrations by Zohar Lazar On the first weekend of January, many of the leading researchers in artificial intelligence traveled to Puerto Rico to take part in an unusual private conference. Knowledge Doubling Every 12 Months, Soon to be Every 12 Hours. Knowledge Doubling Curve Buckminster Fuller created the “Knowledge Doubling Curve”; he noticed that until 1900 human knowledge doubled approximately every century. 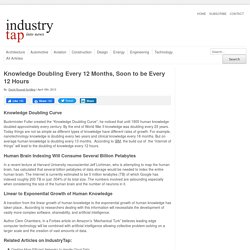 By the end of World War II knowledge was doubling every 25 years. The Law of Accelerating Returns. An analysis of the history of technology shows that technological change is exponential, contrary to the common-sense “intuitive linear” view. 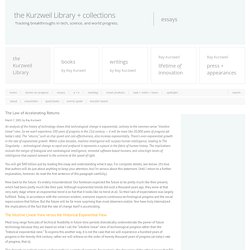 Litemind - Exploring ways to use our minds efficiently.

The impossibility of being an expert: empowering physicians with new-new information. The godfather of evidence-based medicine, Dr. 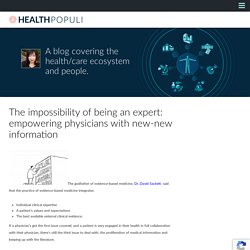 David Sackett, said that the practice of evidence-based medicine integrates: Individual clinical expertiseA patient’s values and expectationsThe best available external clinical evidence. If a physician’s got the first issue covered, and a patient is very engaged in their health in full collaboration with their physician, there’s still the third issue to deal with: the proliferation of medical information and keeping up with the literature.

There are 25,400 scientific journals and their number is increasing by 3.5% a year. More scientific and medical papers are being published now than ever before. 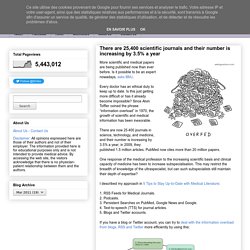 Is it possible to be an expert nowadays, asks BMJ. Every doctor has an ethical duty to keep up to date. Is this just getting more difficult or has it already become impossible? Since Alvin Toffler coined the phrase “information overload” in 1970, the growth of scientific and medical information has been inexorable. There are now 25 400 journals in science, technology, and medicine, and their number is increasing by 3.5% a year; in 2009, they published 1.5 million articles. One response of the medical profession to the increasing scientific basis and clinical capacity of medicine has been to increase subspecialisation. The impossibility of being an expert: empowering physicians with new-new information. Key Findings from U.S. Digital Marketing Spending Survey, 2013. Marketing leaders have secured bigger budgets to define markets and attract, acquire and retain customers. 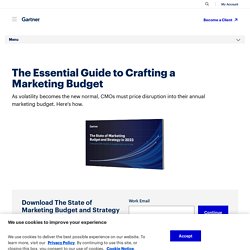 Yet, increased funding is a double-edged sword. It brings new opportunities but puts more pressure on marketers to deliver and prove a return on the investments. Use our seven key findings to benchmark your marketing budgets and review our recommendations to enhance your digital marketing efforts. World Internet Users Statistics Usage and World Population Stats. 20th WCP: What Is Information? In the books and papers on brain science, cognitive science, etc., one of the most frequently used terms is information. 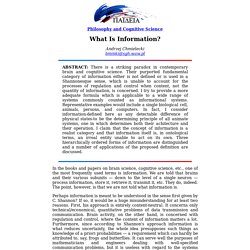 We are told that brains and their various subunits — down to the level of a single neuron — process information, store it, retrieve it, transmit it, etc. They do, indeed. The point, however, is that we are not told what information is. Perhaps information is meant to be understood in the sense first given by C. Shannon? I suppose that what is taken for granted here is a commonsense, mentalistic connotation: information is thought to be a piece of knowledge. Public Speaking: For the average person speaking at a normal pace, what is the typical number of words they can say in one minute. Was Eric Schmidt Wrong About the Historical Scale of the Internet?

Last August we quoted outgoing Google CEO Eric Schmidt saying "There was 5 exabytes of information created between the dawn of civilization through 2003, but that much information is now created every 2 days, and the pace is increasing. 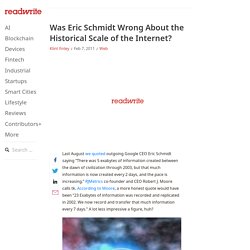 " RJMetrics co-founder and CEO Robert J. Moore calls tk. According to Moore, a more honest quote would have been "23 Exabytes of information was recorded and replicated in 2002. We now record and transfer that much information every 7 days. " A lot less impressive a figure, huh? Executive Summary. How much new information is created each year? Newly created information is stored in four physical media print, film, magnetic and optical and seen or heard in four information flows through electronic channels telephone, radio and TV, and the Internet.

This study of information storage and flows analyzes the year 2002 in order to estimate the annual size of the stock of new information recorded in storage media, and heard or seen each year in information flows. Where reliable data was available we have compared the 2002 findings to those of our 2000 study (which used 1999 data) in order to describe a few trends in the growth rate of information.

Fungi.png (PNG Image, 800 × 600 pixels) - Scaled (96%) Reconstructing the tree of life. March 2008 Ernst Haeckel's Monophyletic tree of organisms, 1866. Biologists at the time identified three major groups of species: animals, plants and protista; primitive, mostly unicellular, organisms. Modern biologists also classify all life into three groups, but now animals and plants are considered to belong to the same group, with two different types of bacteria making up the other two groups. The Dawn of the Information Age. The Dawn of the Information Age When people picture the decade of social change, for most the “Flower Power” movement of the 1960s springs to mind.

But few stop to consider the massive cultural revolution that is occurring right in front of their eyes. The advent of the internet is fundamentally changing the way that society functions by empowering the individual. This phenomenon is known as the Information Age and promises to have far-reaching effects in the years to come. Can modern society learn to adapt in order to benefit from this new emerging power-structure? History of Psychology. Dawn of the Information Age. World War II created a need for more advanced information processing systems for war technology (e.g. radar and sonar) which led to the development of electronic computers.

Computers are unique in that they neither generate power nor manufacture a tangible product, they simply process information. Understanding the computer required the development of new ways to model the flow and transformation of information. These models were to have a strong influence on cognitive psychology (see 'Human Information Processing' in this history). In a related development, the war led to advances in goal-directed/self-regulating systems (e.g. guided missiles, which must regulate their behavior to stay on course to their target) A new branch of mathematics, named 'cybernetics' was developed to model the behavior of these goal-directed/self-regulating systems. Inventor of the Week: Archive. Vannevar Bush. History of the Hyperlink. Today we talked about many different kinds of interactive experiences—both digital and non-digital. In discussing the digital realm, we identified environmental, non-linear navigation, avatar-based games and community/collaborative interactive types.

As We May Think - Vannevar Bush. Liquid OS X. Five Best Mind Mapping Tools. Why I Use Mind Maps for Content Marketing Projects. I'm often asked how I manage all the details of complex content marketing projects. My favorite tool for this is Mind Maps. Specifically, I use MindJet. I whipped up a simple example to show you: If I was doing this for real, I'd have the persona where it says Content Map Example.

Will Humans Still Be Humans in an Age of Artificial Intelligence? - Megan Garber. Almost as soon as it arrived as a concept, artificial intelligence has occupied a hefty portion of humans' technological anxieties. We worry about machines taking over our jobs (and/or our emotions, and/or our lives). The Hut Where the Internet Began - Alexis C. Madrigal. Association for the Advancement of Artificial Intelligence. Challenge Based Learning - Browse Challenges. Online Instructional Associate. Semantic Web. I have an idea that I think is very important but I haven’t yet polished to the point where I’m comfortable sharing it.

I’m going to share it anyway, unpolished, because I think it’s that useful. Welcome to Glinkr. Idea: Clustering. 10 reasons why mind mapping software should be the foundation of your personal productivity system. Mind mapping software can significantly improve your effectiveness, so much so that you really ought to consider making it a key tool in your personal productivity arsenal. Here are 10 reasons why you should incorporate this technology into your workflow: