Our Sun's Mysterious 11-Year Cycle Appears to Be Driven by Alignment of The Planets. Chinese New Year 2020: The Year of the Rat. The Chinese New Year—also referred to as the Spring Festival and the Lunar New Year globally—will be celebrated on Saturday, February 12, 2021. 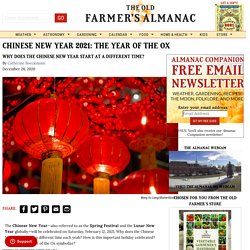 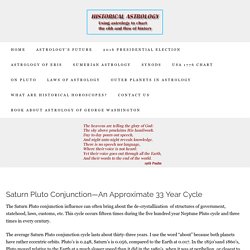 This cycle occurs fifteen times during the five hundred year Neptune Pluto cycle and three times in every century. The average Saturn Pluto conjunction cycle lasts about thirty-three years. I use the word “about” because both planets have rather eccentric orbits. Pluto’s is 0.248, Saturn’s is 0.056, compared to the Earth at 0.017. In the 1850’sand 1860’s, Pluto moved relative to the Earth at a much slower speed than it did in the 1980’s, when it was at perihelion, or closest to the Sun. The dynamic impact point of this cycle can last for about two months. When Saturn and Pluto travel together, their influence can often work so as to bring about the catabolic destruction of all structures of government, statehood, and styles and customs . These two planets are karmic in nature. Astronomy Answers: Calculate Synodical Periods. The sidereal period of a planet is the period in which the planet orbits once around the Sun, as seen from the Sun and measured relative to the stars. 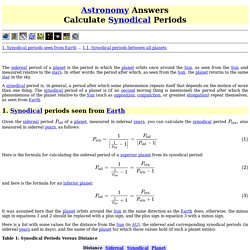 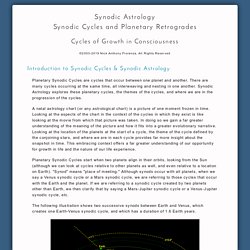 There are many cycles occurring at the same time, all interweaving and nesting in one another. Synodic Astrology explores these planetary cycles, the themes of the cycles, and where we are in the progression of the cycles. A natal astrology chart (or any astrological chart) is a picture of one moment frozen in time. Planetary Synodic Cycles start when two planets align in their orbits, looking from the Sun (although we can look at cycles relative to other planets as well, and even relative to a location on Earth).

The following illustration shows two successive synods between Earth and Venus, which creates one Earth-Venus synodic cycle, and which has a duration of 1.6 Earth years. See the Venus web page for more about Earth-Venus synods and their precessional pentagonal pattern. Note to astrologers: Planetary Synodic Cycles: A Major Part of History Astrology. Planetary synodic cycles, for good or for ill, exert a powerful force on history, introducing change and sometimes upheaval. 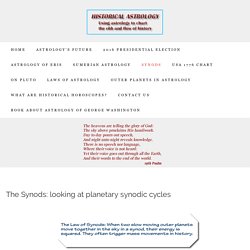 They can bring about new political structures or reform old ones, as happened in the UK Parliament from 1819 to 1834, under a Uranus Neptune synodic cycle. In a new planetary synodic cycle new types of cultural expression in art, literature, and music can take place. When two or more planets move together through the sky, they form an astronomical configuration called a synod (from the Greek, synodos, which means “a traveling together”). 5 Free Tools For Making Digital Portfolios. Students create a truly outstanding amount of work over the course of a year. 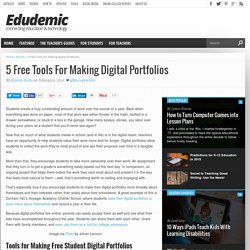 Back when everything was done on paper, most of that work was either thrown in the trash, stuffed in a drawer somewhere, or stuck in a box in the garage. How many essays, stories, you labor over during your years as a student that you’ll never see again? Now that so much of what students create in school (and in life) is in the digital realm, teachers have an opportunity to help students value their work more and for longer. Digital portfolios allow students to collect the work they’re most proud of and see their progress over time in a tangible way. More than that, they encourage students to take more ownership over their work. That’s especially true if you encourage students to make their digital portfolios more broadly about themselves and their interests rather than solely about their schoolwork. 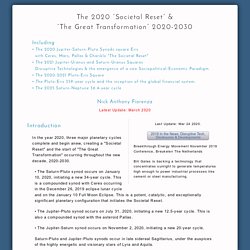 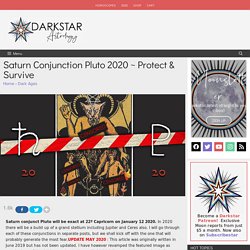 In 2020 there will be a build up of a grand stellium including Jupiter and Ceres also. I will go through each of these conjunctions in separate posts, but we shall kick off with the one that will probably generate the most fear.UPDATE MAY 2020 : This article was originally written in June 2019 but has not been updated. I have however revamped the featured image as google demon3ti$ed this post due to the nudity! I think it says all about the level of censorship right now. Very Saturn/Pluto. Saturn Conjunct Pluto 2020 Dates* 6 Apr 2019 to 28 May 20197 Dec 2019 to 10 Feb 202010 Sep 2020 to 13 Oct 2020 *Within 3º Orb When I read Sue Tompkins interpretation of Saturn/Pluto connections I realised that we must already be feeling this conjunction already!

“Saturn-Pluto people often feel persecuted. Enslave ~ Unslave It seems these days everyone is competing to be the most oppressed group. Planetary. Eternity.