Production of methane and ethylene from plastic in the environment. Abstract Mass production of plastics started nearly 70 years ago and the production rate is expected to double over the next two decades. 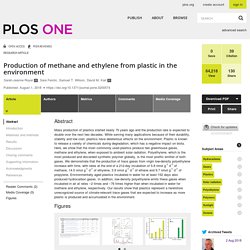 Greenhouse gases linked to degrading plastic. Several greenhouse gases are emitted as common plastics degrade in the environment, according to researchers from the University of Hawaiʻi at Mānoa School of Ocean and Earth Science and Technology (SOEST). 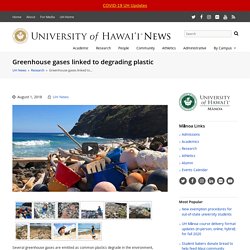 Mass production of plastics started nearly 70 years ago, and the production rate is expected to double over the next two decades. While serving many applications because of their durability, stability and low cost, plastics have a negative impact on the environment. Plastic is known to release a variety of chemicals during degradation, some of which negatively affect organisms and ecosystems. What happens when plastic degrades? State Plastic and Paper Bag Legislation. State legislatures have considered a number of measures to reduce the prevalence of plastic bags at grocery stores and other businesses. 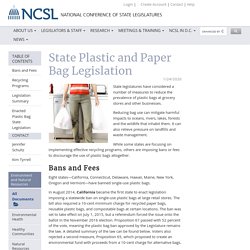 Reducing bag use can mitigate harmful impacts to oceans, rivers, lakes, forests and the wildlife that inhabit them. It can also relieve pressure on landfills and waste management. While some states are focusing on implementing effective recycling programs, others are imposing bans or fees to discourage the use of plastic bags altogether. Bans and Fees Eight states—California, Connecticut, Delaware, Hawaii, Maine, New York, Oregon and Vermont—have banned single-use plastic bags.

In August 2014, California became the first state to enact legislation imposing a statewide ban on single-use plastic bags at large retail stores. Hawaii has a de facto statewide ban as all of its most populous counties prohibit non-biodegradable plastic bags at checkout, as well as paper bags containing less than 40 percent recycled material. Recycling Programs. Africa is leading the world in plastic bag bans — Quartz Africa. As of June 1, travelers to Tanzania will have to pack very carefully. 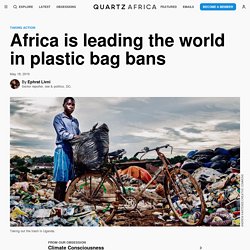 The country announced the implementation of the second phase of its plastic bag ban on May 16. Visitors are advised to avoid packing or carrying any plastic bags as they’ll have to leave these at a designated desk in the airport. The first phase of the country’s anti-plastic initiative began in 2017 to “protect the youth and environment,” with an initial ban on the manufacture of plastic bags and in-country distribution. Phase two extends to tourists. Parliament seals ban on throwaway plastics by 2021. 560 MEPs voted in favour of the agreement with EU ministers, 35 against and 28 abstained. 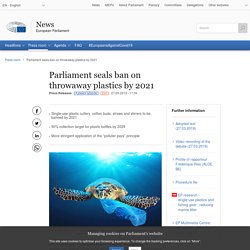 The following products will be banned in the EU by 2021: Alarm raised as plastics found in ocean fish larvae. New research shows that many larval fish species from different ocean habitats are ingesting plastics in their preferred nursery habitat. 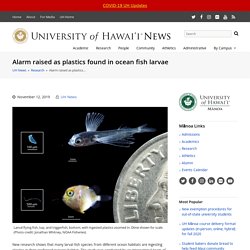 The study was conducted by an international team of scientists from the National Oceanic and Atmospheric Administration (NOAA) and the University of Hawaiʻi at Mānoa. Many of the world’s marine fish spend their first days to weeks feeding and developing at the ocean surface. Larval fish are the next generation of adult fish that will supply protein and essential nutrients to people around the world.

However, little is known about the ocean processes that affect the survival of larval fish. While recent evidence shows that adult fish ingest plastic, this is the first study to show that larval coral reef fish and pelagic species are also consuming plastic, as early as days after they are spawned. Production, use, and fate of all plastics ever made. Abstract. 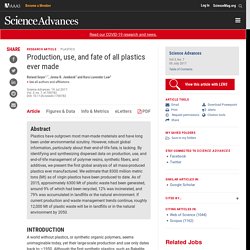 The Plastics Pipeline: A Surge of New Production Is on the Way. As public concern about plastic pollution rises, consumers are reaching for canvas bags, metal straws, and reusable water bottles. 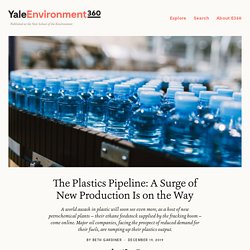 But while individuals fret over images of oceanic garbage gyres, the fossil fuel and petrochemical industries are pouring billions of dollars into new plants intended to make millions more tons of plastic than they now pump out. Companies like ExxonMobil, Shell, and Saudi Aramco are ramping up output of plastic — which is made from oil and gas, and their byproducts — to hedge against the possibility that a serious global response to climate change might reduce demand for their fuels, analysts say.

Petrochemicals, the category that includes plastic, now account for 14 percent of oil use, and are expected to drive half of oil demand growth between now and 2050, the International Energy Agency (IEA) says. The World Economic Forum predicts plastic production will double in the next 20 years. Anything but Reduction: The American Chemistry Council’s Empty “Circular Economy” Promises. 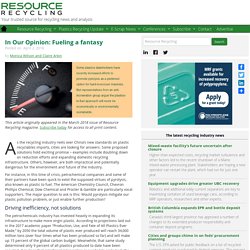 Subscribe today for access to all print content. As the recycling industry reels over China’s new standards on plastic recyclables imports, cities are looking for answers. Some proposed solutions hold exciting promise – examples include doubling down on reduction efforts and expanding domestic recycling infrastructure. Energy Recovery from Plastics. To meet our nation’s economic and environmental goals, America needs a comprehensive energy policy that draws on our nation’s diverse energy supplies, including renewable and alternative sources such as energy recovery from plastics. 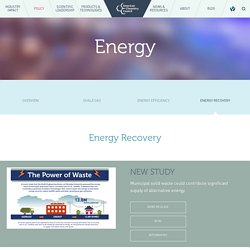 Policy Background Given our nation’s need to control energy costs and improve energy security, many policymakers are calling for a comprehensive national energy policy that promotes and develops all of America’s own energy resources—conventional and shale natural gas, oil, wind, nuclear, solar, etc. —to diversify energy supply. One source of energy derived from plastics could further expand the diversity of America's energy supply. Technologies today are able to recover the energy contained in plastics. ACC’s Policy Position.

Piling Up: How China’s Ban on Importing Waste Has Stalled Global Recycling. It has been a year since China jammed the works of recycling programs around the world by essentially shutting down what had been the industry’s biggest market. China’s “National Sword” policy, enacted in January 2018, banned the import of most plastics and other materials headed for that nation’s recycling processors, which had handled nearly half of the world’s recyclable waste for the past quarter century. The move was an effort to halt a deluge of soiled and contaminated materials that was overwhelming Chinese processing facilities and leaving the country with yet another environmental problem — and this one not of its own making. In the year since, China’s plastics imports have plummeted by 99 percent, leading to a major global shift in where and how materials tossed in the recycling bin are being processed.

Climate Desk. Recycling News and Analysis - Resource Recycling. Ambition Zero Carbon. Climate change: 12 years to save the planet? Make that 18 months. Image copyright clintspencer Do you remember the good old days when we had "12 years to save the planet"? Now it seems, there's a growing consensus that the next 18 months will be critical in dealing with the global heating crisis, among other environmental challenges. Last year, the Intergovernmental Panel on Climate Change (IPCC) reported that to keep the rise in global temperatures below 1.5C this century, emissions of carbon dioxide would have to be cut by 45% by 2030. After climate change apocalypse, kindness will be most important survival skill. Explaining climate change I am an archaeologist and a wilderness survival instructor. Because I study societies that have collapsed, and since I teach basic outdoor skills, people ask me about what to do in a natural disaster, social upheaval, or some apocalyptic event.

Right now, much of that concern relates to climate change. What I would do, where I would go, and what equipment I would take? I understand the preoccupation with things falling apart. Bike Lanes May Be The Most Cost-Effective Way To Improve Public Health. Amazing things happen to a city once people are encouraged to switch to bike commuting: the air quality improves throughout the city, which benefits everyone, not just cyclists. Quieter roads are more pleasant roads to be around, and they’re less congested for those who still insist on driving. And of course riding a bike every day brings all kinds of health benefits to the cyclists themselves. A new study from researchers at Columbia University’s Mailman School of Public Health shows just how big those benefits can be. Per dollar spent, constructing bike lanes is a cheap way to improve public health. For instance back in 2005, New York City spent $10 million on curbing traffic as part of the federally-funded Safe Routes to School program.