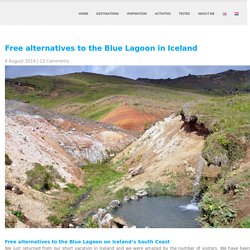 We have been coming to Iceland since 2007 on an (almost) yearly base and it’s gotten so much busier than before. However, we still love Iceland a lot and will always be back for a next time. Hotel Ranga Iceland Volcano base 4 star top resort and dining in South Iceland. ABOUT ION LUXURY ADVENTURE HOTEL - Ion Iceland. Birdlife is widely diversified within lakes and streams around the Hengill area. 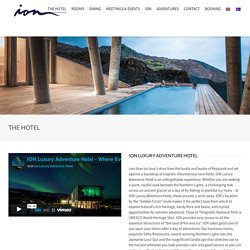 Known are about 50 species of breeding birds in the Thingvellir area and 20 species are seen regularly during the winter. Several changes in birds have occurred, ducks have decreased and water rails are gone. Greylag Geese have increased and are usually in a large group by the agricultural land. The Great Northern Diver is common at the Úlfljóts-lake and Villinga-Water. Fulmar nests in the cliffs of Nesjaey, by Hestvík and by Steingrímsstöð. Folklore mentions a so called “hot spring bird”. Fox, Mink and Wood Mouse are the only mammalian species that stay continuously in the region.

In the lake there are three kinds of fish, Arctic Char , Brown Trout and Sticklebacks. It is the only lake in the world that has four varieties of Arctic Char. The Worst Mistakes Tourists Make in Iceland. Iceland: active volcanoes, boiling surface water, uninhabited roadless expanses, jagged sea cliffs, shifting ice masses and teeny little bags of human flesh trying to navigate them. 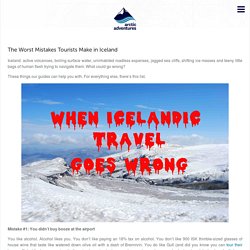 What could go wrong? These things our guides can help you with. For everything else, there’s this list. Mistake #1: You didn’t buy booze at the airport You like alcohol. If these options don’t appeal to you, stock up at duty free at your home airport or Keflavík. Mistake #2: You got your hair wet at the Blue Lagoon Ah, yes. If you have a deep conditioner, use it now. Mistake #3: You only packed hiking clothes You came for ice climbing and scuba diving, and packed with myopic diligence. Yes, there are bars that cater to the I-haven’t-taken-off-this-backpack-since-2003 crowd, but if you’re looking to stand out a little less, you can apply the money you saved pregaming with your airport liquor towards some clothing not involving gore-tex and visibility strips. . - Kara. Eating in Iceland with kids: Bizarre Foods Edition.

What did you eat in Iceland? 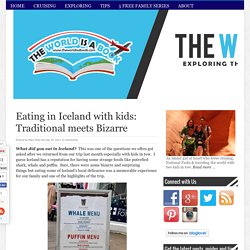 This was one of the questions we often got asked after we returned from our trip last month especially with kids in tow. I guess Iceland has a reputation for having some strange foods like putrefied shark, whale and puffin. Sure, there were some bizarre and surprising things but eating some of Iceland’s local delicacies was a memorable experience for our family and one of the highlights of the trip. Let’s get the big one over with. Whale. Reading many things online, we learned these whales were not endangered, were hunted humanely and a limit has been set on how many were captured. There was an abundance of seafood eateries which shouldn’t be a surprise since they’re located in the middle of the Atlantic ocean. It was a small family restaurant that has been around for years run by a former fisherman and Coast Guard chef. Voyage en Islande, randonnées et découverte - Grand Nord Grand Large. ISLANDE Geysir et Gulfoss - voyage à cheval et randonnées - RANDO CHEVAL.