Gaz de schiste : Londres suspend la fracturation hydraulique par crainte des secousses sismiques. What The Frack? UK May Water Down Seismic Activity Warnings. Reports say that the UK government may be considering changing the rating system that so far has been used to halt fracking activity if seismic disturbances are detected, effectively creating a higher threshold for what constitutes problematic ground movement — and environmental groups are not happy. Currently, the UK operates a traffic light system that allows fracking operations to continue only if there is zero seismic activity detected. Between 0.0-0.5 seismic activity means fracking operations may continue only under close scrutiny.

If at any point levels exceed 0.5, operations are immediately halted. Obviously, the fracking industry has not been happy about this, and now there are signs the Conservative government is considering making changes. Independent new outlets later confirmed the story. Be an informed activist. Get fact-based insights about newsworthy causes delivered daily to your inbox. Thanks for subscribing! Photo credit: Thinkstock. Oklahomans are suing frackers over earthquakes. Residents of Pawnee, Oklahoma, have filed a class-action lawsuit against 27 oil and natural gas companies, alleging that they are responsible for damage caused by earthquakes linked to fracking. 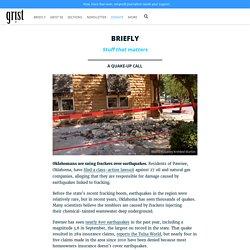 Before the state’s recent fracking boom, earthquakes in the region were relatively rare, but in recent years, Oklahoma has seen thousands of quakes. Many scientists believe the temblors are caused by frackers injecting their chemical-tainted wastewater deep underground. Pawnee has seen nearly 800 earthquakes in the past year, including a magnitude 5.8 in September, the largest on record in the state. That quake resulted in 289 insurance claims, reports the Tulsa World, but nearly four in five claims made in the area since 2010 have been denied because most homeowners insurance doesn’t cover earthquakes. Earthquakes caused by oil drillers are now so common that the government just assumes they’re coming. Oklahomans Can Sue Fracking Companies for Earthquake Damages. Fracking is causing Oklahoma’s earthquake “swarm” This story is reproduced here as part of the Climate Desk collaboration. 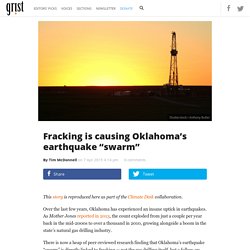 Over the last few years, Oklahoma has experienced an insane uptick in earthquakes. As Mother Jones reported in 2013, the count exploded from just a couple per year back in the mid-2000s to over a thousand in 2010, growing alongside a boom in the state’s natural gas drilling industry. There is now a heap of peer-reviewed research finding that Oklahoma’s earthquake “swarm” is directly linked to fracking — not the gas drilling itself, but a follow-up step where brackish wastewater is re-injected into disposal wells deep underground.

It’s a troubling trend in an industry that thrives under notoriously lax regulations, especially when the risk to property and public safety is so obvious. Natural gas drilling is causing earthquakes in Europe too. Shell and ExxonMobil, as well as the Dutch government, ignored for decades that drilling in Europe’s largest gas field was causing earthquakes that put human lives and property at risk. 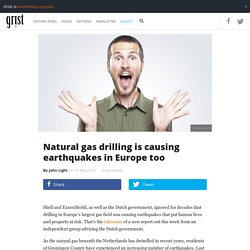 That’s the takeaway of a new report out this week from an independent group advising the Dutch government. As the natural gas beneath the Netherlands has dwindled in recent years, residents of Groningen County have experienced an increasing number of earthquakes. Last year, the area was hit with 84. The New York Times summarized what’s going on in a feature last summer: A half-century of extraction has reduced the field’s natural pressure in recent years, and seismic shifts from geological settling have set off increasingly frequent earthquakes — more than 120 last year, and at least 40 this year.

Though the quakes started in the 1990s, the strongest came in 2012 when a 3.6 magnitude quake caused widespread damage to buildings in a region where structures were not designed to withstand seismic activity. Fracking is definitely causing earthquakes, another study confirms. Yet another study has found a link between hydraulic fracturing and earthquakes. 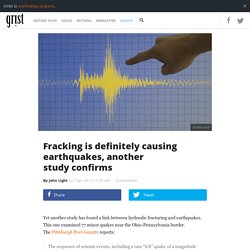 This one examined 77 minor quakes near the Ohio-Pennsylvania border. The Pittsburgh Post-Gazette reports: The sequence of seismic events, including a rare “felt” quake of a magnitude 3.0 on the Richter scale, was caused by active “fracking” on two nearby Hilcorp Energy Co. well pads, according to the research published online [Tuesday] in the Bulletin of the Seismological Society of America.The study found that although it is rare for fracking associated with shale gas extraction to cause earthquakes large enough to be felt on the surface by humans, seismic monitoring advances have found the number of “felt and unfelt” earthquakes associated with fracking have increased over the past 10 years. Studies have found that it’s not just the actual drilling and extraction that causes the earthquakes; more often, the routine practice of injecting fracking wastewater into deep disposal wells is to blame. 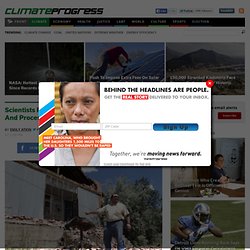 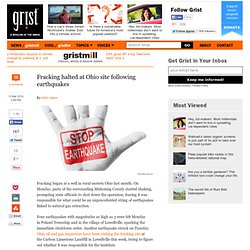 On Monday, parts of the surrounding Mahoning County started shaking, prompting state officials to shut down the operation, fearing it was responsible for what could be an unprecedented string of earthquakes linked to natural gas extraction. Four earthquakes with magnitudes as high as 3 were felt Monday in Poland Township and in the village of Lowellville, sparking the immediate shutdown order. Another earthquake struck on Tuesday. Ohio oil and gas inspectors have been visiting the fracking site at the Carbon Limestone Landfill in Lowellville this week, trying to figure out whether it was responsible for the temblors. “Out of an abundance of caution,” a state official said, “we notified the only oil and gas operator in the area and ordered them to halt all operations until further assessment can take place.”

Ohio Earthquakes Linked To Fracking, A First For Region. COLUMBUS, Ohio (AP) — Geologists in Ohio have for the first time linked earthquakes in a geologic formation deep under the Appalachians to hydraulic fracturing, leading the state to issue new permit conditions Friday in certain areas that are among the nation's strictest. 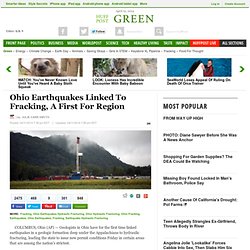 A state investigation of five small tremors last month in the Youngstown area, in the Appalachian foothills, found the injection of sand and water that accompanies hydraulic fracturing, or fracking, in the Utica Shale may have increased pressure on a small, unknown fault, said State Oil & Gas Chief Rick Simmers. He called the link "probable. " Ohio blames frackers for earthquakes. Ohio officials have linked fracking in the state to an unprecedented swarm of earthquakes that struck last month. 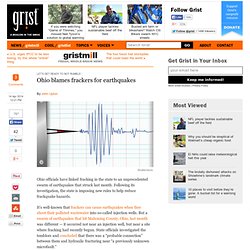 Following its investigation, the state is imposing new rules to help reduce frackquake hazards. It’s well-known that frackers can cause earthquakes when they shoot their polluted wastewater into so-called injection wells. But a swarm of earthquakes that hit Mahoning County, Ohio, last month was different — it occurred not near an injection well, but near a site where fracking had recently begun. State officials investigated the temblors and concluded that there was a “probable connection” between them and hydraulic fracturing near “a previously unknown microfault.”

On Friday, following the discovery, the Ohio Department of Natural Resources announced that frackers will need to comply with new permit regulations. Texans want frackers to stop causing earthquakes. Some North Texans who have been enduring a months-long flurry of earthquakes want the shaking to stop — and they believe that means putting an end to a controversial fracking practice. 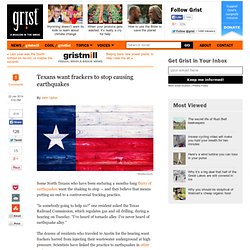 “Is somebody going to help us?” One resident asked the Texas Railroad Commission, which regulates gas and oil drilling, during a hearing on Tuesday. “I’ve heard of tornado alley. I’ve never heard of earthquake alley.” The dozens of residents who traveled to Austin for the hearing want frackers barred from injecting their wastewater underground at high pressure. University studies if quakes in North Texas linked to fracking. Fracking triggered more than 100 earthquakes in Ohio. A single fracking wastewater well triggered 167 earthquakes in and around Youngstown, Ohio, during a single year of operation. 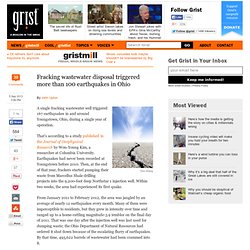 That’s according to a study published in the Journal of Geophysical Research by Won-Young Kim, a researcher at Columbia University. Earthquakes had never been recorded at Youngstown before 2010. Then, at the end of that year, frackers started pumping their waste from Marcellus Shale drilling projects into the 9,200-foot deep Northstar 1 injection well. Within two weeks, the area had experienced its first quake. From January 2011 to February 2012, the area was jangled by an average of nearly 12 earthquakes every month. After the injection well fell into disuse, the string of earthquakes quickly tapered away. Kim found that the frequency and intensity of earthquakes in the area was closely linked to the daily pressure levels in the well. Confirmed: Fracking triggers quakes and seismic chaos. Major earthquakes thousands of miles away can trigger reflex quakes in areas where fluids have been injected into the ground from fracking and other industrial operations, according to a study published in the journal Science on Thursday.

Previous studies, covered in a recent Mother Jones feature from Michael Behar, have shown that injecting fluids into the ground can increase the seismicity of a region. This latest study shows that earthquakes can tip off smaller quakes in far-away areas where fluid has been pumped underground. Plus de séismes aux Etats-Unis, la faute aux gaz de schiste - Page 2. Biggest Oklahoma Earthquake Ever Linked To Oil Industry. In 2011, a report from the United States Geological Survey linked a series of earthquakes in Oklahoma in January 2011 to a fracking operation underway there. There was no definitive proof, but it seemed likely that tracking was related to those Oklahoma earthquakes.

On November 5, 2011, a 5.7 earthquake struck near Prague, in central Oklahoma. Fourteen homes were leveled, schools were closed for repairs, and the quake was felt across 17 states. If it had not been centered in open country, the effects could have been much worse. Quand le gaz de schiste fait trembler la terre. Fracking's Latest Scandal? Earthquake Swarms. At exactly 10:53 p.m. on Saturday, November 5, 2011, Joe and Mary Reneau were in the bedroom of their whitewashed and brick-trimmed home, a two-story rambler Mary's dad custom-built 43 years ago. Their property encompasses 440 acres of rolling grasslands in Prague, Oklahoma (population 2,400), located 50 miles east of Oklahoma City.

And it certainly feeds plenty of speculation that the same phenomenon could be occurring elsewhere. Speculation that would be well-founded, evidently. Right on the heels of Cuadrilla’s announcement, news is spreading that the United States Geological Survey has released a report (pdf) that links a series of earthquakes in Oklahoma last January to a fracking operation underway there. The U.S.G.S. determined that “from the character of the seismic recordings indicate that they are both shallow and unique.” From the report: This post was originally published by Treehugger.