Sunyata Hotel in Dali Old Town / Zhaoyang Architects. Floating Hut / Tomohiro Hata Architect and Associates. Floating Hut / Tomohiro Hata Architect and Associates Architects Location Category Lead Architect Tomohiro Hata Area 78.43 m2 Project Year 2016 Photographs Text description provided by the architects. The construction takes place in a residential zone developed 30 years ago during the bubble period. Although this region used to be an idyllic countryside, following its development by a single developer to residential area as a city block, a rational subdivision into isolated houses surrounded by fences and distant from each other, have been applied to the zone.

Additionally, as a result of a house builders' famous 80's and 90's marketing strategy in Japan using the symbol words “My Home” to reply to the increasing housing demand following the economical growth during the same period , these houses were provided a pitched roof. MilK decoration. De loin, « Refugi dil fieu » ressemble à un chalet traditionnel. 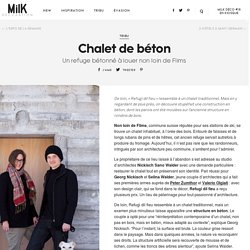 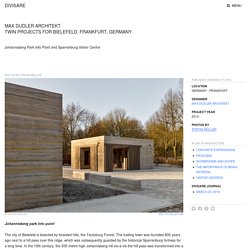 The trading town was founded 800 years ago next to a hill pass over this ridge, which was subsequently guarded by the historical Sparrenburg fortress for a long time. In the 19th century, the 200 metre high Johannisberg hill vis-à-vis the hill pass was transformed into a park as a destination for pleasure trips. The project planned by Max Dudler – consisting of a visitor centre for the Sparrenburg fortress and an info point for the Johannisberg park – uses the two distinct twin buildings to form a relationship between the cultural monument and the landscape monument. 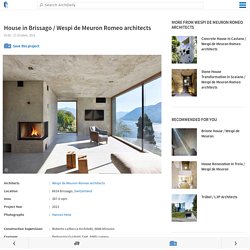 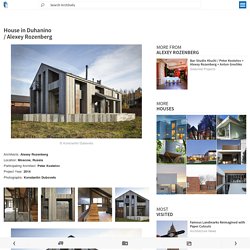 The traditional in this region approach of building using lumber lays at the core of this house construction. However, the thickness of the walls of such buildings does not meet modern requirements for insulation, therefore it was necessary to insulate the walls on the outside which prompted a complex malleable design of the facades. 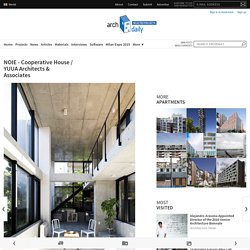 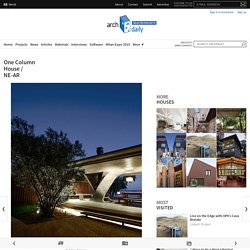 NE-AR has completed an extension and refurbishment for an existing summer house on the shores of a Patagonian lake in the South of Argentina: the One Column House. The existing summer house was lacking of optimum spatial and functional distribution conditions that could fulfil the needs and the ways that the house was used and experienced: the house was sitting far away from the lake shore neglecting the most privileged views towards the lake and its landscape, while at the same time both neighbour houses at the sides block the vistas towards the lake since their footprints were settled closer to the lake shore. Garden House Refugium Laboratorium Klausur / Hertl Architekten. Architects: Hertl Architekten Location: Haratzmüllerstraße 41, 4400 Steyr, Austria Collaborators: Hans Sikora, Hinterndorfer Bau GesmbH Area: 790.0 sqm Project Year: 2014 Photographs: Walter Ebenhofer From the architect. 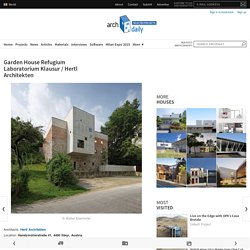 Where in the past a small square marked the medieval gateway to the old town district of Ennsdorf, the garden house stands today. Arisen from an old farmhouse which was entirely ruinous it shapes the counterpart of the historical tollhouse. The traces of the past have slightly vanished, the wayside shrine, that once stood impressive in front of the tollhouse's gable wall, has been moved to the right. House in the Mountains / Wolff Architects. Architects: Wolff Architects Location: Cederberg, West Coast DC, South Africa Architect In Charge: Heinrich Wolff Project Year: 2013 Photographs: James Puttick , Courtesy of Heinrich Wolff Project Team: Temba Jauch, Ant Vervoort, Radinka van der Walt, Maria Wolff, Bayo Windapo Structural Engineers: De Villiers & Hulme Contractor: Africa Formworks From the architect. 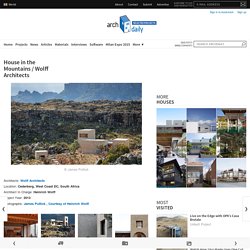 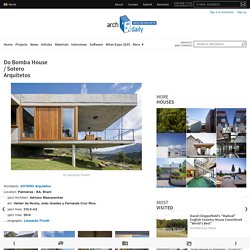 From the architect. Chapada Diamantina, a region characterized by being located on a plateau at an altitude of one thousand meters above sea level in the heart of the state of Bahia (Brazil), hosts a national park with the same name since 1985. Compact Karst House / dekleva gregorič arhitekti. Compact Karst House / dekleva gregorič arhitekti Architects Location Project Team Aljoša Dekleva u.d.i.a., M.Arch. 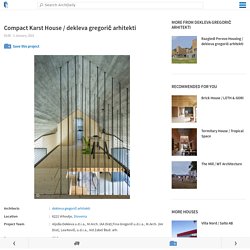 The dwelling is located on the outskirts of a small town in Baix Empordà. It is sited at the boundary between the buildings and the fields surrounding the village. This unique location closes the dwelling to the street, with its back to the town, and opens up with large windows overlooking the view. Villa Além / Valerio Olgiati. Architects: Valerio Olgiati Location: Alentejo, 3400, Portugal Collaborators: Patricia Da Silva (project manager office Olgiati), Daisuke Kokufuda, Liviu Vasiu General Contractor: Matriz Sociedade de Construções Lda. Project Year: 2014 Photographs: Archive Olgiati From the architect. This project is located in Alentejo about 10 km inland from the Atlantic Ocean. The area features a hilly, rural landscape and is covered with beautiful old cork oaks. The climate is mild and dry. House in Koamicho / Suppose Design Office. Architects: Suppose Design Office Location: Koamicho, Hiroshima, Japan Architects: Suppose design office Area: 102.86 sqm Project Year: 0 From the architect.

Posted On Wednesday, 10 Jul 2013 By ddobreva+. House in Byoubugaura / Takeshi Hosaka. House in Byoubugaura / Takeshi Hosaka Architects Location Yokohama, Kanagawa, Japan Structural Engineers Kenji Nawa Area 30.0 sqm Project Year 2012 Photographs From the architect. A house with a basement and two floors above ground was planned in a residential area in Yokohama, which is characterized by rolling hills.