10 Reasons Why We Need An EarthShip Home - Radically Sustainable Buildings 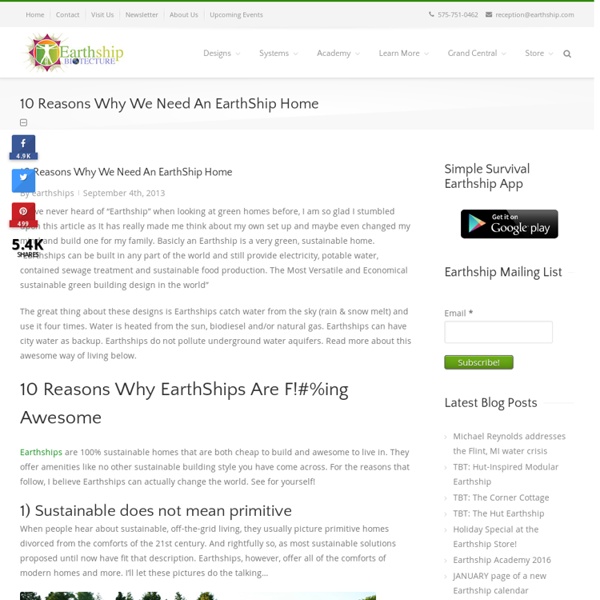 I have never heard of “Earthship” when looking at green homes before, I am so glad I stumbled upon this article as It has really made me think about my own set up and maybe even changed my mind and build one for my family. Basicly an Earthship is a very green, sustainable home. “Earthships can be built in any part of the world and still provide electricity, potable water, contained sewage treatment and sustainable food production. The Most Versatile and Economical sustainable green building design in the world” The great thing about these designs is Earthships catch water from the sky (rain & snow melt) and use it four times. Water is heated from the sun, biodiesel and/or natural gas. Earthships are 100% sustainable homes that are both cheap to build and awesome to live in. 1) Sustainable does not mean primitive When people hear about sustainable, off-the-grid living, they usually picture primitive homes divorced from the comforts of the 21st century. 2) Free Food 4) Warmth & Shelter

Earthship Africa Community Center The Malawi flower has happened. Three rooms, two toilets, and a shower are built. We want to thank the local people of Kapita who made all of us feel at home while we worked with them. Permaculture Design Principles The foundations of permaculture are the ethics (centre) which guide the use of the 12 design principles, ensuring that they are used in appropriate ways. These principles are seen as universal, although the methods used to express them will vary greatly according to the place and situation. They are applicable to our personal, economic, social and political reorganisation as illustrated in the permaculture flower. Each principle can be thought of as a door that opens into whole systems thinking, providing a different perspective that can be understood at varying levels of depth and application. Click on each of the principles icons to find out more, including a catchy tune about each of them – available from the album Permaculture: A Rhymer’s Manual.

Difference Between Organic Gardening and Permaculture - Permaculture Visions Online Institute The Permaculture garden is a lot more than an organic garden. Intelligent design uses free, sustainable energies and resources. It is energy-wise and collaborative to minimise the impact of a site on the surrounding environment. A good design has great potential. It can connect neighbours. The biggest Permaculture site in the world, The Chikukwa Project, has helped whole community.

Volunteer-based hunger relief Keep Austin Fed is a volunteer based 501(c)(3) nonprofit organization that gathers wholesome and nutritious surplus food from commercial kitchens and distributes it to area charities that serve hungry people in need. Our mission: Sharing healthy nutrition with our hungry neighbors by keeping surplus food out of the waste stream. In 2004, founder Randy Rosens saved high quality catered food from an Austin Museum of Art Fundraising event at Laguna Gloria that was headed to the dumpster. The food fed a group of women and children living at a shelter in South Austin.

ANACONDA PROD Right in the middle of ”The green house of the future” how to do it DVD postproduction ! 590 gigs of wood, nails, tires, interaction with naturals phenomenon and hope for the future through autonomous production of local and healthy food for everyone ! Short Film in both French & English about the last Northeast Permaculture Convergence that has been held, 2013 July 5-7, in Frelighsburg, QC, Canada Court film sur la convergence de la permaculture qui s’est tenue à Frelighsburg, au Québec, Canada du 5 au 7 juillet 2013.

The Pros and Cons of Joining a CSA The spring harvest is upon us, and in many communities, it's the last call to sign up for a CSA for the full growing season. An acronym for Community Supported Agriculture, CSA commonly refers to a group whose members receive weekly shares of food from a certain farm (or groups of farms) in their region. Each member is supporting their local agriculture, essentially, not through a retailer or market but directly, and at pop-up community locations to serve the pickup times such as schools, parks, or friendly neighborhood bars. Being in a CSA is a commitment, and you can't just swoop in to pick out your produce without signing up first. Fortunately, the number of CSAs has grown rapidly over the last few years, and in New York City alone, there are a total of 110 individual groups spanning several neighborhoods.

Robert Wood, Electrical Engineer Information, Facts, News, Photos Electrical engineer Robert Wood is an expert in robots that fly, robots you wear, squishy robots, and tiny robots the size of a nickel. He founded the Microrobotics Lab at Harvard University, where he leads a team that invents and develops entirely new classes of microrobots and robots made of soft materials that may one day play a transformative role in medicine, search-and-rescue missions, and agriculture. For years, the team has focused on creating autonomous flying microrobots called RoboBees that could be sent on missions deemed too dangerous, remote, or tedious for humans or animals. The machines have a housefly-size thorax, three-centimeter wingspan, and a weight of 60 milligrams.

Scientists: Save the Bees, or People Will Go Hungry Bees pollinate crops. Crops nourish people. Fewer bees (owing to pesticides, loss of habitat, and disease) means less food and more malnutrition. It sounds logical, but there's been no science to back up this accepted wisdom—until now. In a first-of-its-kind study published this month in the journal PLOS One, researchers at two New England universities have connected falling populations of pollinators, such as bees, to shortfalls of vitamin A, a crucial nutrient. The scientists examined what foods people eat in four nations where women and children suffer from high rates of malnutrition: Zambia, Mozambique, Uganda, and Bangladesh.

Will Allen takes on an Urban Food Desert Will Allen is bringing farming and fresh foods back into city neighborhoods. posted Feb 13, 2009 At the northern outskirts of Milwaukee, in a neighborhood of boxy post-WWII homes near the sprawling Park Lawn housing project, stand 14 greenhouses arrayed on two acres of land. Advantages and Disadvantages of Eating Fast Food Eating Advantages and Disadvantages of Eating Fast Food Eating is one of the human’s activities that it is enjoyable. There are many kinds of food available to eat, no exception is fast food. Fast food is a kind of meal which is prepared or served quickly. Kids science: Acids and Bases Science >> Chemistry for KidsScience >> Chemistry for Kids Acids and bases are two special kinds of chemicals. Almost all liquids are either acids or bases to some degree.