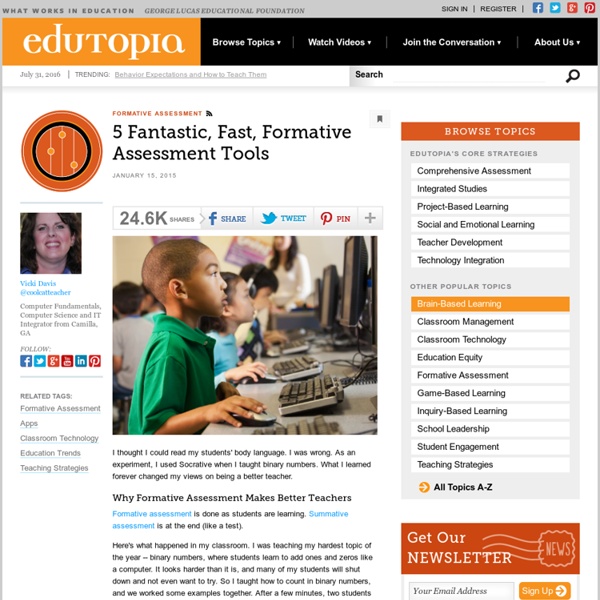 I thought I could read my students' body language. I was wrong. As an experiment, I used Socrative when I taught binary numbers. What I learned forever changed my views on being a better teacher. Why Formative Assessment Makes Better Teachers Formative assessment is done as students are learning. Here's what happened in my classroom. "We've got this, it's easy," they said. I looked at the other students and asked, "Do you have this?" They nodded their heads furiously up and down in a "yes." My teacher instincts said that everyone knew it, but I decided to experiment. I was floored. I taught for another few minutes and gave them another problem. But the end result was not what you think. I am sold. Good teachers in every subject will adjust their teaching based upon what students know at each point. Formative Assessment Toolkit Learn the strengths and weaknesses of each tool. 1. Socrative can be used for quick quizzes and also on the fly, as I've already shared. 2. 3. 4. 5.

Two stars and a bloody wish! A heap of epithets is poor praise: the praise lies in the facts, and in the way of telling them.Jean de La Bruyère We are held hostage by our superstitious belief in the mystical power of marking to cure all educational ills. It won’t. A teacher inscribing marks in students’ exercise books is every bit as mundane as it sounds; in my 15 years in the classroom it rarely resulted in much. But that’s not really why we mark. How to Assess an Arts Integration Lesson One of the many things I hear from teachers about attempting an Arts Integration lesson is “how and why should I assess the arts piece”? This is such a valid concern because many classroom teachers have never had any formal training in an artform, nor were they ever taught the pedagogy of teaching the arts in their educational programs. This is something that needs to be provided during teacher education programs, but until that time comes, many teachers are uncomfortable “grading” an Arts Integration lesson product. First off, let’s just start with good teaching practice: If you teach it, you assess it. Otherwise, what’s the point in teaching it? So if you are teaching an Arts Integration lesson (the benefits of which are so many it’s mind boggling), then you need to assess the arts piece.

20 Observable Characteristics Of Effective Teaching - 20 Observable Characteristics Of Effective Teaching by TeachThought Staff What makes an effective teacher? As Students Opt Out of Common Core Exams, Some Say Movement Is Not About Testing Tens of thousands of parents and students nationwide are engaging in civil disobedience by refusing to participate in federally mandated standardized tests, as states are fully deploying new exams aligned to the Common Core State Standards for the first time. While the opt-out movement has gained steam from some looking to protest the controversial academic standards and what they say is an overemphasis on testing in schools, some of its leaders say it's about more than just those two things. "Opt-out is not an anti-testing movement. This is a movement to reclaim and do what’s right for kids in public schools," says Tim Slekar, a leader of the United Opt Out movement in Wisconsin and dean of the school of education at Edgewood College. "This is a movement to restore real learning."

Plickers 2.0 An Easy to Use Student Response System Why Should You Use Plickers? Plickers is a FREE app that can be used on any IOS or Android operating system developed by Nolan Amy. Students will receive a card that has a number on it and the answer choices A, B, C, and D. Self-Assessment Inspires Learning Self-reflection is self-assessment, and one of the most significant learning tools we can model for our students. Ultimately, we want our children and adolescents to be the self-assessors of their work, dispositions, and goals. Research repeatedly reports that the difference between good teachers and superior teachers is that superior teachers self-reflect. The brain is wired for this strategy, and it has been a part of our evolution. When we teach to a child's or adolescent's brain, we empower that student with the "inner resources" that directly affect his or her ability to pay attention, engage, and create meaningful learning experiences. School culture is simply about relationships, and the brain is a relational organ designed to survive, think, and feel.

10 Reasons Every Teacher Needs A Professional Learning Network - 10 Reasons Every Teacher Needs A Professional Learning Network by TeachThought Staff What’s a professional learning network? According to Marc-André Lalande, “a Personal Learning Network is a way of describing the group of people that you connect with to learn their ideas, their questions, their reflections, and their references. During PARCC testing, schools losing art, music, other 'specials' Waters Elementary School, a fine arts neighborhood school in Ravenswood Gardens, gave up art and music and drama during the week the school took PARCC tests. It wasn’t just the third- through eighth-graders being tested who missed out, though, as they might during any standardized testing days, Waters dad Tim Lacey said. Classes also were canceled even for younger children, like his first-grader.

Socrative - Chromebook Classroom Socrative is a student response system. Instead of students using clickers to answer questions, they use their Chromebooks (or any web enabled device). Socrative can be used for bell ringers, quizzes, checks for understanding or exit tickets. Socrative recently released Socrative Snow. Snow was a major update to the interface and some other improvements to the tool itself.