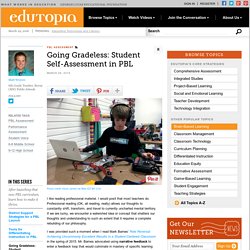 I would posit that most teachers do. Professional reading (OK, all reading, really) allows our thoughts to constantly shift, transform, and travel to currently uncharted mental territory. If we are lucky, we encounter a watershed idea or concept that shatters our thoughts and understanding to such an extent that it requires a complete rebuilding of our philosophy. I was provided such a moment when I read Mark Barnes’ Role Reversal: Achieving Uncommonly Excellent Results in a Student-Centered Classroom in the spring of 2015.

Mr. My Goal It was my intention to simultaneously promote mastery learning as well as increase students' ability to metacognitively assess their work against a given set of standards. Remove grades from the daily equation. My Plan. Cloud-based assessment platform is free for educators. Creating, sharing, delivering and grading of tests, along with analysis of results, happens in real-time in one platform. 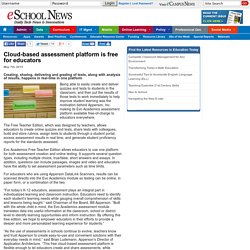 Why you should stop testing and start assessing. By Torrey Trust April 20th, 2015 Both the ISTE Standards for Teachers (2008) and CAST’s Universal Design for Learning principles recommend allowing students to express their ideas and knowledge in a variety of ways. 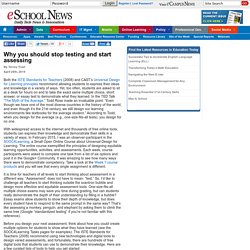 Yet, too often, students are asked to sit at a desk for hours on end to take the exact same multiple choice, short answer, or essay test to demonstrate what they learned. In the TED Talk “The Myth of the Average,” Todd Rose made an invaluable point: “Even though we have one of the most diverse countries in the history of the world, and even though it’s the 21st century, we still design our learning environments like textbooks for the average student.” According to Todd, when you design for the average (e.g., one-size-fits-all tests), you design for no one. With widespread access to the internet and thousands of free online tools, students can express their knowledge and demonstrate their skills in a variety of ways. 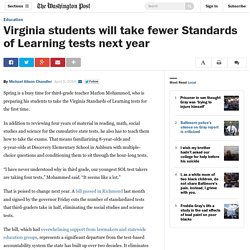 Politicians Introduce Bills That Would Work To Reduce The Role Of School Standardized Testing. In the same week that the Senate Committee on Health, Education, Labor and Pensions (HELP) held its first hearing on the issue of rewriting No Child Left Behind, two separate groups of lawmakers introduced bills that would also work to dial down aspects of the law’s divisive legacy. 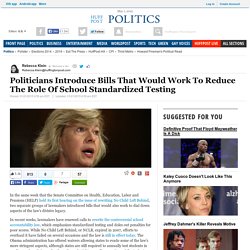 In recent weeks, lawmakers have renewed calls to rewrite the controversial school accountability law, which emphasizes standardized testing and doles out penalties for poor scores. While No Child Left Behind, or NCLB, expired in 2007, efforts to overhaul it have failed on several occasions and the law is still in effect today. The Obama administration has offered waivers allowing states to evade some of the law’s more stringent aspects, although states are still required to annually test students in reading and math in grades three through eight, as well as one time while students are in high school. Civics Education Testing Only Required In 9 States For High School Graduation: CIRCLE Study. A study by the Center for Information and Research on Civil Learning & Engagement at Tufts University has found that most states do not emphasize civic education, which includes learning about citizenship, government, law, current events and related topics. 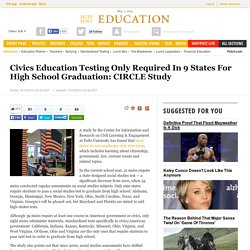 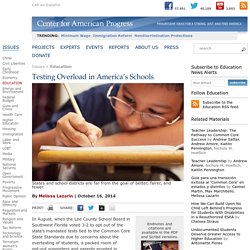 By Melissa Lazarín | October 16, 2014 PRINT: SHARE: Endnotes and citations are available in the PDF and Scribd versions. Download the report: PDFDownload introduction & summary: PDFRead it in your browser: Scribd. Why you should stop testing and start assessing. By Torrey Trust April 20th, 2015 One educator issues a challenge to all: skip the Scantron and discover what students really know Ed. note: Innovation In Action is a new monthly column from the International Society of Technology in Education focused on exemplary practices in education. 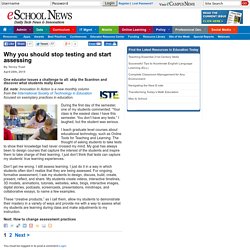 6 reasons it's important to create your own online assessments. How Should We Measure Student Learning? The Many Forms of Assessment. Linda: The United States is at a moment where it could really transform its assessment systems. 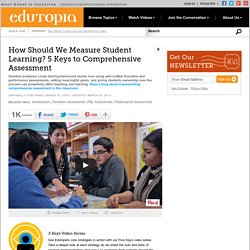 Most of our testing is multiple choice tests, pick one answer out of five, which is something you will never do in applying knowledge in the real world. Our assessments need to evolve to reflect the skills and knowledge that we actually value and that we need schools to teach and our children to learn. 9 Ways to Assess without Standardized Tests. 10 ways to assess learning without tests… A tweet by @wmchamberlain which caught my eye the other day, was the catalyst for this 10 ways post. 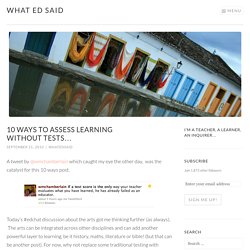 Today’s #edchat discussion about the arts got me thinking further (as always). The arts can be integrated across other disciplines and can add another powerful layer to learning, be it history, maths, literature or bible! (but that can be another post). Assessing learning without tests - The Washington Post. . Courtesy of The Johns Hopkins Center for Talented Youth In this era in which standardized tests are the be-all and end-all of accountability, it may seem impossible to imagine a teacher evaluating how well students are learning without giving them a test. Joanne Yatvin actually did it and she explains it in this post. Yatvin is a past president of the National Council of Teachers of English who now supervises student teachers for Portland State University. She also writes books for teachers. CAI_for_Progress_Monitoring_in_RTI.pdf. What Schools Could Use Instead Of Standardized Tests : NPR Ed. Close your eyes for a minute and daydream about a world without bubble tests.

Education Week recently reported that some Republican Senate aides are doing more than dreaming — they're drafting a bill that would eliminate the federal mandate on standardized testing. Annual tests for every child in reading and math in grades 3 through 8, plus one in high school, have been a centerpiece of federal education law since 2002. No Child Left Behind, the current incarnation of the Elementary and Secondary Education Act, requires them. But this law has been overdue for reauthorization since before President Obama took office. The Senate plans to take the matter up early this year. Discussions about cutting back on these requirements comes at a time of growing concern about the number of tests kids take and the time they spend taking them. Education Secretary Arne Duncan says he is concerned about testing too, but he has written he "strongly believes" in annual tests as an educational tool.

5 Ideas to Prepare Students for Success Without Standardized Testing  Just type the word "testing" into the search box on Facebook and you'll find thousands of parents distraught over the standardized tests their children are being forced to take despite the fact that these parents know it is not in the best interests for their children who in many cases are becoming physically ill and emotionally traumatized by the experience of sitting for up to two weeks straight filling out bubble sheets and answering prompts.

Schools are reluctant and even misleading when it comes to informing parents they can simply opt out often arguing that although they acknowledge that it might not be in the best interest of the child, without standardized tests, everything will fall apart. For many there is no alternative imaginable as in this comment from a graduate student studying to be a teacher. I can't STAND standardized tests. Every professor (and grad student) at my teaching college hates them. Educators Spend Four Weeks Per Year Assessing Student Reading Skills  Embedded Assessment Reduces Cost, Dependence on Traditional Testing and Ties Data to Instruction. 5 Fantastic, Fast, Formative Assessment Tools. I thought I could read my students' body language.

I was wrong. As an experiment, I used Socrative when I taught binary numbers. What I learned forever changed my views on being a better teacher. Why Formative Assessment Makes Better Teachers Formative assessment is done as students are learning. Here's what happened in my classroom.