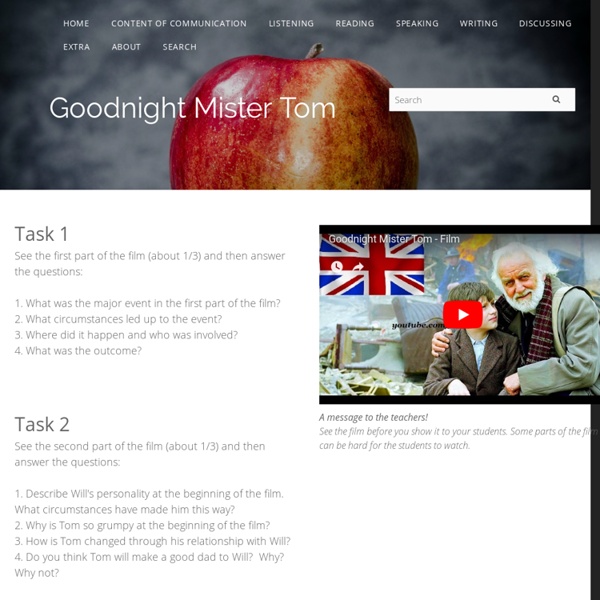 Lost Property by Åsa Lucander Ever since I saw the opening sequence of Pixar’s Up (you know the part I’m talking about), it seems like I’ve noticed a shift in animation—less hijinks, more sentimentality. The cynic in me wants to reject this trend—it feels like so many animators (especially those hoping to work for Disney’s animated behemoth) are crafting shorts that are aren’t just aiming for your heartstrings, but are figuratively trying to rip them out of your chest. It can all come across as a bit manipulative—feeling sad for the sake of feeling sad. But, occasionally, a short comes my way that manages to warm my cold, black heart. Lost Property from director Åsa Lucander is such a film. Unapologetically sentimental and beautiful crafted, Lost Property is an emotional treat.

extr@ English extr@ English promises language learning with laughter, in an authentic London setting. With 30 hilarious, half-hour sitcom programmes, the extra@ series is a delight for anyone learning English, especially young adults. The adventures of the four main characters in their London flat are stylish, sexy and funny. The extr@ series is equally at home in the language class and with friends and family, making it ideal for teacher-led and self-study language learning. The programmes feature lively, colloquial English dialogue. The characters speak naturally, but clearly with constant repetition and strong use of visual prompts that help learners without detracting from the sitcom format.

Social Consciousness: 300+ Mind Expanding Documentaries I watch a lot of documentaries. I think they are incredible tools for learning and increasing our awareness of important issues. The power of an interesting documentary is that it can open our minds to new possibilities and deepen our understanding of the world. On this list of mind expanding documentaries you will find different viewpoints, controversial opinions and even contradictory ideas. Critical thinking is recommended.

Halloween – Conversation.se – Dialoger på engelska Dialog 1 Person 1: – I’m having a Halloween party on Friday. Would you like to come? Person 2: – Yeah, sounds like fun. What time is it? June 2012 One of the most valuable things a teacher can do for students is to help them identify resources for learning outside of class. If students can make a personal—even emotional—connection to material, they will go beyond what is required in an ESOL course in their study of English because it has become enjoyable, not just necessary. I knew I hit the jackpot when students begged to watch another episode of Fox Broadcasting Company’s hit musical comedy-drama Glee. For my advanced-level college students, I had created a listening log together with pre- and postviewing classroom activities on the first episode, titled “Pilot,” which originally aired in 2009.

The Seven Best Short Films for ELT Students - Kieran Donaghy I’ve been writing lesson plans designed around short films for my website Film English for six years. Teachers often ask me how I find the short films I use in my lesson plans. The answer is quite simple: I’ve watched literally thousands of short films and developed an instinct for the type of engaging and simple short films which will work in the ELT classroom. In this article I’d like to share what for me are the seven best short films for the language classroom. The Mirror The Mirror is a short film by Ramon and Pedro which tells the story of a boy’s journey from childhood to old age.

The Other Pair This ELT lesson plan is designed around a short film by Sarah Zorik titled The Other Pair and the themes of altruism and empathy. Students watch a short film, write a story, and speak about a story. I would ask all teachers who use Film English to consider buying my book Film in Action as the royalties which I receive from sales help to keep the website completely free. Language level: Pre-intermediate (A2) –Intermediate (B1) Learner type: All ages Time: 60 minutes

Shakespeare - Hamlet Hamlet, the Prince of Denmark, has come back from university to find that his father, the old king, is dead. His mother has married his father’s brother, Claudius, who is now king of Denmark. Hamlet is shocked that his mother has married so soon after his father’s death, and angry that she has married Claudius. Soon, a ghost is seen walking on the castle walls. The ghost looks like Hamlet’s father, the dead king. When Hamlet sees the ghost, he is told that it is the ghost of his father.

Do Does Did Done The word DO appears a lot in English. This is because it can be a verb TO DO (Do / Does / Did / Done) and can also be an AUXILIARY verb (Do / Does / Did). The Verb - To Do The verb TO DO has four forms. Present Tense: Do / Does Past Tense: Did Past Participle: Done TO DO - Present Tense - (Do / Does) lesson plans with short videos CrowdWish Level: B2/Upper Intermediate and up Skills: Speaking, reading and listening Language: idioms (dream come true, like magic, step in the right direction etc) and wish (including wish + would) ELT Resourceful – Crowdwish