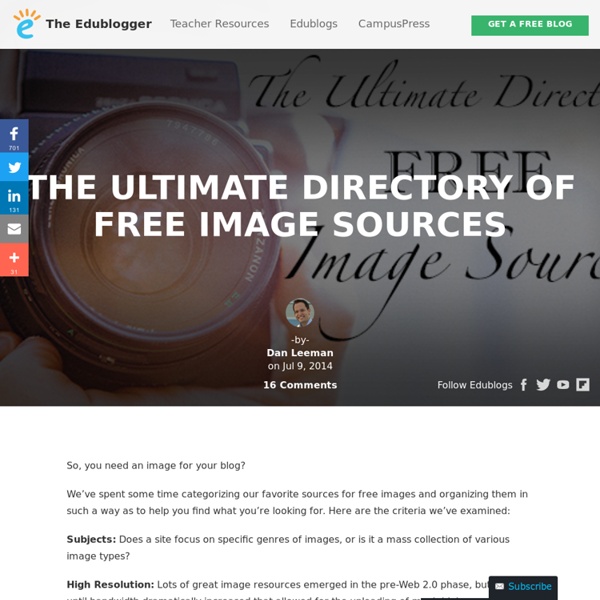 So, you need an image for your blog? We’ve spent some time categorizing our favorite sources for free images and organizing them in such a way as to help you find what you’re looking for. Here are the criteria we’ve examined: Subjects: Does a site focus on specific genres of images, or is it a mass collection of various image types? High Resolution: Lots of great image resources emerged in the pre-Web 2.0 phase, but it wasn’t until bandwidth dramatically increased that allowed for the uploading of much higher resolution images suitable for editing and printing. License: The licenses vary extremely from source to source. Safety: Government sites and many specific subject collections are extremely safe for students to use. Search Engines While these websites do not actually contribute image content themselves, they’re able to index images in a way that makes it easier to search for free content. Category Favorite: Bing Images Bing Images Compfight Creative Commons Search Everystockphoto HiveStock

textorizer Textorizer allows you to make pictures formed with text. It is best described by the sample images below. Although there are many versions around, the only one that is continuing to supported is this one. Excoffizer takes a picture and produces a vector rendition of the picture, made of parallel lines of varying thickness. It is inspired by Roger Excoffon's pictograms for the 1968 Grenoble Winter Olympics. 15 Best Sites for Open Source Images Recently, a teacher we know put together a concise and effective PowerPoint presentation which was well received. The only thing was that when the students inquired where the photos came from, the teacher said he searched for them using Google. The students replied, “You mean you stole them!” (Some of the images still prominently displayed the watermark from iStock photo!)

Cool and Interesting Websites to Visit When You're Bored 30 Jan 2014 Here are some cool and interesting websites that will make you smile and also help beat that afternoon energy slump. couch mode print story 39 Beautiful Photographs with Reflections - PhotographyPla.net Free Photography Bundle: PS actions, LR presets, photo overlays, & print templates! Get it here. Reflections can be an interesting subject that contributes to unique photos. Whether it is a reflection in water, from a glass building, on a pair of sunglasses, or from some other surface, the result can be an intriguing photo. Here we’ll showcase photos from different photographers that display examples of using reflections in photography. Use these as inspiration for your own ideas that can be put into practice.

Yeti 'Nests' Found in Russia? Bigfoot researcher and biologist John Bindernagel claims his research group has found evidence that the Yeti (a Russian "cousin" of the American Bigfoot) not only exists, but builds nests and shelters by twisting tree branches together. "We didn't feel like the trees we saw in Siberia had been done by a man or another mammal.... Twisted trees like this have also been observed in North America and they could fit with the theory that Bigfoot makes nests. The nests we have looked at are built around trees twisted together into an arch shape," Bindernagel told the British tabloid The Sun.

Our Top Picks for Where to Find the Best Free Images for eLearning It can be challenging to find images for your eLearning courses that are stunning, high-resolution and most importantly, free. With the availability of current resources, it’s no longer necessary to use clip art or the type of generic (or cliché) images that make training look dated. Whether you lack the skill or simply the time to create the images for your eLearning courses, we have compiled a list, of what we consider the best free stock photos on the Internet right now. The 100 Best, Most Interesting Blogs and Websites of 2014 Editor’s note: 2015’s list of the best, most interesting websites has arrived! The video above is a sampling from that list. Welcome to the most awesome blog post you’re going to see all year. Yep, it’s the third installment in the super-popular annual series in which I document the sites I think you’ll want to spend a lot of time on in the coming year (below you’ll find a few highlights from recent years in case you missed out).