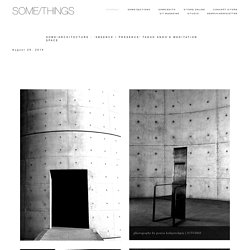 Pine The meditation space was designed by Japanese architect Tadao Ando, to UNESCO headquarters in Paris in 1995. It chose a site next to the Japanese garden designed by Isamu Noguchi in 1958, to create the space for prayer. This is an abstract space that suggests loneliness and spiritual freedom. Nature has a key role in this work. The Ensō (circle) is a sacred symbol in the Zen school of Buddhism and is one of the most common subjects of Japanese calligraphy and it has influenced Ando’s work and vocabulary of architecture. The Meditation Space was constructed with concrete, providing a sense of cleanliness and weightlessness at the same time. Photography & Text by Pouria Khojastehpay | S/TUDIO. 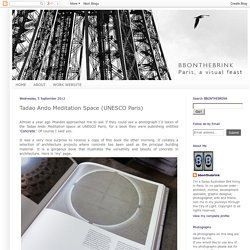 It was a very nice surprise to receive a copy of this book the other morning. It collates a selection of architecture projects where concrete has been used as the principal building material. Landscape Meditation - Faith & Form. Volume 45, Issue 1 :: by Thomas Hanrahan Meditation Hall east elevation, with the three residence halls in the distance. 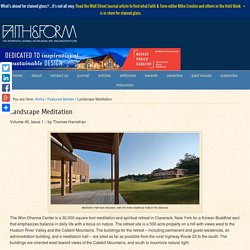 The Won Dharma Center is a 30,000-square-foot meditation and spiritual retreat in Claverack, New York for a Korean Buddhist sect that emphasizes balance in daily life with a focus on nature. The retreat site is a 500-acre property on a hill with views west to the Hudson River Valley and the Catskill Mountains. The buildings for the retreat – including permanent and guest residences, an administration building, and a meditation hall ­– are sited as far as possible from the rural highway Route 23 to the south. The buildings are oriented west toward views of the Catskill Mountains, and south to maximize natural light. Meditation Hall and Administration building, with their connective porches, which frame views. View of the site, with guest residence in distance, and permanent residence in foreground. 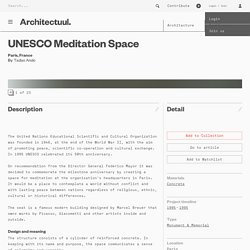 In 1995 UNESCO celebrated its 50th anniversary. On recommendation from the Director General Federico Mayor it was decided to commemorate the milestone anniversary by creating a space for meditation at the organisation's headquarters in Paris. It would be a place to contemplate a world without conflict and with lasting peace between nations regardless of religious, ethnic, cultural or historical differences. The seat is a famous modern building designed by Marcel Breuer that owns works by Picasso, Giacometti and other artists inside and outside. Design and meaning. Meditation Space UNESCO, Paris - Architect Boy. Everyone has his/her own notion of spirituality and tries to touch it in his/her unique way. 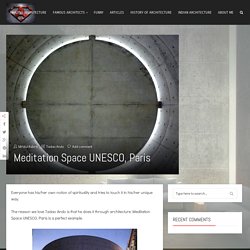 The reason we love Tadao Ando is that he does it through architecture. Meditation Space UNESCO, Paris is a perfect example. Exterior view of the meditation space, a cylinder with only 2 entrances and skylight UNESCO celebrated its 5oth anniversary in 1995. To commemorate that event, it was decided to construct a place of prayer for world peace that transcends religious and ethnic distinctions. The headquarters is a well-known work of modern architecture designed by Marcel Breuer; there are works of by Picasso, Giacometti and other artists inside and outside the building.

Discreet Modern Design for Private Meditation Chapel in Mexico. If you were to design your perfect spot for relaxation, how would it look like? 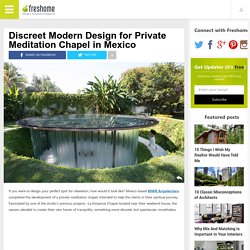 Mexico-based BNKR Arquitectura completed the development of a private meditation chapel, intended to help the clients in their spiritual journey. Fascinated by one of the studio’s previous projects -La Estaancia Chapel-located near their weekend house, the owners decided to create their own haven of tranquility, something more discreet, but spectacular nonetheless. The Ecumenical Chapel was therefore imagined as “a chapel buried, a lump in the ground. And in this process we included a vital element in our lives- Water“, the architects stated.

“After the tour, the chapel welcomes you with a beautiful U-glass entrance, then you get to the central space. Small Place of Meditation: Santa Ana's Chapel in Portugal. Located at the intersection between five streets, the site was the main factor that influenced the architects’ decision when developing the plans for Santa Ana’s Chapel, located in Portugal and designed by e|348 arquitectura: “In the beginning of the year 2009 we were commissioned the Project of a Chapel honoring Santa Ana, in a small, triangular piece of land, in Sousanil, Portugal.

The amphitheater shape of the site, allows exterior mass celebration where everyone has optimal visibility conditions, promoting their participation in the ceremonies. This circumstance was the leading key for the entire project. The building to develop would materialize the edification of the bottom edge of this spontaneous sanctuary, improving the conditions for celebration along with the creation of a singular building capable of housing Santa Ana’s devotion.” 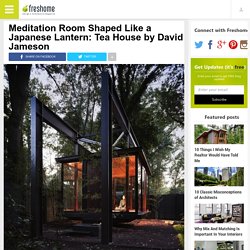 Here is the official project description from the architects: “A hanging bronze and glass object inhabits the backyard of a suburban home. Your Space for Conversation and Meditation: Contemplatorium Love Tree. Contemplatorium Love Tree is an arc-like space that favours conversation and meditation, just like a nook that offers you safety and protection from the outside environment. 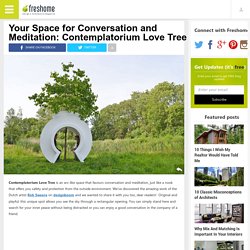 We’ve discovered the amazing work of the Dutch artist Rob Sweere on designboom and we wanted to share it with you too, dear readers! Original and playful, this unique spot allows you see the sky through a rectangular opening. You can simply stand here and search for your inner peace without being distracted or you can enjoy a good conversation in the company of a friend.

Your Space for Conversation and Meditation: Contemplatorium Love Tree. 10 Ways To Create Your Own Meditation Room. Imagine having a room in your home that heals your mind, body and soul? 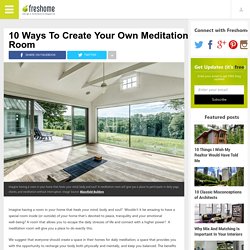 A meditation room will give you a place to participate in daily yoga, chants, and meditation without interruption. Image Source: Blansfield Builders Imagine having a room in your home that heals your mind, body and soul? Wouldn’t it be amazing to have a special room inside (or outside) of your home that’s devoted to peace, tranquility and your emotional well-being? A room that allows you to escape the daily stresses of life and connect with a higher power?

Create a Meditation Space in Your Home - Left Brain Buddha. We create spaces in our homes for the activities that are important to us and sustain us. We have spaces for eating, sleeping, playing, and cooking. We may have spaces for sewing, writing, reading, gardening, painting, or model train building. We often define the rooms of our homes by what we do in them – dining, living, entertaining – or the objects we use in them – beds, TVs, baths. Do we have spaces in our homes to just be? How to Create a Sacred Space for Meditation, Yoga or Me-Time. Want to create a quiet, inspiring space for rituals like meditation or yoga — or just a place in your home that helps you feel more connected to what's meaningful in your life? Creating your own sacred space lets you express your very human need for ongoing spiritual nourishment. Whether it's at home, at work or in some "third space" such as a hotel room when traveling, everyone can benefit from creating places where they intentionally choose what surrounds them.

[photo by Marcello Bonfanti | image source] While not selected as winner (FAR's popular Wall House nabbed that distinction), it's clear to see why the project was nominated in the first place, from the siting and its platonic exterior to the dramatic interior spaces. The plan corroborates the images above, that the pavilion is basically two cubes, tangent to each other on one face and shifted from each other about the distance of the half of one side. Slots and a peeling away of the outer walls create access points to each cube from opposite sides, across a shallow pool.

The timelessness of this rugged landscape and spirituality of its environment called for a ‘noninvasive’ architecture that would acknowledge and take advantage of the strong character of the site rather than challenge it. How Looking At 'Contemplative' Architecture Could Be A Form Of Meditation. A new study out of the Catholic University of America (CUA) suggests that architecture has a measurable effect on the mental states of onlookers. Yes, architects have long been attempting to point out this fact.

Philip Johnson in particular stated that "all architecture is shelter, all great architecture is the design of space that contains, cuddles, exalts, or stimulates the persons in that space. " But now some respected members of the scientific community are in on the game too. La Alhambra. ANDO, Tadao (1941-) :ESPACE DE MEDITATION :LA COLLECTION DES ŒUVRES D'ART DE L'UNESCO. Espace pour la méditation — Architecture du Monde. Introduction. Top 10: Divine Architecture For Meditation. Tudela-Culip Restoration Project by EMF Estudi Martí Franch, Ardévols Associates Consultants. Photo: Pau Ardavol. Sometimes you might be tired of meditating on the corners of Mies' Mineral and Metals Building.

Of thinking deeply about Corbusier's sculptures at Chandigarh, to no avail.