Anger. "It is natural for the immature to harm others. 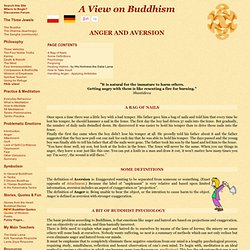 Getting angry with them is like resenting a fire for burning. " Shantideva Once upon a time there was a little boy with a bad temper. His father gave him a bag of nails and told him that every time he lost his temper, he should hammer a nail in the fence. The first day the boy had driven 37 nails into the fence. The definition of Aversion is: Exaggerated wanting to be separated from someone or something. The basic problem according to Buddhism, is that emotions like anger and hatred are based on projections and exaggeration, not on objectivity or wisdom, and thus basically incorrect. As His Holiness the Dalai Lama mentioned: "When reason ends, then anger begins. Is anger or hatred ever justified? "'Righteous hatred' is in the same category as 'righteous cancer'or 'righteous tuberculosis'. And as Khenpo Konchog Gyaltsen Rinpoche mentioned: "Some people feel patience is showing weakness or pessimism.

^Top of Page What forgiveness is. FOOD IS A RIGHT, NOT A PRIVILEGE. Food Police: Bloomberg Bans Home-Cooked Meals for the Homeless Homeless feeding plan goes to vote amid protests Commentary: Rules needed to protect homeless, property owners - March 2, 2012 NOTE- Realated article about sharing meals in Orlando, Florida - June 19, 2011 Houston Food Not Bombs has been sharing healthy vegetarian food with hundreds of hungry people, several nights a week, for over 18 years and is a 2011 Recipient of a Peacemaker Award from the Houston Peace and Justice Center. 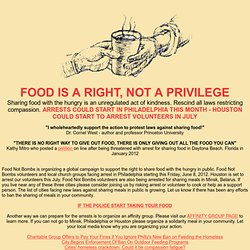 Well funded Houston homeless service organizations, developers, and city officials are promoting new regulations for dozens of groups like ours that provide food for the homeless in Houston every week. Wednesday March 7, at the 9am session, Houston City Council will consider amending chapter 20 of the code of ordinances, imposing five new regulatory and licensing requirements for those who feed hungry people in Houston. We need your help! 3) Call and email your city council members: 45 Quotes on Dreams. By Stephanie Sarkis, Ph.D. Learn about the power of your dreams ... I don't dream at night, I dream all day; I dream for a living. - Steven Spielberg A man is not old until regrets take the place of dreams. - John Barrymore All human beings are also dream beings.

Dreaming ties all mankind together. - Jack Kerouac All men of action are dreamers. - James Huneker All our dreams can come true, if we have the courage to pursue them. - Walt Disney All the things one has forgotten scream for help in dreams. - Elias Canetti. Wisdom from the Dalai Lama to You. The Dalai Lama’s Recommendations for You 1. 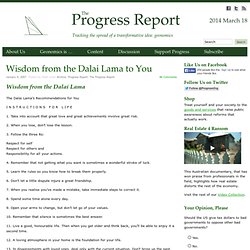 Take into account that great love and great achievements involve great risk. 2. When you lose, don’t lose the lesson. 3. Respect for self Respect for others and Responsibility for all your actions. The Doctrine is Compassion. We can reject everything else: religion, ideology, all received wisdom. But we cannot escape the necessity of love and compassion.... This, then, is my true religion, my simple faith. Religions - Hinduism: Vishnu. Jesus as a reincarnation of Krishna. Free meditations: how to meditate and attain inner peace and freedom. 7 Kundalini Yoga Postures to Clear the Chakras. “Men of great knowledge actually found out about the chakras – their workings, their petals, their sounds, their infinity, their co-relationship, their powers. 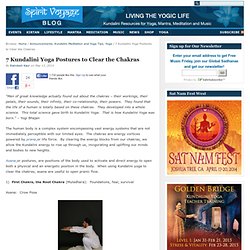 They found that the life of a human is totally based on these chakras. They developed into a whole science. This total science gave birth to Kundalini Yoga. That is how Kundalini Yoga was born.” – Yogi Bhajan The human body is a complex system encompassing vast energy systems that are not immediately perceptible with our limited eyes. Asana,or postures, are positions of the body used to activate and direct energy to open both a physical and an energetic position in the body. 1) First Chakra, the Root Chakra (Muladhara): Foundations, fear, survival Asana: Crow Pose 2) Second Chakra, the Sacral Chakra (Svadisthana): Creation, desire, relationships Asana: Frog Pose Keep the heels together and the fingers on the ground. 3) Third Chakra, the Solar Plexus (Manipura): Will, action Asana: Stretch Pose.

Opening the Chakras. CHAKRA COLORS AND MEANINGS. There are seven main energy centres (chakras) of the body. These chakras are like spirals of energy, each one relating to the others. Using the seven colours of the spectrum, Colour Therapy aims to balance and enhance our body's energy centres/chakras and also to help stimulate our body's own healing process. Colour Therapy uses colour to re-balance the Chakras that have become depleted of energy. Colour therapy can be shown to help on a physical level; however there are deeper issues around the colours on the psychological and spiritual levels.

Colour has a profound effect on us on all levels, physical, mental, emotional and spiritual. Our well being is not purely a physical issue. All life experiences have an affect upon us. The Colours VIOLET/PURPLE governs the CROWN chakra, at the top of the head. Related organ: brain.