Jse_22_2_roney-dougal. Long-term meditators self-induce high-amplitude gamma synchrony during mental practice. Meditation Gives Brain a Charge, Study Finds (washingtonpost.com) Studies of Advanced Stages of Meditation in the Tibetan Buddhist and Vedic Traditions. I: A Comparison of General Changes. Epigenesis: The New Biology – Part II. In our previous blog, comparisons were made between the “old” biology – Darwinism, with its emphasis upon the DNA code inside our cells and where evolution is the result of the population evolving over centuries. 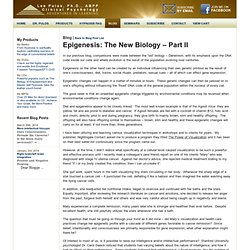 Epigenesis on the other hand can be created by an individual influencing their own genetic printout as the result of one’s consciousness, diet, toxins, social rituals, predators, sexual cues – all of which can effect gene expression. Epigenetic changes can happen in a matter of minutes or hours. These genetic changes can then be passed on to one’s offspring without influencing the “fixed” DNA code of the general population within the nucleus of every cell. The good news is that an unwanted epigenetic change triggered by environmental conditions may be reversed when environmental conditions change again. Diet and epigenetics appear to be closely linked.

I have been utilizing and teaching various visualization techniques in workshops and to clients for years. Dr. Dr. Is meditation the push-up for the brain? Study shows practice may have potential to change brain's physical structure. Evidence builds that meditation strengthens the brain. Earlier evidence out of UCLA suggested that meditating for years thickens the brain (in a good way) and strengthens the connections between brain cells. 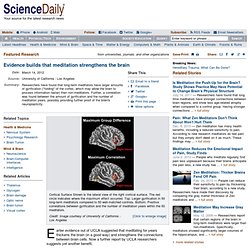 Now a further report by UCLA researchers suggests yet another benefit. Eileen Luders, an assistant professor at the UCLA Laboratory of Neuro Imaging, and colleagues, have found that long-term meditators have larger amounts of gyrification ("folding" of the cortex, which may allow the brain to process information faster) than people who do not meditate. Further, a direct correlation was found between the amount of gyrification and the number of meditation years, possibly providing further proof of the brain's neuroplasticity, or ability to adapt to environmental changes.

The article appears in the online edition of the journal Frontiers in Human Neuroscience. The cerebral cortex is the outermost layer of neural tissue. "The insula has been suggested to function as a hub for autonomic, affective and cognitive integration," said Luders. How Meditation May Change the Brain. Getty Images Over the December holidays, my husband went on a 10-day silent meditation retreat. 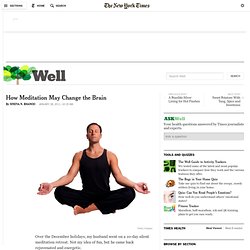 Not my idea of fun, but he came back rejuvenated and energetic. He said the experience was so transformational that he has committed to meditating for two hours daily, one hour in the morning and one in the evening, until the end of March. He’s running an experiment to determine whether and how meditation actually improves the quality of his life. I’ll admit I’m a skeptic. But now, scientists say that meditators like my husband may be benefiting from changes in their brains. M.R.I. brain scans taken before and after the participants’ meditation regimen found increased gray matter in the hippocampus, an area important for learning and memory. But how exactly did these study volunteers, all seeking stress reduction in their lives but new to the practice, meditate?

Of course, it’s important to remember that the human brain is complicated. Ultimately, Dr. The Science of How Meditation Changes Your Brain. What, exactly, is contemplative neuroscience and what relevance, if any, does it have to the study of brain and behavior? 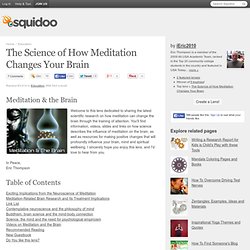 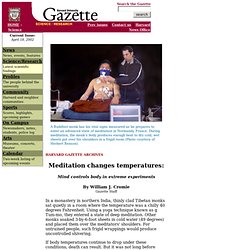 Cromie Gazette Staff In a monastery in northern India, thinly clad Tibetan monks sat quietly in a room where the temperature was a chilly 40 degrees Fahrenheit. Using a yoga technique known as g Tum-mo, they entered a state of deep meditation. Other monks soaked 3-by-6-foot sheets in cold water (49 degrees) and placed them over the meditators' shoulders.

If body temperatures continue to drop under these conditions, death can result. Meditation Can Improve Concentration, Studies Say. The idea that meditation is good for you is certainly not new, but scientists are still trying to figure out exactly why meditating so reliably improves mental and physical health. 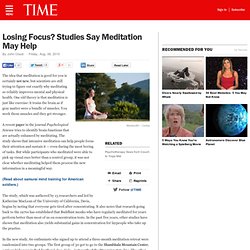 One old theory is that meditation is just like exercise: it trains the brain as if gray matter were a bundle of muscles. You work those muscles and they get stronger. A recent paper in the journal Psychological Science tries to identify brain functions that are actually enhanced by meditating. Zen Meditation Alleviates Pain, Study Finds. Zen meditation – a centuries-old practice that can provide mental, physical and emotional balance – may reduce pain according to Université de Montréal researchers. 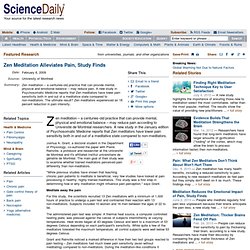 A new study in the January edition of Psychosomatic Medicine reports that Zen meditators have lower pain sensitivity both in and out of a meditative state compared to non-meditators. Joshua A. Grant, a doctoral student in the Department of Physiology, co-authored the paper with Pierre Rainville, a professor and researcher at the Université de Montréal and it's affiliated Institut universitaire de gériatrie de Montréal. The main goal of their study was to examine whether trained meditators perceived pain differently than non-meditators. "While previous studies have shown that teaching chronic pain patients to meditate is beneficial, very few studies have looked at pain processing in healthy, highly trained meditators. Harvard Study finds that Meditation Impacts DNA. A Harvard University study published in 2008 found the first compelling evidence that the Relaxation Response (RR) – the physiological response to meditation, yoga, tai chi, Qi Gong or repetitive prayer – positively affects DNA. 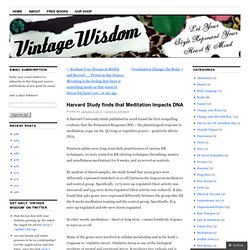 Nineteen adults were long-term daily practitioners of various RR techniques, 20 were trained in RR eliciting techniques (breathing, mantra and mindfulness meditation) for 8 weeks, and 19 served as controls. By analysis of blood samples, the study found that 2209 genes were differently expressed (switched on or off) between the long-term meditators and control group. Specifically, 1275 were up-regulated (their activity was increased) and 934 were down-regulated (their activity was reduced). Meditation May Fine-tune Control Over Attention. Everyday experience and psychology research both indicate that paying close attention to one thing can keep you from noticing something else. 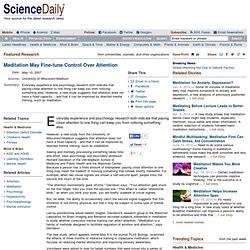