I Don’t Want You to Be My Everything. Why You Need To Abandon Your Rescue Fantasy. Aug 22, 2010 (Note: This post was first published in June 2009 – but my Spidey Sense is telling me to send it out again because people need to hear it.) 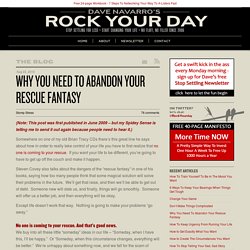 Somewhere on one of my old Brian Tracy CDs there’s this great line he says about how in order to really take control of your life you have to first realize that no one is coming to your rescue. If you want your life to be different, you’re going to have to get up off the couch and make it happen.

Mental Health. Active Listening & Support. 10 Forgiveness Tools (to help you let go of anger at your ex and yourself) Originally an article on Oprah.com. 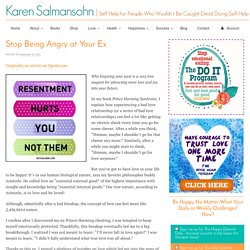 The Dangers of Self-Forgiveness—And How to Avoid Them. Why I'm Setting Myself Back In My Career In Favor Of A Happier Life. A few weeks ago, you probably saw the Cosmopolitan post, “Why I Gave Up a $95,000 Job to Move to an Island and Scoop Ice Cream.” 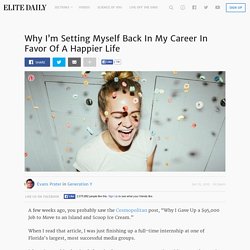 When I read that article, I was just finishing up a full-time internship at one of Florida’s largest, most successful media groups. The Phenomenon & Meaning of 11:11: The Twin Flame Connection. I have always noticed repetitive number sequences that the universe presents to me. 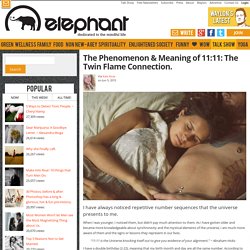 When I was younger, I noticed them, but didn’t pay much attention to them. Forgiveness. The Real Reason You Can't Stop Hating Your Ex. Photos du journal - Humans of New York. Official Site - Spiritual Teachings and Tools For Personal Growth and Happiness. Kimchi Cuddles - COMICS - SEASON 3. The 3 steps to profound healing (of your broken heart, bones, spirit) ~ Ben Ralston. “He who saves one man saves mankind” I bleed. 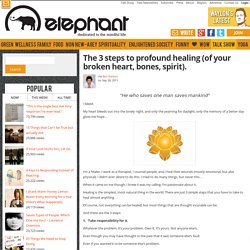 My heart bleeds out into the lonely night, and only the yearning for daylight; only the memory of a better day gives me hope… I’m a healer. I work as a therapist, I counsel people, and I heal their wounds (mostly emotional, but also physical). I didn’t ever desire to do this. When it came on me though, I knew it was my calling. Healing is the simplest, most natural thing in the world. Login - FetLife. David-brooks-the-moral-bucket-list. Top 10 Highly-Desired Skills You Can Teach Yourself. Exercises - Lesson 15 - Tarot Card Pairs. (See Introduction to Exercises.) 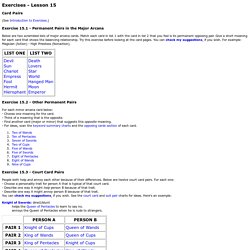 Exercise 15.1 - Permanent Pairs in the Major Arcana Below are two scrambled lists of major arcana cards. Match each card in list 1 with the card in list 2 that you feel is its permanent opposing pair. Give a short meaning for each card that shows the balancing relationship. Try this exercise before looking at the card pages. Exercise 15.2 - Other Permanent Pairs For each minor arcana card below: - Choose one meaning for the card. - Think of a meaning that is the opposite. - Find another card (major or minor) that suggests this opposite meaning. - For ideas, scan the keyword summary charts and the opposing cards section of each card. Exercise 15.3 - Court Card Pairs. 5 Step Emotional Clearing Process.

18 Struggles Of Having An Outgoing Personality But Actually Being Shy And Introverted. This… this is my soul song, people. 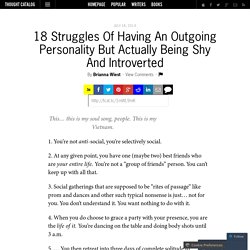 This is my Vietnam. 1. You’re not anti-social, you’re selectively social. Significators » The Lotus Pond. When doing a reading, some Tarot readers like to choose and set aside a card to represent the Querent (the person they are reading for). 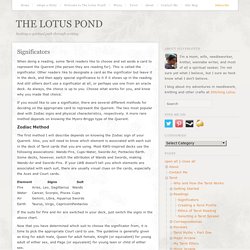 This is called the significator. Other readers like to designate a card as the significator but leave it in the deck, and then apply special significance to it if it shows up in the reading. Lesser banishing ritual of the pentagram. The Lesser Banishing Ritual of the Pentagram (or LBRP) is a ceremonial magic ritual devised and used by the original order of the Golden Dawn that has become a mainstay in modern occultism. 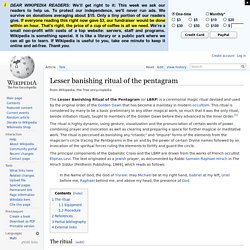 This ritual is considered by many to be a basic preliminary to any other magical work, so much that it was the only ritual, beside initiation rituals, taught to members of the Golden Dawn before they advanced to the Inner Order.[1] The ritual is highly dynamic, using gesture, visualization and the pronunciation of certain words of power, combining prayer and invocation as well as clearing and preparing a space for further magical or meditative work.

The ritual is perceived as banishing any "chaotic" and "impure" forms of the elements from the magician's circle tracing the Pentagrams in the air and by the power of certain Divine names followed by an invocation of the spiritual forces ruling the elements to fortify and guard the circle. The ritual[edit] Equipment[edit] Procedure[edit] References[edit] How to Spot Psychic Scams & Spellcaster Frauds. I was 17 when I got my first storefront psychic reading. 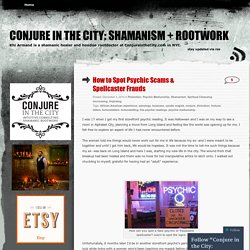 It was Halloween and I was on my way to see a room in Alphabet City, planning a move from Long Island and feeling like the world was opening up for me. Jaden and Willow Smith on Prana Energy, Time and Why School is Overrated. Photo One of the gifts of being young is that particular blend of self-confidence and self-consciousness. Jaden and Willow Smith have managed to turn this form of heady teenage introspection into expression instead of ennui.

Willow, the 14-year-old musician whose debut single, “Whip My Hair,” went platinum when she was not yet a teenager, explains that the gift of life is “looking at nature and being, like, ‘Wow, I am so lucky to have a body and to breathe and to be able to look at this.’ ” To which her older brother Jaden, a 16-year-old actor and musician, adds: “And the huge, terrible thing the world would be missing by not expressing yourself.” To that end, both Jaden and Willow, the children of Jada Pinkett Smith and Will Smith, released new albums this month, including two tracks by Jaden that make their public debut here. 15 Things You Don’t Owe Anyone At All (Though You Think You Do) Many choices we make in life—ranging from what we do, to how we conduct ourselves, and who we interact with—are subject to prying questions and commentary from those around us.

Family members, friends, and even total strangers, it often seems like everyone has an opinion on the things we do, no matter how small or insignificant those things might seem to us. Sometimes people go so far as to ask you to explain yourself for the decisions or choices you make in your own life. 18 Things Highly Creative People Do Differently. Creativity works in mysterious and often paradoxical ways. Creative thinking is a stable, defining characteristic in some personalities, but it may also change based on situation and context. Inspiration and ideas often arise seemingly out of nowhere and then fail to show up when we most need them, and creative thinking requires complex cognition yet is completely distinct from the thinking process.

Neuroscience paints a complicated picture of creativity. As scientists now understand it, creativity is far more complex than the right-left brain distinction would have us think (the theory being that left brain = rational and analytical, right brain = creative and emotional). In fact, creativity is thought to involve a number of cognitive processes, neural pathways and emotions, and we still don’t have the full picture of how the imaginative mind works. While there’s no “typical” creative type, there are some tell-tale characteristics and behaviors of highly creative people. 10 Ways to Show Love to Someone With Depression. How to Get Up Right Away When Your Alarm Goes Off. When your alarm wakes you up in the morning, is it hard for you to get up right away? Stop Doing It All Yourself: How to Delegate When You’re Overwhelmed. Why You Need To Differentiate Between What You Want And What You Need. 20 Things That Mentally Strong People Don't Do.

One study, published in May 2013, actually found that practitioners of BDSM were better off than the general population in some ways, including having secure relationships and lower anxiety. The story behind the Band-Aids. Yoga Meditation: Witnessing Your Thoughts. Witnessing Your Thoughts in Yoga Practice by Swami Jnaneshvara Bharati SwamiJ.com Witnessing the flow of mind: Witnessing your thoughts is a most important aspect of Yoga practice. Yoga Meditation: Mind. This site is devoted to presenting the ancient Self-Realization path of the Tradition of the Himalayan masters in simple, understandable and beneficial ways, while not compromising quality or depth. The goal of our sadhana or practices is the highest Joy that comes from the Realization in direct experience of the center of consciousness, the Self, the Atman or Purusha, which is one and the same with the Absolute Reality.

Identify Askers and Guessers to Request Favors More Effectively. A Better Way to Say Sorry. March 30, 2014. Questions that help open up. Thoughts on inviting discrimination. 5 Myths About Introverts and Extraverts at Work. 4 Manifestation Myths Busted  Why rejection hurts so much — and what to do about it. The World's Most Unusual Therapist - Soulvana blog. Se connecter à Facebook. Chris Fleury - Téléchargements mobiles. WTF: The Hungry Ghost of Venus Retrograde. How Kindness Became Our Forbidden Pleasure. Suicide: What to do when someone is suicidal. Empathy-is-actually-a-choice.

Related:  Top 10 Highly-Desired Skills You Can Teach Yourself   -  How to Get Up Right Away When Your Alarm Goes Off   -  Education   -  Enterprise