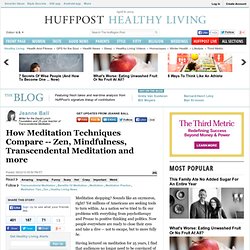 Sounds like an oxymoron, right? Yet millions of Americans are seeking tools to turn within. As a nation we've tried to fix our problems with everything from psychotherapy and Prozac to positive thinking and politics. Now people everywhere are ready to close their eyes and take a dive -- not to escape, but to more fully be. Having lectured on meditation for 25 years, I find that audiences no longer need to be convinced of meditation's practical benefits. Experts in the venerated traditions of meditation have always marveled at the mind's subtlety, appreciating its keen responsiveness and sensitivity to different mental procedures. The Myth of the Relaxation Response. The Daily Habit Of These Outrageously Successful People. "Meditation more than anything in my life was the biggest ingredient of whatever success I've had. 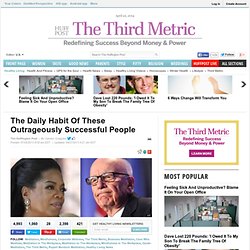 " That's what Ray Dalio, the billionaire founder of Bridgewater Associates -- the world's largest hedge fund firm -- explained in 2012. Dalio is in good company. More and more leaders in the corporate world have been taking note of the benefits of meditation, which include lower stress levels, improved cognitive functioning, creative thinking and productivity, and even improved physical health. A number of Fortune 500 companies, including Google, AOL, Apple and Aetna, offer meditation and mindfulness classes for employees -- and the top executives of many major corporations say that meditation has made them better leaders. Ford Motor Company chairman Bill Ford and former Google.org director Larry Brilliant are also among the executives advocating the mindfulness practice. Lo que podemos lograr con conciencia plena (mindfulness): Hedy Kober at TEDxRiodelaPlata. 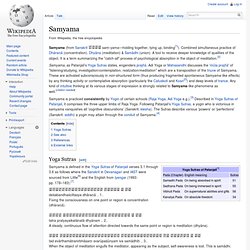 Combined simultaneous practice of Dhāraṇā (concentration), Dhyāna (meditation) & Samādhi (union). A tool to receive deeper knowledge of qualities of the object. It is a term summarizing the "catch-all" process of psychological absorption in the object of meditation.[2] Yoga Sutras[edit] Samyama is defined in the Yoga Sutras of Patanjali verses 3.1 through 3.6 as follows where the Sanskrit in Devanagari and IAST were sourced from Little[6] and the English from Iyengar (1993: pp. 178–183):[7] देशबन्धश्चित्तस्य धारणा ॥ 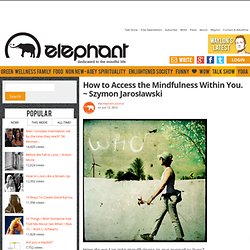 The modern life burdens us with the shackles of stability and predictability. We’ve been heading in this direction since the Industrial Revolution gave us the mass-produced clock. Or maybe it was the omnipresent clock that gave us the work efficiency which enabled the Revolution. Regardless, each of our weekdays starts at the same hour. The temperature and brightness in our office remain constant during the day. So we plug ourselves into the Internet. Spam. But it only gets more stale. Life has become smoother, more convenient and connected.

Whether we resort to the Internet or television, our satisfaction is only momentary, yet the hunger we are trying to feed is perennial. Yoga and Buddhist traditions propose various means to break this vicious cycle. Meditation Beats Anxiety By Activating Certain Brain Regions, Study Finds. Mindfulness meditation -- nonjudgmental awareness of thoughts and emotions -- is known for its anxiety-busting powers, and now scientists are getting a better understanding of why it has this impact in the brain. 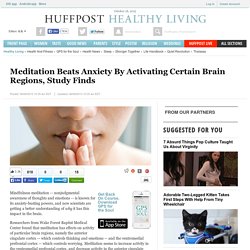 Researchers from Wake Forest Baptist Medical Center found that meditation has effects on activity of particular brain regions, namely the anterior cingulate cortex -- which controls thinking and emotions -- and the ventromedial prefrontal cortex -- which controls worrying. Meditation seems to increase activity in the ventromedial prefrontal cortex, and decrease activity in the anterior cingulate cortex. "Mindfulness is premised on sustaining attention in the present moment and controlling the way we react to daily thoughts and feelings," study researcher Fadel Zeidan, Ph.D., a postdoctoral research fellow in neurobiology and anatomy at the medical center, said in a statement. For more ways mindfulness and meditation can benefit your brain and body, click through the slideshow:

4 scientific studies on how meditation can affect your heart and brain. Many people have tried to sell me on the idea of meditating. 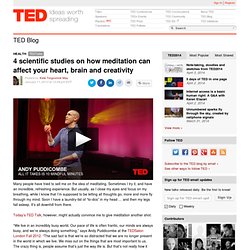 Sometimes I try it, and have an incredible, refreshing experience. But usually, as I close my eyes and focus on my breathing, while I know that I’m supposed to be letting all thoughts go, more and more fly through my mind. Soon I have a laundry-list of “to-dos” in my head … and then my legs fall asleep. It’s all downhill from there. Today’s TED Talk, however, might actually convince me to give meditation another shot. “We live in an incredibly busy world. In this talk, Puddicombe — who is as equally as turned off by incense as me — shares the fascinating story of how he become a monk, and gives a convincing argument for why it is worth it to take 10 minutes a day to refresh the mind. “Most people assume that meditation is all about stopping thoughts, getting rid of emotions, somehow controlling the mind, but actually it’s much different than that,” says Puddicombe.