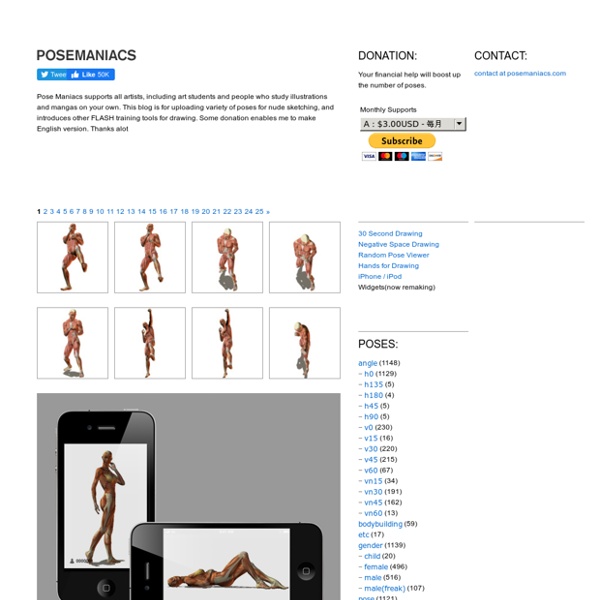 Clever and Creative Bench Advertisements Creative uses of benches in advertising campaigns by various companies. Becherovka “Get Closer” Bench Becherovka is a traditional Czech liquor enjoyed my men and women. Long-term commucation stategy of Becherovka is captured is a slogan: Get closes. That’s why our Becherovka bench is specially designed to help people do just that.

tortillion.htm How To Make A Tortillion A tortillion is nothing more than a piece of rolled paper used as a blending tool. Create a Pencil Drawing of a Face In this demo, I create a charcoal pencil drawing a face. If you haven't drawn a face successfully already, you may want to brush up on basics of drawing a human head before working through this page. I always say that knowing how the human head is structured sets you more at ease when drawing people. Space Helmet: It Ain't What it Seams I have now cut and stitched together the four main parts of the helmet, and then shaped the wet leather over the yard sale plastic original. The toy astronaut helmet serves not only as a pattern source, but also as a shaping form. It reminds me of the underwater helmets worn by the crew of the Nautilus, with its roundedness. At the end of yesterday's blog I decided that the plain exposed seam I had tried (and was planning for the entire helmet) wasn't the best choice, so I ripped out the one seam that I had done, and restitched it. I replaced the side seams with overlapping seams, and for the center seam I chose a butt seam (since an overlapping seam has to favor one side or the other, and won't be symmetrical).

Artistic Anatomy Is learning to draw anatomy in a classroom more secure (since there is a teacher to check the work and possibly a book to study from) in practicing artistic anatomy drawing, or should artists focus on just practicing from images on websites/blogs like this tumblr? Asketh - pjmx24 Depending on the size of your class and where you are, your teacher can be a great guide to help you and show you what areas you need to focus on more to improve and give you good material to work from! If your class size is too big (ideally a class of no more than 15 is optimal for a teacher to give extensive feedback to all students) you might not get enough feedback to really improve as much as possible to your full potential. Discovering the art of animated logos with Adobe After Effects CC Depending on the logo design you're starting with, you'll need to first determine why you want to animate it and what story you want it to tell. Where will this animation be used? Will it be an animated avatar for a company's online presence or website? Are you creating an animated title for a video production? Or is it for a product or service business?

Lackadaisy Expressions Boy, I didn't know what I was getting myself into when I started this. I've had requests for some sort of expressions tutorial dating back a while now, so I figured, "Sure! I can explain expression drawing...and it'll be way better than all those tutorials out there that are nothing but charts of generic expressions. Yeah! Just give me a day or two to whip something up..." Gustav Courbet : History of Erotic Art Gustav Klimt (1862 - 1918) was an Austrian artist from Vienna who was one of the pioneers of Symbolism and Art Nouveau who is best known for his paintings though was also an incredibly prolific draftsman. "All art is erotic" — Gustav Klimt We usually use self portraits of the artists on ErotiCart, however Klimt famously has no self portrait and is popularly quoted saying "I have never painted a self-portrait. I am less interested in myself as a subject for a painting than I am in other people, above all women...There is nothing special about me. I am a painter who paints day after day from morning to night...Who ever wants to know something about me... ought to look carefully at my pictures." Gustav Klimt was one of the founding members of the Vienna Secession, a group of Austrian artists who had resigned from the Association of Austrian Artists in protest of their restrictive attitudes towards art.

TENORI-ON The interface with light and sound. Media artist Toshio Iwai and Yamaha have collaborated to design a new digital musical instrument for the 21st century, TENORI-ON. A 16x16 matrix of LED switches allows everyone to play music intuitively, creating a "visible music" interface. Features The TNR-W (TENORI-ON White LED) is equipped with white-emitting LEDs on both sides, making it perfect for performing in front of an audience in a live setting. This model features a strong, solid magnesium frame. Virtual Lighting Studio - Interactive portrait lighting The ambient light represents the light coming from the studio environment. You can turn it on or off and change its color and intensity. If you're lost and need some help, click here. But you probably know that...

The Evolution Of Icon Design From 1981-2013 December 4, 2013 • By Joe Howard • In Design With the GUI having now been around for over 40 years, today we are taking a look back in time at the evolution of an integral feature – the icon. Since the early 70’s, when bitmapped screens were first developed with GUI’s, the humble icon has come a long way. Disney's "Tangled" Character Design Development. Once "Rapunzel", then "Rapunzel Unbraided", and now "Tangled", Disney's 50th animated Feature film, set for release November 28th, has gone through many changes throughout it's years in development. One thing that hasn't changed much, though, is the artistic influence of two artists in particular. One was the French Rococo painter Jean-Honorer Fragonard, specifically one of his best known works; “The Swing” which inspired the lush fairy tale world that Rapunzel inhabits. The second is animation legend Glen Keane, who was the original driving force behind the film. Glen's masterfully solid, appealing, expressive and passionate animation and drawings are admired across the globe. He is currently being honored with a gallery exhibit in Paris and is touring with a retrospective of Disney Art in Australia.

Stan Prokopenkos Blog - StumbleUpon For a video version of this tutorial visit www.proko.com/how-to-draw-eyes-structure This tutorial is a continuation of How to Draw the Head from Any Angle. I will go over the structure of the eye and detailed information on drawing the brow ridge, eyeball, eyelids, eyelashes, iris, cornea, and pupil. The Basic Forms The Eyeball