Amy Cuddy: Your body language may shape who you are 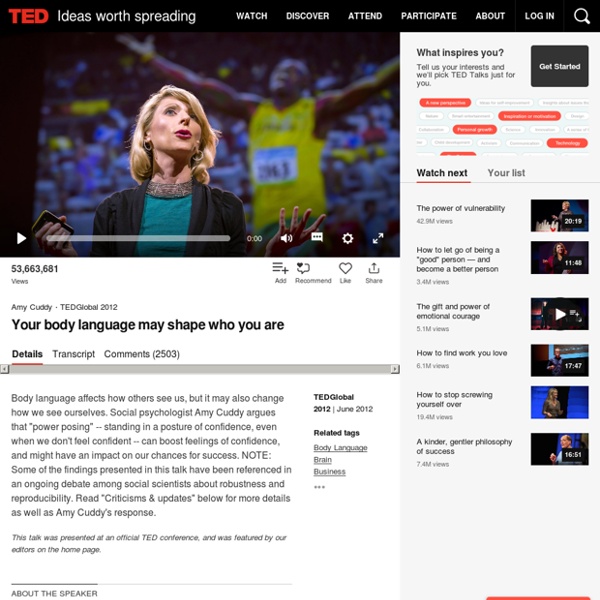 Amy Cuddy Amy Joy Casselberry Cuddy (born 1972)[1] is an American social psychologist, author and speaker. She became widely known for her 2012 TED talk, where she presented her research on the phenomenon of "power posing",[2][3] a theory later criticized by several researchers.[4][5] Cuddy has also done work on stereotyping and discrimination, emotions, nonverbal behavior, and the effects of social stimuli on hormone levels.[4][6] Early life and education[edit]

Future - Is crying truly cathartic? When Theresa May announced in Downing Street that she would be standing down as British Prime Minister, it was her visible struggle to hold back tears that most captured the world’s headlines. Commentators were quick to observe that this emotional display had finally humanised a politician widely seen as remote and aloof. Others – even some of May’s critics – admitted to experiencing a jolt of sympathy. It would appear that welling up in front of the cameras has had a largely positive impact on May’s reputation (though certainly not exclusively so). This response to such a public display of emotion may or may not come as a shock to you, depending on your own personal beliefs about crying – but, according to a group of psychologists at the University of Queensland, these beliefs may in turn shape your own crying tendencies and experiences.

Using Scrum in the Classroom As we shift many of our educational practices towards more inquiry focused learning, we must also shift the skills that we focus on in our classrooms. In many of my classes, I have students engage in long term learning experiences that emphasize important skills including communication and collaboration. One issue I have consistently come across, however, is that students often lack the project management skills required to be successful in this type of learning and that we often launch them into assignments that require planning both their task and their time without providing them with the tools the need to be successful. How many times have we given students “a work block” and set them free only to be frustrated by how poorly many of them use their time? One of the classes I teach is AP Capstone Seminar. In this class, as part of their AP exam score, students are placed in teams where they have to collaboratively produce a problem/solution style research presentation.

Future - Are there alternatives to air conditioning? At first sight, the view could be mistaken for the rolling hummocks of Hobbiton, right down to the perfectly circular doors opening out of the lush green hillside. But the doors are made of glass, and inside them are not cosy hobbit holes but an array of large mechanical steel arms and levers holding some of the doors ajar. These hills are part of the roof of the California Academy of Sciences in San Francisco, US. The undulating green roof is one of a series of engineering and design features that make the academy one of the largest passively ventilated spaces in the US. This means that even in the peak of summer, the bulk of this building relies on clever manipulation of the elements to stay cool, with next to no air conditioning.

Idries Shah Idries Shah (/ˈɪdrɪs ˈʃɑː/; Pashto: ادريس شاه‎, Urdu: ادریس شاه‬‎; 16 June 1924 – 23 November 1996), also known as Idris Shah, né Sayed Idries el-Hashimi (Arabic: سيد إدريس هاشمي) and by the pen name Arkon Daraul, was an author and teacher in the Sufi tradition who wrote over three dozen books on topics ranging from psychology and spirituality to travelogues and culture studies. In his writings, Shah presented Sufism as a universal form of wisdom that predated Islam. Emphasizing that Sufism was not static but always adapted itself to the current time, place and people, he framed his teaching in Western psychological terms. Shah made extensive use of traditional teaching stories and parables, texts that contained multiple layers of meaning designed to trigger insight and self-reflection in the reader.

Why should schools prioritise ATL? - Tracker Apps By Lance G King First and most importantly we need to get very clear about purpose. What is the purpose of an ATL skills programme? To me there is only one purpose of ATL – to improve student learning. To improve student performance in every possible way because the essence of any school is learning and we are aiming through ATL to improve learning performance across the board, in all subject, skill and disposition areas. We do this through helping students to develop proficiency in a full array of “21st C” thinking and learning skills and giving them opportunities to apply those skills to all their school subjects and in all other aspects of their lives.

QuantifiedSelf Posts Tagged ‘QuantifiedSelf’ Discussion of PHRs and Patient Data Access on iHealthbeat January 29, 2012 In an new story on iHealthbeat, Barriers Continue To Limit Patient Access to Electronic Health Data, I am quoted on the topic Basically, I continue to be disappointed on the slow adoption of PHRs and the fact that Google Health is now gone. My statement at the end of the article is the most significant – how can providers strategically use PHRs as chronic disease management tools? 21 Things Every 21st Century Educator Should Try in 2019 In 2014 I wrote the original “21 Things” post with the hope that an educator reading it would be inspired to try one or two new things in their classroom. While the post has evolved over time, that continues to be the main driving factor behind this. As trends and technology change often, it’s important to keep evolving and growing as learners and educators as well. Before I present you with the updated 2019 version of the list, a few disclaimers: I know that this is an ambitious list.

4 healthcare trends hospital execs can't ignore by Kent Bottles Hospital leaders are busy trying to cope with the changes brought on by the Patient Protection and Affordable Care Act and the realization that the federal budget deficit translates into less money for all healthcare providers in the future. The seemingly inevitable transition from fee-for-service to global payments creates anxiety about how quickly the financial incentives will shift. While the above-described issues are certainly enough to monopolize any busy hospital executive's time, there are other large-scale changes on the horizon that may impact hospital operations just as much.

Relationships Matter More Than Rules But after sharing rules and expectations, how about transitioning into sharing a few slides and artifacts that tell students about you? There’s general information you can share (details about your family, where you went to school, jobs you had before teaching, etc.), but you can add a few more vulnerable glances into your life: What struggles did you have growing up? AI Experts On Robots and Living with Thinking Machines On Saturday June 4, 2011 I took a Megabus from Philadelphia (one-way fare $8.00) to Hunter College in New York City to attend Man-Made Minds: Living With Thinking Machines, a World Science Festival program. Rodney Brooks, who until recently was Panasonic Professor of Robotics at MIT and who now is Chief Technology Officer at Heartland Robotics, was the first expert to speak, and he emphasized a very practical approach that was not too concerned with any negative consequences of living with thinking machines. Brooks comes across as the typical, can do engineer who wants to revitalize American manufacturing by providing workers with robotic tools. For Brooks everything from ant behavior to robot behavior to human behavior comes down to simple rules and computation. I thought he did a nice job of explaining the concept of the “uncanny valley.”

All About Me Bags On the first day I share items that tell the class something about me. I put 5 items in a lunch bag and pull one out at a time, sharing a little bit about myself. I have a photo of my dog, a poem that I wrote, and then some other fun items. My student teacher also shared items this way. So I send students home with a bag and instructions and they come back with their bags filled with 5 items that tell something about themselves. During the next few days, we share a few here and there throughout the day.

How robots will replace doctors Farhad Manjoo has a provocative thesis on the future of medicine: Robots will take the jobs. And not just the bottom-rung of jobs. “The doctors who are the juiciest targets for automation might not be the ones you’d expect,” he writes.