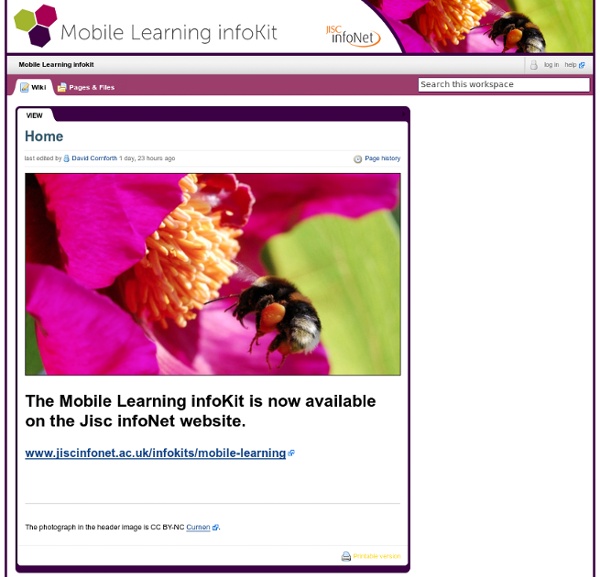 5 Awesome Things You Can Do With an IPad and an LCD Projector Pho.to - online photo editor, fun effects and tools, free software The "Big Five" IT trends of the next half decade: Mobile, social, cloud, consumerization, and big data "Much or most of these topics are in back burner mode in many companies just now seeing the glimmerings of recovery from the downturn. Much has been written lately about the speed at which technology is reshaping the business landscape today. Except that's not quite phrasing it correctly. As a result, there's a rapidly expanding gap between what the technology world is executing on and what the enterprise can deliver. At the end of the day, businesses must be able to effectively serve the markets they cater to, and doing so means using the same channels and techniques as their trading partners and customers. A tectonic technology shift One only need look at what's on the mind of CIOs these days (60% believe they should be directly driving growth and productivity) versus what they're well known for delivering on. "Easy", highly mobile, and "social" are the mantras of this new generation of IT. But this is not a blame game. Where does technology and IT go from here? Key adoption insight

6 Best Practices for Universities Embracing Social Media The Digital Marketing Series is supported by HubSpot, an inbound marketing software company based in Cambridge, Mass., that makes a full platform of marketing software, including social media management tools. For universities, deciding to use social media is a no-brainer. The 18- to 24-year-old college student demographic is all over the social web, and its younger counterpart (the high school crowd) is equally immersed. Alumni, recent and far-removed, use social networks to engage and stay connected with the world. Community members, parents of students, potential donors, faculty and staff and other constituents are just a tweet or "like" away. With so many key populations embracing social media, universities almost have no choice but to integrate these platforms into their marketing and communications plans. [More from Mashable: 20+ Essential Resources for Improving Your SEO Skills] Already, many schools have leveraged social media in a big way. 1. Define your goals, as well. 2. 3. 4.

What do you want to know? Grand Valley started this week. And, as usual, I began my Introduction to Learning and Assessment course with a workshop called "A Piece of Me" (handout). This involves an activity that was introduced to me over 14 years ago during an Integrated Thematic Instruction class. Activity: Asking and Recording Questions I begin this portion by saying something like, "I reserve the right to decline answering any question. We then move on to the groups asking their questions. Reflection: Looking Back - Small Group Analysis From your list of questions, pick one that you think was an effective question. I end the workshop by getting some feedback from the participants. I follow this workshop up with a home workshop where they apply the same strategy of asking questions to reading the course syllabus (handout). Now it is your turn.

Digital textbooks open a new chapter South Korea, one of the world's highest-rated education systems, aims to consolidate its position by digitising its entire curriculum. By 2015, it wants to be able to deliver all its curriculum materials in a digital form through computers. The information that would once have been in paper textbooks will be delivered on screen. South Korea's Minister of Education, Science and Technology, Ju-Ho Lee, said that his department was preparing a promotion strategy for "Smart Education", focusing on customised learning and teaching. The project, launched during the summer, will involve wireless networks in all schools to allow students to learn "whenever and wherever", as well as an education information system that can run in a variety of devices including PCs, laptops, tablets and internet-connected TVs. He said the government would support an open content market containing a variety of learning materials, aimed at keeping up quality while keeping down costs. Tech-friendly teenagers Teaching gap

A few simple tools I want edu-startups to build Outside of taking courses in XML, programming logic, and Python, I am not a programmer. I understand the importance of being able to program. I can get by with HTML and CSS. There are few things more irritating, however, than having ideas that one is not capable of activating in a meaningful way. Here are a few tools that I would like someone, somewhere to build (startups, research labs, competent coders): 1. 2. 3. gRSShopper. Technology: More than a tool, a new skill by corykrug I’m dumping another technology phrase that I think its time has passed by. A few years ago I stopped using the phrase 21st Century blah, blah, blah. You name it we were calling everything 21st Century. I haven’t missed that phrase in my vocabulary as I believe it is just the way things should be now that we’re 11 years into it. Technology is just a tool I have heard this said way too often-to the point, I believe, that some educators are using it to hide behind when it comes to using technology in their classrooms. Is Technology a tool? Is it JUST a tool? Technology is a Skill The more I’ve been rolling this notion over in my head the past couple of days the more sense this makes to me. The problem is you need to have the skills to use a tool before you can use it propertly and have it effect your life in positive ways. A car is a tool, it gets us from point A to point B. A pencil is just a tool, but until you learn the skill to hold it correctly it doesn’t do you much good.

txtDrop.com - Completely Free Text Messaging Research: Video games help with creativity in boys and girls By Mike Snider, USA TODAY Updated 2011-11-02 12:53 PM James Rabideau plays a video game as he waits in line at the Sony booth to get a chance to play the new Playstation Vita at the E3 video game convention in L.A. in June 2011. By Robert Hanashiro, USA TODAY Here's another reason to include The Legend of Zelda: Skyward Sword on those holiday shopping lists: children who play video games are more creative. That finding, thought to be the first demonstration of a relationship between technology use and creativity, comes from a new study of nearly 500 12-year-olds in Michigan, conducted by researchers at Michigan State University's Children and Technology Project. The children were given creative thinking tests – shown a drawing and asked to expand on it or comment on what it means – and then asked about their use of cellphones, computers, the Internet and video games. Other information technologies do have benefits beyond entertainment, however. See photos of: Madden NFL

5 Ways Higher Education Is Leveraging Mobile Tech Jeff Kirchick is Director of Universities at SCVNGR, the popular mobile game about going places, doing challenges and earning points. He presents regularly about the future of mobile and location-based services in education. You can follow Jeff on Twitter @JeffreyKirchick or e-mail him at jeff@scvngr.com. Mobile technology is on the minds of higher education professionals more than ever before. It’s no mystery why: The latest numbers show 40% of teens plan on buying an iPhone within the next three months. There's a recent debate about whether schools should create mobile apps or mobile websites. To be fair, universities have come a long way. As tomorrow’s grads become increasingly married to their mobile devices, here are five ways that mobile tech matters just as much as social technology in the higher ed space. 1. Students today seem unable to go five minutes without checking their phones for a text, notification or email. (88% of students even text during class!) 2. 3. 4. 5.

Using Social Networking to Build 21st Century Skills - Finding Common Ground "Good people know that high stakes testing has limited value and they keep operating anyway. They don't let testing get in the way of doing the good work they want to do to get kids prepared for life." Todd Whitaker In education we have a habit of using terms so often that we push staff to a place where they do not want to use them anymore, which means they are in jeopardy of not being engaged in the process. The tendency to dislike a term after it is used too often happens because many educators are concerned that it's merely a new twist on an old idea. The race to nowhere is paved in countless mandates and new ideas. However, are they really new ideas? In addition, one of the best 21st century skills that we can teach students is the art of reflection. Social Network Generation As adults, we grew up in a time when we had to work as a team, think critically and communicate with others, at the same time that we were all being creative. Great conversations force us to think deeper.