Millennials will benefit and suffer due to their hyperconnected lives 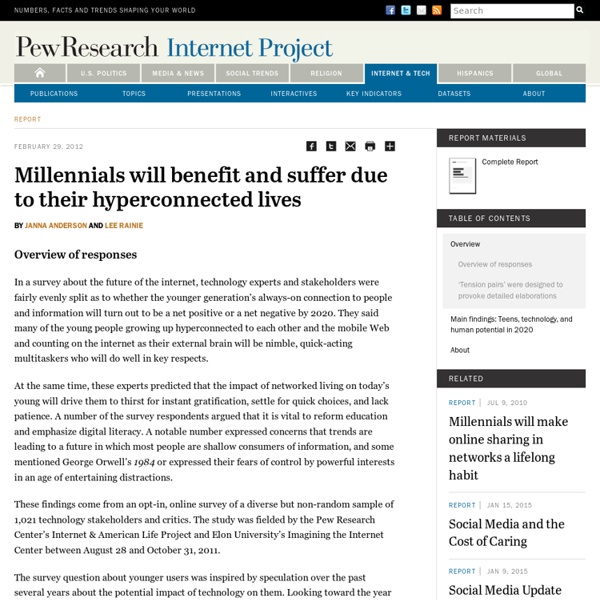 Overview of responses In a survey about the future of the internet, technology experts and stakeholders were fairly evenly split as to whether the younger generation’s always-on connection to people and information will turn out to be a net positive or a net negative by 2020. They said many of the young people growing up hyperconnected to each other and the mobile Web and counting on the internet as their external brain will be nimble, quick-acting multitaskers who will do well in key respects. At the same time, these experts predicted that the impact of networked living on today’s young will drive them to thirst for instant gratification, settle for quick choices, and lack patience. A number of the survey respondents argued that it is vital to reform education and emphasize digital literacy. These findings come from an opt-in, online survey of a diverse but non-random sample of 1,021 technology stakeholders and critics. Here is a sampling of their predictions and arguments:

Classroom Laptop Users Distract Others As Well As Themselves Thursday, April 25, 2013 It won’t surprise anyone to learn that having a laptop computer open in a lecture class is an invitation to distraction for the user. But what about the students sitting nearby? A new study by a group of researchers at McMaster and York universities, both in Canada, finds evidence that laptop use in college classrooms distracts not just laptop owners, but their classmates as well. The researchers begin their article, published last month in the journal Computers & Education, by reviewing what we know about learning while our attention is divided:

The Fear Factor One of us: Microsoft anthropologist Danah Boyd gives a lecture in Australia on teenage Internet behavior. Are young people different because of technology? Microsoft senior researcher Danah Boyd says not so much. Adults worry about what young people get up to on the Internet, but Boyd says what happens there is no more than the usual coming-of-age stories about socializing, sex, experimentation—only now those stories are being written on the Web. Social media can give people a fear of missing out It has been called FOMO, or the fear of missing out. Back in the day, people could just watch TV and get all of the information they needed for any given moment, but today, social media gives people many mediums to get information and find out what's going on at any time. This creates a problem for some people, as this wealth of knowing of what others are doing all the time, can be overwhelming and can make them feel like they're missing out on something.

How Does Multitasking Change the Way Kids Learn? Using tech tools that students are familiar with and already enjoy using is attractive to educators, but getting students focused on the project at hand might be more difficult because of it. Living rooms, dens, kitchens, even bedrooms: Investigators followed students into the spaces where homework gets done. Pens poised over their “study observation forms,” the observers watched intently as the students—in middle school, high school, and college, 263 in all—opened their books and turned on their computers. For a quarter of an hour, the investigators from the lab of Larry Rosen, a psychology professor at California State University-Dominguez Hills, marked down once a minute what the students were doing as they studied. A checklist on the form included: reading a book, writing on paper, typing on the computer—and also using email, looking at Facebook, engaging in instant messaging, texting, talking on the phone, watching television, listening to music, surfing the web. Related

Millennial Consumers: Engaged, Optimistic, Charitable [STUDY] A study comparing Millennials with non-Millennials sheds light on some of the key behaviors and attitudes of the generation. Currently numbered at 79 million — and growing in influence — Millennials are expected to outnumber the Baby Boomer population 78 million to 56 million by 2030. The Boston Consulting Group recently surveyed 4,000 Millennials aged 16 to 34, as well as 1,000 non-Millennials aged 35 to 40. The report's complete findings are available online. Facebook: Is this any place for the not-so-self-assured to make friends? Facebook, the social networking giant that connects 845 million people to one another, may be a jolly gabfest for the self-assured. But for those who suffer from low self-esteem, it appears to be a rather nasty trap, luring such people into self-disclosures that prompt many a Facebook friend to agree with their low opinion of themselves. A new study, set to be published in the journal Psychological Science, explored the dynamics of friendship on Facebook to see what benefits or pitfalls the site might offer to a population that could use the propping up of a few new friends: those who think poorly of themselves, fear judgment by others and are prone to social isolation and depression. Enlisting a slew of undergraduates for three separate studies, they found that those with low self-esteem are encouraged and emboldened by Facebook's capacity to provide a forum for social interaction that doesn't risk awkward face-to-face communication.

With Tech Tools, How Should Teachers Tackle Multitasking In Class? Important research compiled on the effects of students multitasking while learning shows that they are losing depth of learning, getting mentally fatigued, and are weakening their ability to transfer what they have learned to other subjects and situations. Educators as well as students have noticed how schoolwork suffers when attention is split between homework and a buzzing smartphone. Many students, like Alex Sifuentes, who admit to multitasking while studying, know the consequences well.