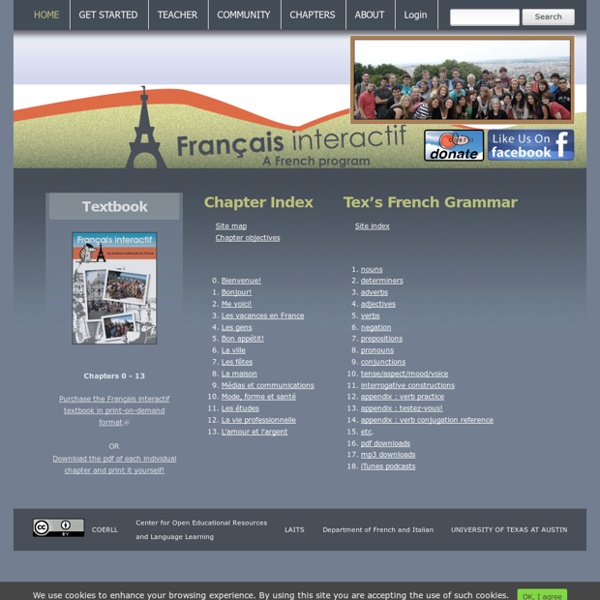 Welcome to the new Fi community website News and important updates... Français interactif's developers are excited to announce a new website, Voices for Openness in Language Learning, http://sites.la.utexas.edu/voices/. Read stories of Open Educators who are using Français interactif and other OER in their classrooms and consider adding your own voice to support the open education movement! Textbook

C’est Versus Il Est You cannot translate “c’est” = ‘it is’, “il est” = ‘he is’. In French, both “il est” and “c’est” translate as ‘it is’, ‘he is’. What matters is what comes next: a noun or an adjective. This rule is not easy for English speakers: it’s already hard enough to refer to a thing by him or her, it is even harder to use “c’est” + a person It sounds in English like you are saying ‘it’s’ + person… very very bad… You need to train a lot on this concept before it becomes natural to you. Download a great one page cheat sheet of this c’est ≠ il est lesson: PDF France in America / La France en Amérique About the Project Conceived in partnership with France’s national library, the Bibliothèque nationale de France, France in America /France en Amérique is a bilingual digital library made available by the Library of Congress. It explores the history of the French presence in North America from the first decades of the 16th century to the end of the 19th century. Through direct digital access to complete books, maps, prints, and other documents from the collections of the partner libraries, the project illuminates two major themes in the history of relations between France and the United States: the role played by France in the exploration and settlement of the continent and its participation in several events which indelibly marked the history of the United States: the French and Indian War, the American Revolution, and the Louisiana Purchase.

Les gestes français Create a quiz in minutes with QuizRevolution easy online tools. Make quiz widgets perfect for business marketing. Adds interactive website or blog content. Create online quizzes to socialize, share and promote. French language learning games All French language learning exercises are completely free to use, do not require registration, and are suitable for both school kids and adult language learners. French language acquisition games that French learners can study with, that teachers can incorporate into lesson plans, or that can be used used in homeschooling environments. An introduction to listening, reading, comprehension and communication in the French language. Each French study topic includes word lists with audio for learning the correct French pronunciation, and practice games for testing your learning progress.

1000 Most Common French Words - Top French vocabulary Written by Administrator Friday, 19 February 2010 10:29 When starting to learn French, it is always a good idea to memorize the most common words first. This will enable you to understand many more situations than if you were leaning your French vocabulary from random sources.

Definite Demonstrative Pronoun The definite demonstrative pronoun is a compound of the demonstrative adjective ce (this, that…[noun]) and the third-person tonic pronouns lui (he-him), elle (she-her), eux (they-them, masc.), elles (they-them, fem.), thus: The ce part makes the forms demonstrative (= pointing); the lui, etc. part makes them definite, i.e., having a definite gender (masculine or feminine) and number (singular or plural), which is to say that these forms stand for a specific noun, while pointing to a particular case of it. Of a plurality of persons or things, which one or ones do you mean? Answer: “The one(s)…”

Chartres: Cathedral of Notre-Dame - Image Collection Chartres Cathedral is among the best preserved of the major French cathedrals, with extensive programmes of sculpture and stained glass. It was a major site of pilgrimage in honour of the Virgin Mary, to whom the cathedral is dedicated. This website provides access to a comprehensive collection of images and detailed descriptions of Chartres Cathedral.