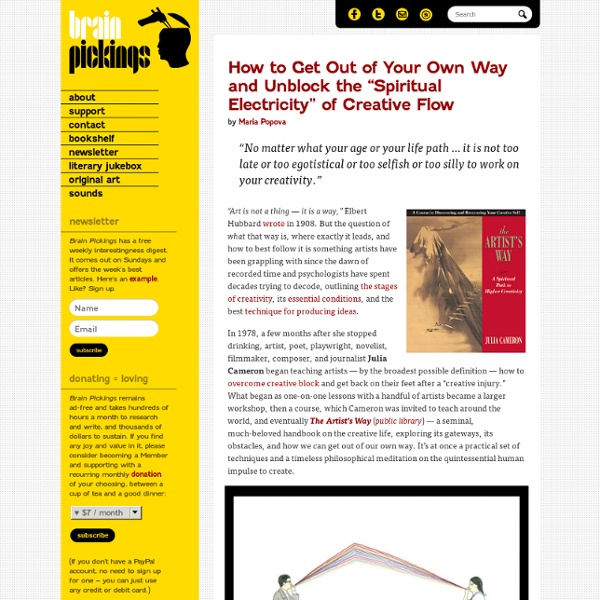 by Maria Popova “No matter what your age or your life path … it is not too late or too egotistical or too selfish or too silly to work on your creativity.” “Art is not a thing — it is a way,” Elbert Hubbard wrote in 1908. But the question of what that way is, where exactly it leads, and how to best follow it is something artists have been grappling with since the dawn of recorded time and psychologists have spent decades trying to decode, outlining the stages of creativity, its essential conditions, and the best technique for producing ideas. In 1978, a few months after she stopped drinking, artist, poet, playwright, novelist, filmmaker, composer, and journalist Julia Cameron began teaching artists — by the broadest possible definition — how to overcome creative block and get back on their feet after a “creative injury.” Art by Sydney Pink from 'Overcoming Creative Block.' Writing in the introduction to the 10th anniversary edition, Cameron adds to the most beautiful definitions of art: Related:  mystique

6 Things {Sexy Consciously Awake} Women Want From Sex About Me I am a lover of words and all things true. I am an awake women who will not be held down. I am here to do great things for what other reason is there to live and breathe. “If you want to be the kind of lover women never forget, then it’s time to seriously educate yourself on the art of sex. Contrary to popular belief, women are not less sexual than men, we’re just wired differently. While men can get an erection and go from zero to hero in less than five minutes, most women need a whole heck of a lot more than that to feel sexually satisfied. Let’s get one thing straight: women love sex. Men, do you want to see your woman’s body convulsing in orgasms? Then listen up! “Consciously awake women want more than physical sex. You are more than your physical body, which is but one level of your existence. Physical sex will only take you so far. When two people connect energetically – not just physically – MAGIC happens. “Consciously awake sex transcends basic sex on ALL LEVELS. MEN!!

Joan Didion on Keeping a Notebook by Maria Popova “We are well advised to keep on nodding terms with the people we used to be, whether we find them attractive company or not.” As a lover — and keeper — of diaries and notebooks, I find myself returning again and again to the question of what compels us — what propels us — to record our impressions of the present moment in all their fragile subjectivity. From Joan Didion’s 1968 anthology Slouching Towards Bethlehem (public library) — the same volume that gave us her timeless meditation on self-respect — comes a wonderful essay titled “On Keeping a Notebook,” in which Didion considers precisely that. Though the essay was originally written nearly half a century ago, the insights at its heart apply to much of our modern record-keeping, from blogging to Twitter to Instagram. Portrait of Joan Didion by Mary Lloyd Estrin, 1977 After citing a seemingly arbitrary vignette she had found scribbled in an old notebook, Didion asks: Why did I write it down? What, then, does matter?

Character Strengths and Virtues The strengths and virtues[edit] CSV defined character strengths as satisfying most of the ten following criteria. Character strengths are The introduction of CSV suggests that these six virtues are considered good by the vast majority of cultures and throughout history and that these traits lead to increased happiness when practiced. The authors draw from the writings of various thinkers. Practical applications of positive psychology include helping individuals and organizations correctly identify their strengths and use them to increase and sustain their respective levels of well-being. Finally, other researchers have advocated grouping the 24 identified character traits into just four classes of strength (Intellectual, Social, Temperance, Transcendent) or even just three classes (without Transcendence). List from the book[edit] The organization of these virtues and strengths in the book is as follows.[1] Relation to virtue ethics[edit] See also[edit] References[edit] External links[edit]

a good question - my attempt in answering it Children of Hags: photographer captures heterochromians with different-coloured eyes – Llamas' Valley By Llamas' Valley | “Heterochromia – Children of Hags” is a conceptual photography project by Amsterdam based Lithuanian photographer and Llamas’ Valley contributor Maria Cavali. The photographer keeps looking for people who have differently coloured eyes and photographs them. The project started as a conceptual idea of an identity project. It continued as mythological research and now it has developed into something extremely adventurous. Maria says she feels absolutely in love with all the people she photographs and the amazing stories she’s been able to hear and share. The website of “Heterochromia – Children of Hags” is coming soon.

PostSecret Study Finds 1 in 3 Americans Have Been Implanted With RFID Chips: Most Unaware Tiny RFID chips can be implanted anywhere in the body, including during dental work. Scientists at the Wyoming Institute of Technology (WIT) have determined that a shocking 1 in 3 Americans has been implanted with an RFID microchip. In an article published this week, they detail a study of nearly 3000 individuals, in which they identified nearly 1000 individuals that had been implanted with an RFID chip. Lead scientist on the study, John Brugle, Ph.D. offered the following: We were motivated to perform this study by all of the public interest in RFID implantation and fears that it would be common place. The study looked both at the prevalence of RFID implantation, as well as the common implantation locations. source Founder of WorldTruth.Tv and WomansVibe.com Eddie (5134 Posts) Eddie L. is the founder and owner of WorldTruth.TV.

The 7 Laws Of Attraction By following these 7 essential life principles and making conscious choices with your thoughts, words, and actions...you are certain to attract the same right back to you. Did you know there were 7 Laws Of Attraction? Well, it was a surprise to me. Though after I sought more information about the 7 Laws of Attraction, I found that they really are just individual elements broken down into subsets of the main Law. If you read them closely, they are familiar concepts included within the best Law of Attraction teachings. They teach that we attract things into our lives based on our beliefs (being), thoughts, words and actions. When the tools are used in that specific order, that is how we are able to consciously create our world. Here Are The 7 Laws Of Attraction 1) The Law of Manifestation: Consciousness is always a choice. 2) The Law of Magnetism: We can only attract the same kind of energy frequency that we put out ourselves. 3) The Law of Pure Desire (or Unwavering Desire):

3 Ways to Remember Your Past Lives Edit Article1,198,361 views 77 Editors Edited 2 days ago Three Methods:Do It YourselfHypnotherapyBecome Metaphysical Have you been an astronaut? A pioneer? Ad Steps Method 1 of 3: Do It Yourself 1Prepare the room. 10Return to the present. Method 2 of 3: Hypnotherapy 1Visit a hypnotherapist. 2Congratulations! 1Get religion. We could really use your help! Can you tell us aboutcareer development? career development how to write a five-year plan Can you tell us aboutmale hobbies? male hobbies how to make a man cave Can you tell us aboutAdobe Photoshop? Adobe Photoshop how to swap faces in Photoshop Can you tell us aboutSamsung mobile phones? Samsung mobile phones how to reset a Samsung Galaxy Ace Tips If you discover something very disturbing in your past life, always remember that aura around you. Warnings Realize that some pretty weird things can happen during past-life regression and self-hypnosis.

Why you really should keep a journal, no matter how cheesy that sounds | News If you've spent any significant time reading books or articles on the "science of happiness", you'll have encountered what I've long thought of as the Cheesiness Problem. It's an inescapable fact that some of the most thoroughly evidence-backed techniques for enhancing one's mood are also the most excruciatingly embarrassing – the sorts of things that those of us who imagine ourselves to be rational, sceptical types would never dream of confessing to. This is awkward, since (as I've written before) it means having to choose between maintaining a pose of sardonic detachment or doing what actually works. Anyway, this problem just got worse. Researchers led by Elizabeth Broadbent, a senior lecturer in health psychology at the University of Auckland in New Zealand, studied 49 healthy senior citizens, aged 64 to 97. So, yes, it might be a worthwhile idea to start keeping a journal, however appalling that sounds.