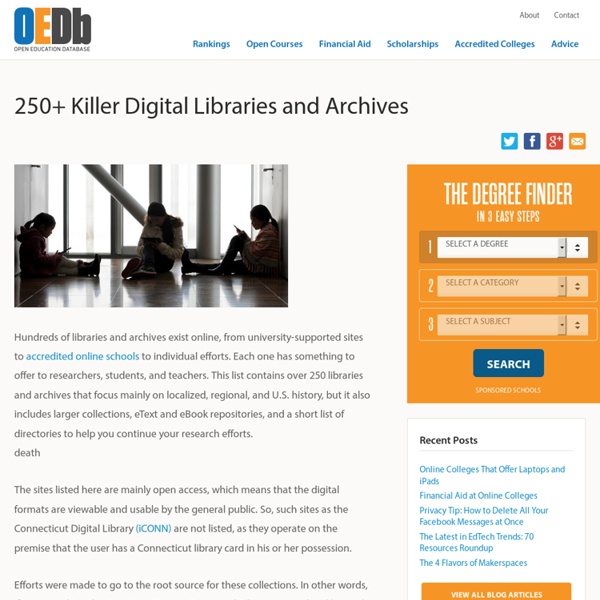 Hundreds of libraries and archives exist online, from university-supported sites to accredited online schools to individual efforts. Each one has something to offer to researchers, students, and teachers. This list contains over 250 libraries and archives that focus mainly on localized, regional, and U.S. history, but it also includes larger collections, eText and eBook repositories, and a short list of directories to help you continue your research efforts. death The sites listed here are mainly open access, which means that the digital formats are viewable and usable by the general public. So, such sites as the Connecticut Digital Library (iCONN) are not listed, as they operate on the premise that the user has a Connecticut library card in his or her possession. Efforts were made to go to the root source for these collections. Localized Collections The sites listed below focus on a certain state’s towns, cities, counties, or regions within a given state. Alabama Alaska Arizona Arkansas Iowa

The Importance of Given Names In genealogy we usually concentrate on surnames since they are the most important way of identifying people who are related. A surname is usually inherited and, while it may be changed, some form of it is usually retained. Given names are more important in a way because they represent a voluntary choice by the parents or, sometimes, by an individual. A name is usually not given lightly. It represents thought and feelings and can be significant to the researcher.

Blog Archive » The Fibonacci Spiral I don’t consider myself just a scrapbooker, photographer or designer. I consider myself an artist. It is not just cause I went to art school or that I like to create or that I appreciate art. Maybe it is all of these mixed together and maybe some other things mixed in there that I cannot explain. I see so many creative things around that inspire me.

Mayan hieroglyphic writing Mayan hieroglyphic writing, system of writing used by the Maya people of Mesoamerica until about the end of the 17th century, 200 years after the Spanish conquest of Mexico. (With the 21st-century discovery of the Mayan site of San Bartolo in Guatemala came evidence of Mayan writing that pushed back its date of origin to at least 300 or 200 bc.) It was the only true writing system developed in the pre-Columbian Americas. Mayan inscriptions are found on stelae (standing stone slabs), stone lintels, sculpture, and pottery, as well as on the few surviving Mayan books, or codices. The Mayan system of writing contains more than 800 characters, including some that are hieroglyphic and other phonetic signs representing syllables.

30 Fantastic Websites To Lose Yourself In If you follow me on Twitter you might know that I moved to London last September. You might also know that since then I’ve had nothing but trouble trying to get an Internet connection set up in my home. Fortunately, last week I finally got everything up and running and to mark my triumphant return to the world of the Internet I went a little crazy and shared 30 of my favourite websites on Twitter. The majority of them are single-serving sites. Ancestry Wiki: Specific Databases & Indexes From Ancestry.com Wiki This article originally appeared in "General References and Guides" by Kory L. Meyerink, MLS, AG, FUGA in The Source: A Guidebook to American Genealogy The following list of specific databases and indexes is organized alphabetically.

Learn to Use Google in Genealogy Searches - Google Genealogy Tips Since the Google search engine went live in September 1999, it has changed the way people search the web. Today, many genealogists use Google for their genealogy internet and surname queries, and for good reason. Not only does Google produce accurate and relevant search results, Google is extraordinarily fast and flexible. Over 100 Incredible Infographic Tools and Resources (Categorized) This post is #6 in DailyTekk’s famous Top 100 series which explores the best startups, gadgets, apps, websites and services in a given category. Total items listed: 112. Time to compile: 8+ hours. Follow @DailyTekk on Twitter to make sure you don’t miss a week! Update: Be sure to check out our latest post on infographics: Infographics Are Everywhere – Here’s How to Make Yours Go Viral. I love a good infographic!

The Good, The Bad, And The Food Allergies: Bette Hagman - The Gluten Free Gourmet It was brought to my attention through a couple of the Gluten Free Blogs that I read that Bette Hagman recently passed away.When my son was first diagnosed with food allergies, one of them being wheat, the name that kept popping up over and over again in my Google searches was Bette Hagman. Bette Hagman, also known as the Gluten Free Gourmet, wrote numerous cookbooks about cooking gluten free (I have a few). She also developed her own gluten free flour mixes distributed by Authentic Foods. Bette was diagnosed with Celiac Disease over 25 years and after that dedicated her life to helping other people with Celiac Disease or wheat intolerance eat healthy and eat happy. She was actually one of the first Gluten Free foodies.

100 Best Open Science Courses on the Web It’s never too late or too early to start expanding your knowledge of science. With the wealth of free courses available on the web, that goal is easier than ever to achieve and can often be done without even leaving the house. The courses listed here will help you get started, offering resources on a wide variety of scientific fields from those that delve into the laws of the universe to those that explain the chemical reactions taking place in your own kitchen. Physics Use these courses to learn about both the basics and some of the more advanced topics in physics. Fundamentals of Physics: In this course Professor Ramamurti Shankar will teach you about the basic principles of physics.