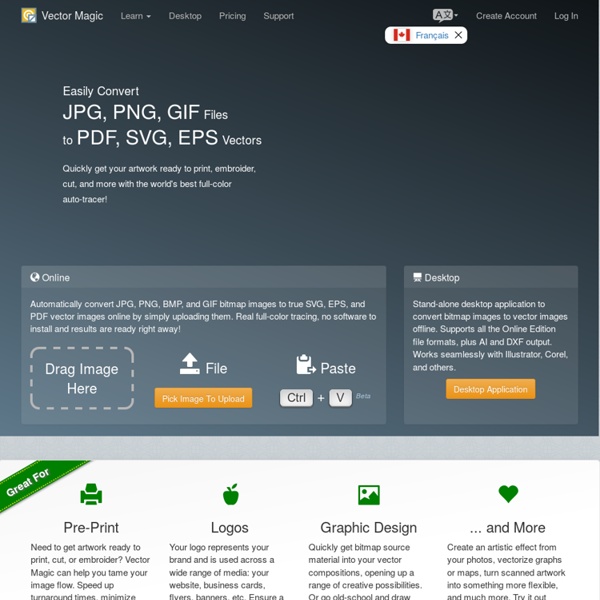 Editor Description Acrylic glass GS sheets are produced by means of liquid PMMA polymerizing between two sheets of glass. This process produces a material with outstanding characteristics: it is fracture resistant (compared to glass), weather resistant, highly transparent and lends itself to being shaped and processed. Please note Please take into account the thickness tolerances of acrylic glass.

Using SVG Learn Development at Frontend Masters SVG is an image format for vector graphics. It literally means Scalable Vector Graphics. Basically, what you work with in Adobe Illustrator. Max Riffner: How I Create Comics in Illustrator My weblog work journal. »Archives »Links How I Create Comics in Illustrator After suffering through 60 plus pages in Photoshop on a beige Mac G3, I had had enough. I was creating Golden Boy in a twelve step process:

Visual Thinking reading list I’ve had a lot of people ask me for book recommendations so I am putting together this list of suggested reading on various topics. I will add to this as I have time. Hover over each link to see a thumbnail of the book cover. Tree fantasy source: www.youthwork-practice.com | 2000 Games, Ideas and more for Youth Work only for private using skip the content and jump to the navigation Material: You need the following materials: Card Paper sticky tape Poster paints thinned with water (available in craft stores) A small natural sponge A pipette A straw

Fabripod This is a mockup of the lamp configurator I’m putting together for my line of “Urchin” lamps. When its finished, people will be able to set up their own lamp the way they want it, see how much it will cost, and buy it using paypal – all through the same online tool. The mockup opens in a new window since I haven’t figured out how to embed processing into wordpress yet. Use the sliders on the left to control options like scale and materials. Using source maps with Sass 3.3 One of the exciting new features in Sass 3.3 that every developer should take advantage of is source maps. As CSS pre-processors, minifiers, and JavaScript transpilers have become mainstream it is increasingly difficult to debug the code running in the browser because of differences with the original source code. For example, if you use CoffeeScript (which compiles to JavaScript) you won't see CoffeeScript while debugging in the browser. Instead, you'll see compiled JavaScript. The same problem exists for Sass which compiles down to CSS. Source maps seek to bridge the gap between higher-level languages like CoffeeScript and Sass and the lower-level languages they compile down to (JavaScript and CSS).

Photoshop plugins abound at the PlugPage, download Macintosh and Windows freeware, shareware, and demo Photoshop plugins and filters - Windows Plugins - ProJPEG 6.0 is the best JPEG plugin around. It blows everything else away. You really want this one. - 297K MRWFormatDemo.zip allows the user to use all the benefits of shooting in RAW format, then gives you complete control over every step of image processing.- 1.21Mb

Visual Thinking What is Visual Thinking? Visual thinking is a way to organize your thoughts and improve your ability to think and communicate. It’s a great way to convey complex or potentially confusing information. 19 Factors That Impact Compositional Balance Imagine a boulder leaning too far over the cliff’s edge. Seeing that boulder you think it should come crashing down the mountainside. It’s out of balance and you feel the tension of the impending crash.

Voronoi Bookshelf Prototype, an experiment in interactive, generative design Posted by Hero on Mar 22, 2012 in Configurable Design, Creative Code, Custom Design, Generative Design, Mass Customization What is this? This is a prototype. An experiment in generative, collaborative design. The prototype consists of two parts: a generator and an object. Live Editing Sass and Less in the Firefox Developer Tools Sass and Less are expressive languages that compile into CSS. If you’re using Sass or Less to generate your CSS, you might want to debug the source that you authored and not the generated CSS. Luckily you can now do this in the Firefox 29 developer tools using source maps. The Firefox developer tools use source maps to show the line number of rules in the original source, and let you edit original sources in the Style Editor. Here’s how to use the feature:

Digital Comic Book Lettering When I finally caughed up the big bucks for Adobe CS2 back in 2003 I started down the path of becoming the universal comic artist. Until that time I was a newcomer and had been just inking comic pages and manually lettering. While I love the smell of ink and black fingers, this computer stuff massively enhanced what I could do with comics and in a quarter of the time. I could not only letter, I could color and prepress books for any projects I was working on. Inking was still easier on the board, but that changed later in 2009 when I found Manga Studio. Now I'm using both Adobe Illustrator CS5 and Manga Studio EX for lettering.