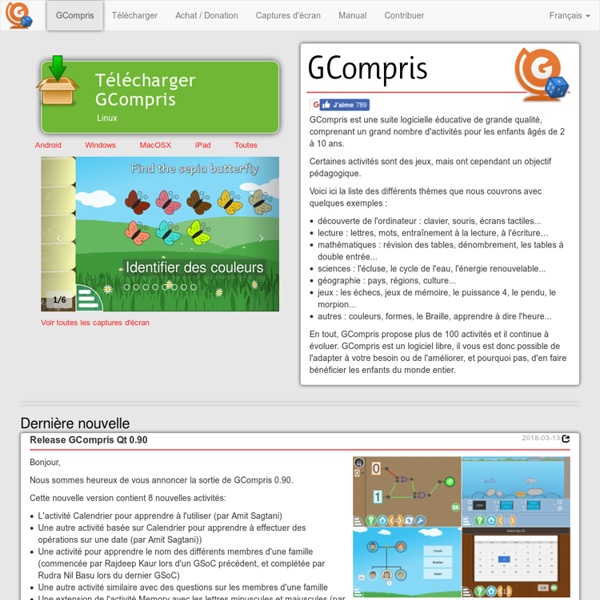 Free Mind From FreeMind The latest stable release of FreeMind is 1.0.0. Downloading and installation instructions are given below. Installing FreeMind Wink - [Homepage] Here is a sample Flash tutorial created by Wink. Click the green arrow button to start viewing it. Cageless Thinking: Innovation and Creativity in Education 1. It’s not a laptop The biggest and most oft-heard criticism of the iPad usually revolves around it not behaving like a desktop PC or laptop. The people making this complaint are simply missing the point. Apple aren’t trying to make a laptop replacement, why would they? They make a couple of extremely good ones!

Access Wikipedia Content Offline - Kiwix Kiwix is an offline reader for Web content. It's especially thought to make Wikipedia available offline. This is done by reading the content of the project stored in a file format ZIM, The ZIM file format, an open, standardized file format to store Wiki content efficiently for offline usage Kiwix Features: * Multilanguage: en, fr, es, de, it, ar, he, pt * ZIM library management outside the profile * Windows support & installer * ZIM HTTP server called "kiwix-serve" * Command line indexation tool called "kiwix-index" * Allow drag&drop over the UI to open a ZIM file * Autodection of the UI locale at the first start (GNU/Linux only) * "Recently open" menu * Internal library of ZIM (to be able to manage many ZIM files) * New "Save Page" (in files) * New "Print as PDF" feature * First result is now only loaded with a pretty good score There are two supported platforms for the reader, Windows and Linux.

Dia a drawing program Welcome to Dia's new homepage. Dia is a GTK+ based diagram creation program for GNU/Linux, MacOS X, Unix, and Windows, and is released under the GPL license. Dia is roughly inspired by the commercial Windows program 'Visio,' though more geared towards informal diagrams for casual use. It can be used to draw many different kinds of diagrams. It currently has special objects to help draw entity relationship diagrams, UML diagrams, flowcharts, network diagrams, and many other diagrams. It is also possible to add support for new shapes by writing simple XML files, using a subset of SVG to draw the shape. Find Free Images Quickly With Compfight Creative Commons licensed photos are a sort of internet miracle: By providing an easily-understood syntax for attribution and permissions, they make it possible to add visual interest to blog posts, web sites, syllabuses, presentations–anything you like, really. They also facilitate remixes and other forms of creative adaptation (or deformation), which can be useful in a wide variety of teaching and research contexts. We’ve written about Flickr & Creative Commons before: I explained how to do creative-commons limited searches, and Julie suggested integrating creative commons-licensed material in your classroom. I also reviewed Wylio, a website that searches Flickr.

Exploring Mobile Information Habits of University Students Around the World When was the last time you saw a 20-year-old without a phone in his or her hands? Ever wonder what college students are doing all the time? Welcome to A TETHERED WORLD, a global study that found out that not only are students absolutely tethered to their phones, they are absolutely tethered to their friends on phones. Draw Freely. Inkscape at the Libre Graphics Meeting April 12, 2014 The Inkscape project mustered nine developers, translators and document writers for a productive meeting. As well as countless user interactions over the course of the five day event. This is what happened... Read more...

yEd - Graph Editor "As a software developer, I used to use Graphviz for my code comprehension needs. While its compact format has its advantages, it was just too much effort to input data - particularly relationships. I wanted to be able to create relationships by dragging my mouse from one node to another. This is exactly how yEd works.You don't have to sacrifice the longevity of plain-text that Graphviz files offer. yEd works entirely on the XML-based GraphML format. Swift.org - Download Swift Latest Development Snapshots Development Snapshots are prebuilt binaries that are automatically created from mainline development branches. These snapshots are not official releases. Twitter as a tool for learningScoop Social media often gets a bad rap for being a driving force behind people falling out of touch, neglecting in-person relationships, and reducing productivity for people around the world. Naysayers blame it for shorter attention spans and proliferation of bad grammar, and the most vehement of those naysayers believe that social media has led to privacy being a thing of the past. To be fair, there have been many times where I’ve been trolling my Twitter feed only to be thoroughly horrified by TMI moments and tHingz Speld lIKE THIZ. But if you look past the rough surface Twitter can sometimes present, you find an amazing tool for learning. Last time I looked, there were 141.8 million twitter accounts in the USA alone, and there are 175 million tweets being published every day. Twitter is a global community, which means global perspective and opinions about the topics you care about, and outside perspective is good.