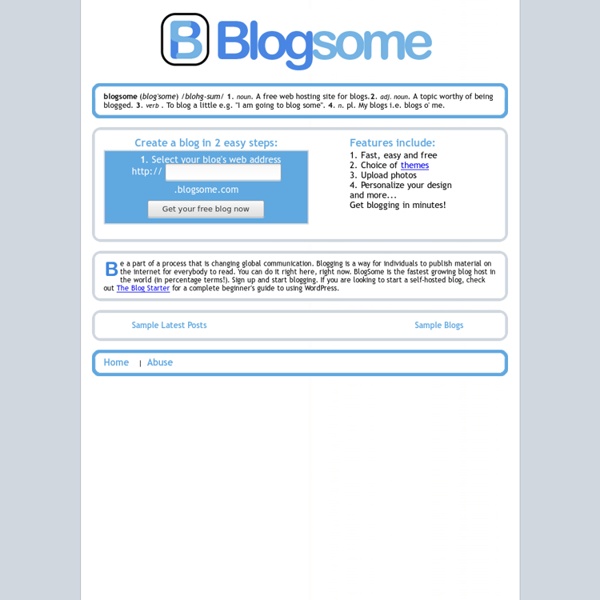 Film Noir Construction Kit By Jonathan Wallace jw@bway.net You and I live on the margins of some larger organization which is itself on the margins. The place where we live has seen better days. We are not particularly happy with our status and we want to get out. There is no way to get out without money and in order to get it, we decide to become partners with each other in a dangerous enterprise. The enterprise is to be carried out in ambiguous cooperation with the organization that we depend on and fear. Broadcom 4312 for LMDE Out of the box the Broadcom 4312 doesn't work on LMDE nor most of the distros out there. With LM or Ubuntu you can use jockey to install the drivers with Debain it isn't hard it just takes a few more steps. So now we'll see if we can get your Broadcom 4312 wifi working.

If you code HTML, Zen Coding will change your life If you write HTML for a living, and you don't know Zen Coding yet, you are missing out big time. This is basically the coolest thing I've seen all week. I have been using it for a few days now; at first it seemed kind of gimmicky and I wasn't sure I could grasp the syntax, but today I really got to explore it, and woah is it awesome. Okay, I'll stop tripping over myself with excitement over here and try to tell you what this thing does, in a nutshell: It expands abbreviations into complete HTML structures (divs, tables, cells, links, lists), and does it in the most freaking intelligent way I have seen in a long time. I'm serious! For instance, that arcane-looking string of text in the screenshot expands with a single keystroke into this:

High Heels on Wet Pavement: Film Noir and the Femme Fatale Femme fatale—is defined as “an irresistibly attractive woman, especially one who leads men into danger or disaster”. To me the most engaging semblance of a “femme fatale” is the stunning image of Lana Turner, as the camera pans from her ankles upward in that breathtaking shot from The Postman Always Rings Twice 1946. Extremes The most consistent aspect of film noir, apart from its visual style, is its protagonists. If a usable definition of the noir protagonist is to be formulated, it must encompass its most intrinsic character motif—alienation. The undercurrent that flows through most high noir films is the failure on the part of the male leads to recognize the dishonesty inherent in many of noir’s principal women.

HOW TO: Install Broadcom-sta (wl) driver in LMDE This HOW TO describes enabling support for WiFi devices based on Broadcom 4311/4312/4313/4321/4322/43224/43225 chipsets - using Broadcom's hybrid device driver - on Debian systems. This tutorial was prepared shortly after the release of LMDE 201009 and draws heavily on THIS Debian Wiki page. Support of these chipsets is possible using a driver (wl) made available by the vendor, which includes a binary-only component targeted for the x86 or x86-64 architecture.

Lesson: Object-Oriented Programming Concepts (The Java™ Tutorials > Learning the Java Language) If you've never used an object-oriented programming language before, you'll need to learn a few basic concepts before you can begin writing any code. This lesson will introduce you to objects, classes, inheritance, interfaces, and packages. Each discussion focuses on how these concepts relate to the real world, while simultaneously providing an introduction to the syntax of the Java programming language. What Is an Object?

Pedro Almodovar Matador, 1986 A dashing former matador named Diego Montes (Nacho Martínez), prematurely retired after a career-ending injury, rehearses the principal tenets of the art of the kill at a converted classroom on his estate to a group of aspiring bullfighters, including an unlikely, hypersensitive student named Angel Giménez (Antonio Banderas). The training lecture then cuts to the image of a beautiful, enigmatic woman sitting on a park bench, María (Assumpta Serna) as she initiates contact with an anonymous man innocuously passing by, follows him back to an apartment, and, at the height of physical intimacy, stabs him with a long ornamental pin behind the nape of the neck - in the region between the shoulder blades defined in bullfighting as the cleft of the clods. Pedro Almodóvar creates a highly sensual, deliriously overripe, and stylistically audacious portrait of love, death, fate, and violence in Matador. © Acquarello 2003.

Ubuntu – DTS to AC3 "By luck, I stumbled upon your site, and of course I wanted to try it out. I went on to deposit $500 on OneTwoTrade, then opened 5 positions and won 4. Took out the $500 and still have the profit of $288 to trade with. This is a great system you got there Sir, I definitely owe you one." Shelly Green - New York Beginning Game Development: Part I – Introduction Part I – Introduction Welcome to the first article of an introductory series on game programming using the Microsoft .NET Framework and managed DirectX 9.0. This series as aimed at beginning programmers who are interested in developing a game for their own use with the .NET Framework and DirectX.

kamera.co.uk - book review - Cinema Italiano: The Complete Guide from Classics to Cult - Leo White Cinema Italiano: The Complete Guide from Classics to Cult By Leo White Cinema Italiano makes a bold claim: that it is the complete guide to Italian cinema from classics to cult. This statement initially seems somewhat ambitious considering the enormous output of that country's cinema. Advanced Programming Languages Introduction Research Syntax Semantics Static Semantics ( Type Theory ) Six ways to write more comprehensible code I learned to write, clear, maintainable code the hard way. For the last twelve years, I've made my living writing computer games and selling them over the Net using the marketing technique that was once charmingly known as shareware. What this means is that I start with a blank screen, start coding, and, a few tens of thousands of lines of code later, I have something to sell.

Bill the Lizard: Books Programmers Don't Really Read Mark Twain once said that a classic novel is one that many people want to have read, but few want to take the time to actually read. The same could be said of "classic" programming books. Periodically over on Stack Overflow (and in many other programming forums) the question comes up about what books are good for programmers to read. The question has been asked and answered several times, in several different ways.

C Craft - Chapter 1. Introduction C is the desert island language. This is my favourite statement from a talk Rob Pike gave in 2001. Despite its age, despite many flaws, C is still the de facto standard, the lingua franca. Why? As with other older languages, inertia is partly to blame, but this cannot be the only reason. C must possess a near-perfect balance of vital language features.