Opening up education through innovation 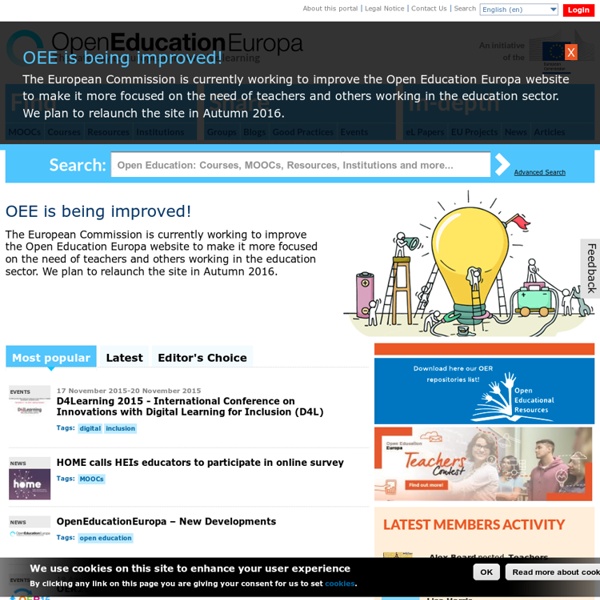 6 of The Best Web Tools for Organizing and Managing Citations, References and Bibliographies April 1, 2015 One of the onerous parts in essay and academic writing is the bibliography section. Managing, organizing and citing references can sometimes be a real challenge especially if you don't keep track of what and who you cite. The last thing you would want after a strenuous writing task is a messy bibliography with one reference missing page numbers the other needs publication date or, worse of all, having to go back to your sources to check for the source of that quotation you included in your conclusion. If you find yourself constantly grappling with problems such as these, the web tools below are absolutely something you might need to consider. These are some of the best applications for organizing, managing, and publishing bibliographies, citations and references.

10 Universities Offering Free Science Courses Online Free online courses in science are offered by real schools. Learn which science courses are available, what topics they cover and which ones lead to real college credit. Online Science Courses for Credit Schools with free online science classes, such as though offered through OpenCourseWare programs, do not generally require students to register in order to gain access to course materials, but they also do not award college credit for completion.

MOOCs take their place in the corporate learning world According a report released by Technavio, the corporate e-learning market in the USA is predicted to reach a value of nearly $31 billion by 2020. Much of this can be attributed to the rapid advancement of technology, like mobile devices and cloud-based learning systems. Now, corporate learning is expanding to include free and low-cost learning opportunities to help bring more information into the workplace. A background on MOOCs 400 Free eBooks: Download to Kindle, iPad/iPhone & Nook Download 800 free eBooks to your Kindle, iPad/iPhone, computer, smart phone or ereader. Collection includes great works of fiction, non-fiction and poetry, including works by Asimov, Jane Austen, Philip K. Dick, F. Scott Fitzgerald, Neil Gaiman, Tolstoy, Dostoevsky, Shakespeare, Ernest Hemingway, Virginia Woolf & James Joyce.

How Google Docs' research tool removes drudgery from reports and presentations You’re frantically racing toward a deadline to complete a multi-page report or slideshow presentation, but research is slowing you down. Not tracking down the information so much as the constant bouncing between your work document and web browser, and cycling through the confusing morass of open tabs to find that webpage or image you need. If you use Google’s free office suite, there’s an easier way—a built in research tool that lets you search for the information you need and easily add it to the Google Doc or Google Slide you’re working on without having to leave the page. Here’s how to get started. Access the research tool Google offers three ways to access the research tool pane.

everything elearning. Core changes rarely come easy to existing systems. Change builds incrementally. First it builds on what exists – using existing models, approaches, language, and habits. But, as Kuhn suggested, periodically, we encounter such an array of anomalies in existing world views, that we must essentially reframe the space. Video was initially used as a tool to record stage productions.

Founder of Lynda.com Talks About Future of Learning Online (Video) - Kara Swisher - Media To Lynda Weinman, it’s funny that the online learning site she and her husband founded in 1995 suddenly seems like an overnight success. “Yes, only two decades in the making,” she joked at a lunch I had with her last week. But there certainly has been a big buzz around Lynda.com — named after Weinman — after the Carpinteria, Calif., company raised $103 million a month ago in its first major funding. And, last week, as part of a major expansion globally using that money, it bought Austria-based video2brain to add to its online course offerings in a range of computer and other skills, in a number of European languages. Author discusses new book, 'The Uberfication of the University' How much do Uber, Airbnb and other elements of the "sharing economy" explain the state of higher education? Quite a lot, according to Gary Hall, professor of media and performing arts at Coventry University, in Britain. He outlines his views in The Uberfication of the University, a short book (55 pages) published as part of the University of Minnesota Press Forerunners series on new ideas. Hall responded via email to questions about his book. Q: Many of the trends you reference (reliance on adjuncts who lack job security, state disinvestment in higher education) predate Uber and the sharing economy.

The Difference between Aliens, Demons and Fallen Angels The Difference Between Fallen Angels, Demons, Aliens, Jedi, and the Watchers By Sherry Shriner In these last days, the Bible says it will be a time of mass hybridization and the mixture and corruption of human DNA by fallen angels, also known as "Aliens." The government is and has been, conditioning the existence of aliens through Hollywood, science fiction, cartoons, and other sources. Research Strategies - AAA Shared Resource Guide - LibGuides at Indiana University-Purdue University Indianapolis Before you start entering any search terms, spend a few minutes trying to think of as many relevant terms and combinations of terms as you can. This will help you to avoid getting stuck in a rut with the first terms that come to mind. If you need help in coming up with terms, you may want to try the "Thesaurus" or "Subject Headings" features in the database you've chosen. Check out the "Help" or "Search Tips" to learn some of the search features specific to that database. Most databases provide similar features, but the methods may vary. Some common tricks:

Screencasting Software - ScreenFlow Overview - Telestream Highest Quality Recording ScreenFlow has the best screen recording available – whether you are recording multiple screens at once, or using retina displays. Built in Stock Media Library Spice up your videos with access to over 500,000 unique images, audio & video clips and more directly from within your ScreenFlow projects. iOS Recording Record your iPhone or iPad screen for high quality app demos. Should 'real' students do an online course on the side? Universities have started giving away their content free as "massive open online courses", with the satisfyingly ridiculous acronym mooc (I challenge you to say it three times with a straight face). Eleven top UK universities recently announced they were joining the Open University to launch FutureLearn, in a bid to catch up with the elite US institutions that have led the way in teaching huge numbers online. It all sounds great for people who, for one reason or another, can't go to a traditional university. But do moocs have anything to offer students already studying at a bricks-and-mortar institution?

LinkedIn doubles down on education with LinkedIn Learning, updates desktop site LinkedIn, the social network for the working world that now has some 450 million members and is in the process of being acquired by Microsoft for $26.2 billion, today took the wraps off its newest efforts to expand its site beyond job hunting and recruitment, its two business mainstays. The company has launched a new site called LinkedIn Learning, an ambitious e-learning portal tailored to individuals, but also catering to businesses looking to keep training their employees, and beyond that even educational institutions exploring e-learning courses. The new site was unveiled today in LinkedIn’s offices in San Francisco, and it comes about a year and a half after LinkedIn acquired online learning site Lynda.com for $1.5 billion. A large part of LinkedIn Learning is based on Lynda content, and goes live with some 9,000 courses on offer. LinkedIn education is available for LinkedIn Premium subscribers who look like they will get 25 new courses every week based on information on the site.