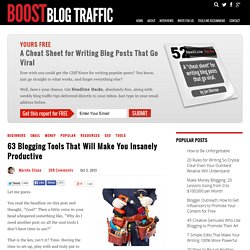 You read the headline on this post and thought, “Cool!” Then a little voice in your head whispered something like, “Why do I need another post on all the cool tools I don’t have time to use?” That is the key, isn’t it? 13 Things Mindful People Do Differently Every Day. It may have started as a trend among Silicon Valley tech companies, but mindfulness seems to be here to stay for all of us. 2014 has been called the "year of mindful living," and in the past several months, mindfulness has made headlines in seemingly every major print publication and news site. 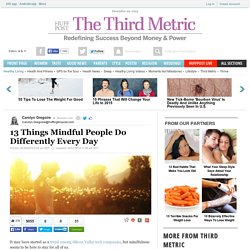 No longer an activity reserved for the new age set, the public is looking to mindfulness as an antidote to stress and burnout, technology addiction and digital distractions, and a sense of time famine and constant busyness. More and more research is legitimizing the practice, demonstrating that it may be an extremely effective intervention for a wide range of physical and mental health problems. 18 Apps Every Creative And Artist Type Should Download Right Now. Mobile devices like iPads and Androids have transformed the way we experience boredom. 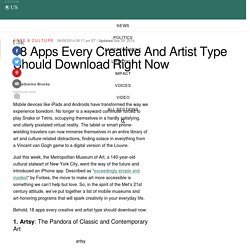 Mozilla: The Key To The Browser Is Individuality. According to Mitchell Baker, Chairperson of the Mozilla Foundation, the key to future of browser technology is making a browser unique to the person that uses it, giving control back to the user and allowing them to make the web for themselves. 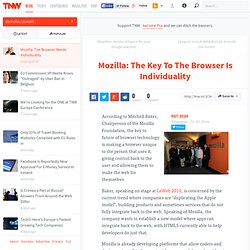 Baker, speaking on stage at LeWeb 2010, is concerned by the current trend where companies are “duplicating the Apple model”, building products and sometimes services that do not fully integrate back to the web. Speaking of Mozilla, the company wants to establish a new model where apps can integrate back to the web, with HTML5 currently able to help developers do just that. Mozilla in 2011: Focus on Performance, Video, Identity & App Stores. Yesterday, we also had a chance to interview Mozilla's chairperson Mitchell Baker at LeWeb in Paris. 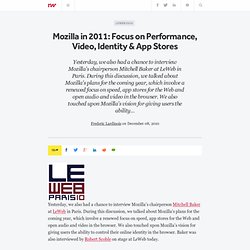 During this discussion, we talked about Mozilla's plans for the coming year, which involve a renewed focus on speed, app stores for the Web and open audio and video in the browser. We also touched upon Mozilla's vision for giving users the ability to control their online identity in the browser. Nokia Wants to Revolutionize the Mobile UI in 2011. Nokia plans to embrace a completely new approach to the mobile UI, and it plans to launch first devices based on the new approach with Meego in 2011, said Director of Design Strategy at Nokia Marko Ahtisaari at LeWeb conference in Paris today. 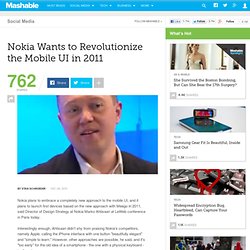 Interestingly enough, Ahtisaari didn't shy from praising Nokia's competitors, namely Apple, calling the iPhone interface with one button "beautifully elegant" and "simple to learn. " However, other approaches are possible, he said, and it's "too early" for the old idea of a smartphone - the one with a physical keyboard - to die out. He didn't give any details about the upcoming Meego-based smartphones, saying (quite cryptically) that he wants to give phone users a 'head up' experience again. MySpace: a bit of Mahalo with Youtube and Twitter thrown in? 8 December '10, 12:31pm Follow With all that has happened over at Myspace in the past few years I guess everybody holds their breath when their CEO takes the stage to say something, anything. 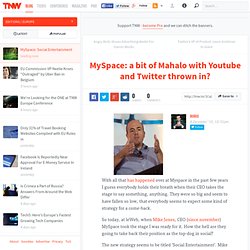 They were so big and seem to have fallen so low, that everybody seems to expect some kind of strategy for a come-back. So today, at leWeb, when Mike Jones, CEO (since november) MySpace took the stage I was ready for it. Angry Birds: We Have 40 People Working On The Game (Le Web) In an on-stage interview at Le Web 10 in Paris, Rovio CEO Mikael Hed talked about one of the most popular games ever to hit mobile phones all around the world: Angry Birds. 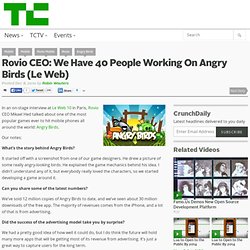 Our notes: What’s the story behind Angry Birds? It started off with a screenshot from one of our game designers. He drew a picture of some really angry-looking birds. Angry Birds Shows Advertising Model For Games Works. Angry Birds, the hilarious game originally developed for the iPhone, is the fastest selling paid iPhone game to date. 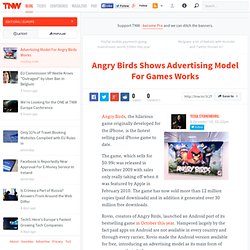 The game, which sells for $0.99c was released in December 2009 with sales only really taking off when it was featured by Apple in February 2010. The game has now sold more than 12 million copies (paid downloads) and in addition it generated over 30 million free downloads. Rovio, creators of Angry Birds, launched an Android port of its bestselling game in October this year. Hampered largely by the fact paid apps on Android are not available in every country and through every carrier, Rovio made the Android version available for free, introducing an advertising model as its main form of revenue on that platform.

Surprisingly, the advertising model has been shown to work extremely well for games, the Android app is already generating over $1 million each month in advertising. “The future will hold many more apps based on advertising revenue. PayPal Responds to WikiLeaks Controversy. On December 4, PayPal announced that it had permanently restricted the account of WikiLeaks founder Julian Assange. 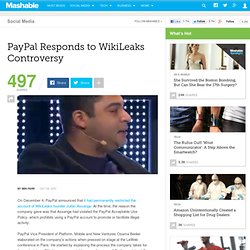 At the time, the reason the company gave was that Assange had violated the PayPal Acceptable Use Policy, which prohibits using a PayPal account to promote or facilitate illegal activity. Solar Impulse’s Fuelless Plane Is Innovation In Plane Form. Dr. Zynga Has Over 45 Million Daily Active Users. The creators of FarmVille are on a roll: not only has Zynga's newest game gained 3 million daily active users in just one week, but it has 45 million daily active users across all of its properties. Zynga’s CityVille Game Already At 3 Million Daily Active Users (Le Web) Zynga to launch Mafia Wars on Android this month. 9 December '10, 01:25pm Follow. Twitter VP Of Product Jason Goldman Steps Down (At Le Web) Our very own MG Siegler interviewed Jason Goldman, VP of Product at Twitter, at Le Web 10. Our notes: Siegler started off by asking about the new integrations Twitter launched yesterday. Goldman went over the enhancements, which include integrations in the details plane of #newtwitter with Instagram, YouTube, iTunes, and other services.