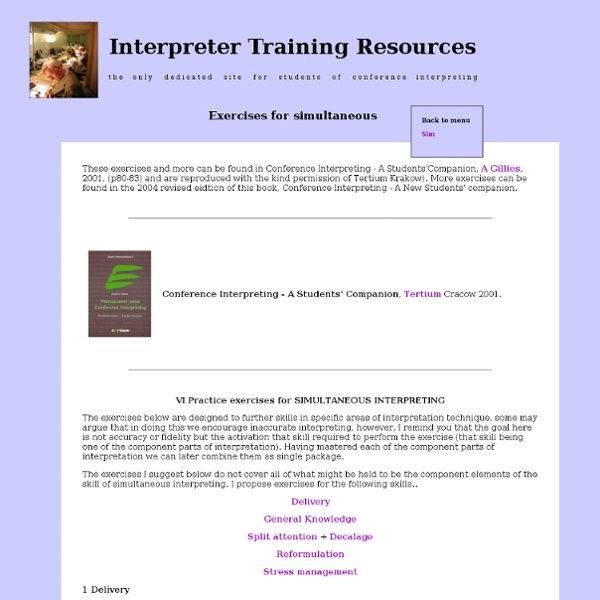 These exercises and more can be found in Conference Interpreting - A Students'Companion, A Gillies, 2001, (p80-83) and are reproduced with the kind permission of Tertium Krakow). More exercises can be found in the 2004 revised eidtion of this book, Conference Interpreting - A New Students' companion. VI Practice exercises for SIMULTANEOUS INTERPRETING The exercises below are designed to further skills in specific areas of interpretation technique, some may argue that in doing this we encourage inaccurate interpreting, however, I remind you that the goal here is not accuracy or fidelity but the activation that skill required to perform the exercise (that skill being one of the component parts of interpretation). Having mastered each of the component parts of interpretation we can later combine them as single package. The exercises I suggest below do not cover all of what might be held to be the component elements of the skill of simultaneous interpreting. Delivery General Knowledge WHY ?

The amazing brains of the real-time interpreters One morning this summer I paid a visit to the sole United Nations agency in London. The headquarters of the International Maritime Organization (IMO) sits on the southern bank of the Thames, a short distance upstream from the Houses of Parliament. As I approached, I saw that a ship’s prow, sculpted in metal, was grafted like a nose to the ground floor of this otherwise bland building. Inside I met a dozen or so mostly female IMO translators. They were cheerful and chatty and better dressed than you might imagine for people who are often heard but rarely seen.

Interpreters and Emotional Intelligence Details Published on Wednesday, 29 October 2014 10:20 Written by Diana Singureanu Rules for Comma Usage Use a comma to separate the elements in a series (three or more things), including the last two. "He hit the ball, dropped the bat, and ran to first base." You may have learned that the comma before the "and" is unnecessary, which is fine if you're in control of things. Why consecutive learning is important? “Although I’m retired from the Commission now I still do a bit of training now and again and I sometimes get asked why students of conference interpreting on university interpretation courses spend so much of their time learning how to do consecutive interpreting when practically all the work they’ll do later as a conference interpreter- assuming they get that far- will consist of simultaneous interpreting..the difference as I’m sure most of you know being that consecutive (as the name suggests) is done after the speech, using among other things your memory and the notes you have taken during the speech to be interpreted whereas simultaneous is done in a soundproofed booth wearing head-phones while the speaker is talking..which is probably how most laymen see interpreters and also how most professional interpreters might see themselves. Should students learn CONS before SIM? Dick Fleming is a former staff conference interpreter and trainer at the European Commission, Brussels. Like this:

Resources for interpreting students Training resources - Speech repository An e-learning tool which contains a collection of speeches organised by language, difficulty level, type of use, and subject.Access is granted to: - Universities M e d i c I n t e r p r e t e r s Medic Interpreters provide face-to-face interpreting by medically trained linguists to aid communication and the exchange of information between patients with limited English and health care professionals. Within today's multi-cultural society, the crucial role of a medical interpreter is invaluable to the UK health system. Our specially trained and experienced healthcare interpreters enable the accurate interpretation of medical information between patients and a medical professional faced with a language barrier. Engaged in a variety of environments and settings including Hospitals, private clinics and General Practices; our linguists interpret symptoms, medical histories, questions and concerns from patients to doctors.

University of Surrey - Guildford Why choose this course? This is the only programme in the UK that will help you acquire advanced interpreting skills to work confidently in all modes of interpreting (consecutive, simultaneous, dialogue and telephone/video-mediated), and in a variety of contexts. We are the first university to teach remote interpreting based on research in this area. What you will study